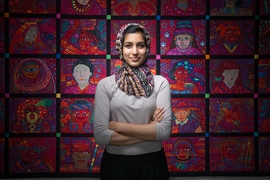 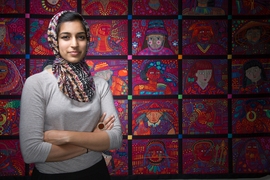 Graduate student Reshmaan Hussam has always seen economics as more than a collection of numbers: For her, it also entails history, health, and human behavior. Now, as a fifth-year PhD student in economics at MIT, she applies this outlook to understanding sanitation and hygiene behavior in the developing world, with an eye toward affecting policy and behavioral changes.

Economics first piqued Hussam’s curiosity in high school, when a summer course exposed her to the experimental and behavioral aspects of the field; since then, she’s kept empathy at the forefront of her work in modeling human economic interactions. And after picking up Max Weber’s “The Protestant Ethic and the Spirit of Capitalism” in college, she became acutely interested in how religion impacts economic choices.

Growing up with an uncle who managed a microfinance institution in Bangladesh — where Hussam still has family — gave her early exposure to this particular population’s financial needs and behaviors; as an undergraduate at MIT, she soon turned her research toward development economics. Working with Abhijit Banerjee, the Ford International Professor of Economics at MIT, and Nava Ashraf at Harvard Business School, Hussam embarked on a project to understand how religious sense informs microcredit savings decisions amongst the poor in Bangladesh.

But she quickly found the topic difficult to study: There were many other factors at play in this type of economic decision-making, not least of which was gender roles within a household. Hussam found that while microloans are often marketed to women, their husbands routinely handle the funds. Studying money-saving behavior was nearly impossible when it was unclear whose behavior was being studied — the borrower’s, or her husband’s.

“There is so much valuable work to be done in women’s financial and social empowerment, but how do we capture the right outcomes?” Hussam says. “Maybe there are more measurable, tangible, or direct ways to improve the well-being of these individuals.”

Among the many factors that affect economic decision-making is health. Hussam quickly realized that a key means to self-empowerment is empowerment in health and hygiene — where women, particularly mothers, often play a significant role.

“When you’re sick, that becomes your entire focus,” she says. “Repeated, preventable illnesses — with which the developing world is too familiar — have huge, long-term physical and cognitive consequences. Education, labor, and financial security suffer — all of which are channels to self-determination and empowerment.”

Hussam is no stranger to the health concerns of the rural poor in Bangladesh; her father, a chemist, designs inexpensive arsenic filters that are sent to the country to provide people with safe drinking water. But despite the availability of such filters and other sanitation technology, child and infant mortality, by preventable bacterial and viral contamination, remain high. So she turned her research focus to a very simple, but far-reaching, hygiene behavior: handwashing with soap. It is, Hussam says, a low-cost, high-return activity that can vastly improve quality of life and equip people with the health stability to focus on other activities, such as education or building up financial savings.

Setting up the study

She began working with MIT’s Abdul Latif Jameel Poverty Action Lab (J-PAL) and a public health organization in the Indian state of West Bengal to design a way to study the barriers that discourage many Bengalis from taking up handwashing with soap.

“Every home has soap, and everyone knows that handwashing with soap is important, yet hardly anyone does it,” Hussam says. “Existing public health campaigns don’t ask why. If we want to see progress on these simple but valuable preventable health activities, we need to understand the behavioral reasons for why people aren’t taking up [healthy habits].”

Hussam designed a study to find out what would help transform handwashing into a habit in West Bengal. Working with the MIT Media Lab, she designed a soap dispenser with a simple sensor that can log when and how often the dispenser is used. Starting this August, Hussam will give soap to 3,000 households in West Bengal, 1,400 of which will receive the sensor-equipped dispensers.

Among the 1,400 households using the sensing dispenser, some will be told that someone will be monitoring their handwashing and reporting behavior to the household; others will be given incentives to wash their hands; and still others will be reminded to wash by an alarm clock set for dinnertime. After three months, all incentives, monitoring, and reminders will officially stop, but the dispensers will still log activity.

Hussam will continue to track handwashing in the households for a year. She hopes to discover what type of encouragement works best to inspire habitual handwashing, ensuring that it continues once external interventions are gone. Her eventual findings, she believes, will inform evidence-based policy that is tailored to human behavior, and therefore more likely to effect change on a large-scale.

This year, she wraps up her PhD at MIT; she then plans to join Yale University as a postdoc. There, she will continue her handwashing study through J-PAL’s sister lab, Innovations for Poverty Action.

Hussam intends to pursue development economics research in academia, with the intent of working in a field where her research will be policy-relevant, never just theoretical. And she hasn’t lost sight of her initial interest in the social norms that impact women’s empowerment in developing nations.

“All of these aspects of welfare are completely intertwined,” she says. “I have a feeling I’ll be coming full circle eventually.”