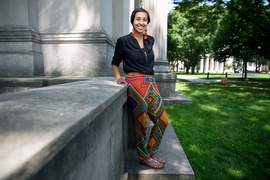 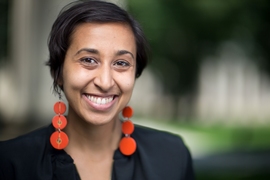 As MIT graduate student Mitali Thakor speaks about her research in a Cambridge coffee shop, an AMBER Alert from Abington, Massachusetts, lights up her iPhone, interrupting her midsentence as she describes her studies of anti-trafficking efforts in the digital age.

“You see this?” she says, holding up the alert on her phone. “This is exactly what I was talking about. We live in an age now where efforts to police things like potential trafficking of children can affect a huge population immediately. That’s a product of technology.”

Since 2013, AMBER Alerts — broadcast on television and radio since 1996 — have also been sent automatically to every mobile phone number in the United States. As a doctoral student in MIT’s Program in History, Anthropology, and Science, Technology, and Society (HASTS), Thakor is in tune with the pulse of technology and how it affects our lives — in particular, how it affects sex work and sex trafficking.

Thakor, who majored in feminist studies and anthropology as an undergraduate at Stanford University, was initially interested in how sex workers themselves utilize emerging technologies. But over time, her focus has shifted to the opposite end of the spectrum: how sex work and trafficking are policed using digital tools. Her research has now spanned three countries — the United States, the Netherlands, and Thailand.

She was initially drawn to the Netherlands by the work of an organization called Terre Des Hommes, which had designed a controversial, animated avatar called “Sweetie” to be used for online sting-like operations. “Sweetie,” a relatively lifelike representation of a 10-year-old Filipina girl, could be used to catch individuals soliciting webcam sex acts from children. Sting operations are legal in the U.S., but not in Europe.

“Using a digital agent for this effort kind of falls into a gray area [in Europe],” Thakor says. “Sweetie isn’t actually a real person, but is mostly realistic. The more lifelike an avatar is, the closer this method is to a traditional sting operation, and is that really legal?”

In the U.S. and many other countries, laws surrounding sex work and trafficking are far behind the technologies being used to promote those activities — so when it comes to policing, best practices can be hard to lay out. In the case of Sweetie, dispatching the avatar was controversial not only because it was so lifelike, but also because it came from a nongovernmental organization. Although Terre Des Hommes was technologically equipped to handle the job — they were able to effectively track down solicitors of child pornography using Sweetie — were they legally right to?

Thakor also ran into this question while working at Microsoft Research’s Human Trafficking Project in Cambridge, Massachusetts. There, she explored the use of social networks in catching sex trafficking — another highly technical approach not initially driven by law enforcement. Thakor is quick to point out that unbeknownst to the average user, Microsoft, Facebook, and many other tech companies have entire departments devoted to using facial-recognition software to scan the web for child abuse images, or child pornography.

If an illegal image or video is detected, before it’s removed, the companies use sophisticated algorithms to tag the image with a unique identifier that can be used to find and remove it again if it is ever redistributed. A similar system is used to find missing children. Using Facebook’s — and others’ — facial-recognition software, algorithms can scan online images for the children; Thakor notes that some children have, in fact, been located this way.

Bringing research into the classroom

However effective this approach to policing sex trafficking may be in the digital age, it remains unclear whether tech companies should be the ones doing the job. To balance her experiences with Microsoft and Terre Des Hommes, Thakor spent time living and working in Bangkok at a United Nations site where she could study her topic from a law-enforcement perspective. She says that while big organizations have the money, intellectual power, and legal framework to deal with the same issues that tech companies are tackling, they tend to also get stuck behind more red tape. Activist and legal aid organizations tend to have a more nuanced understanding of the historical context for deep-seated problems like sex trafficking, but tech companies are more likely to have the swift processing power to combat them; without working together, neither group entirely holds the answers.

Earlier this year, Thakor, who ultimately aims for a career in academia, taught her first anthropology and gender studies class, called “Human Trafficking and Modern-Day Slavery.” For 19 MIT undergraduates, she built a curriculum around some of the very tensions in her research: Rather than only requiring reading from experts in the field, she also asked students to read prose and poetry from non-experts, and to look at art that engaged the topics of sex work, trafficking, and policing in the digital age.

The emphasis on balancing the views of experts and non-experts in her field harkens back to some of Thakor’s earliest interests as a child. She grew up consuming science fiction movies and books, and reading postcolonial and feminist young adult novels, many of which touch on power dynamics similar to the ones at play in her current work.

“Research drives policy, and policy, usually, drives change,” Thakor says. “But it’s important to know that groups not involved in policy can actually be quite well-versed in the same social problems that law-enforcers are trying to tackle.”