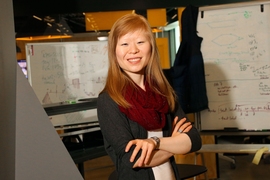 When MIT senior Emma Nelson was teaching engineering classes in China in 2013, a male student remarked of her as an instructor, “I thought we were supposed to meet engineers, not women.” As she stared out at the 100 college students before her, Nelson noticed there was just one female face looking back at her.

Nelson, who was there as a mechanical engineering major participating in MIT’s China Educational Technology Initiative (CETI), was face to face with the sobering reality of what her life might have been like: She lived in an orphanage in her native China until age 6, when a family from Chicago adopted her, opening up a path where being female wasn’t considered an impediment to pursuing a successful career as a scientist or engineer.

Nelson believes that in a country where families are permitted only one child, she was given up for adoption simply because of her gender. But in her new home, in a multicultural suburb of Chicago, she came to feel included and supported by her family and peers, and is now full steam ahead as a mechanical engineer focused on stymieing environmental degradation.

Nelson’s niche within her field is threefold: She wants to work on energy applications, but in the context of buildings or other tangible projects, using the lens of computer science. If this sounds like a jumble of interests, that’s because it is — each aspect of her ideal career can be directly traced back to one of the three research experiences she’s had as an undergraduate.

“I chose mechanical engineering because my favorite subjects were always physics and math,” Nelson says. “But it’s also one of the best degrees for people who don’t know exactly what niche they fit into yet, and that’s definitely where I fell.”

Her first research experience was in the Rohsenow Kendall Heat Transfer Laboratory, where she worked to produce silicon wafers for solar cells — which make up solar panels — in a way that created less waste than the method currently used in industry. Wafers are traditionally cut from a block of silicon using a thin blade, which can cause tiny particles to splinter off; this so-called volumetric waste may seem inconsequential, but it adds up.

Nelson and her colleagues tested a method of electroplating the silicon to coat the material before slicing off wafers; the technique acts somewhat like an adhesive to keep small particles from falling off. The research was only moderately successful — the electroplating wasn’t as adhesive as they’d hoped — but Nelson says the experience still provided her with an early realization about her interests.

“It was a good introduction for me to see how research is done, and how it could eventually integrate into society,” Nelson says. “The thing that I love best about research is watching theory and equations come to life, and seeing eventually that you can make something tangible from them.”

Although it was a good introduction to research, that work wasn’t entirely in line with Nelson’s interests, so after a semester, she moved on to the Experimental Hydrodynamics Laboratory, where she conducted research on a macroscopic scale. She studied wave motions — literal waves, in bodies of water — to optimize the design of buildings to withstand disasters such as dam breakages. She also studied how waves of certain heights could be used to harness tidal energy.

“I liked this experience because I could actually see the waves,” Nelson says. “With electroplating, you can say the electrons are moving a certain way, but I don’t get to see it; it’s just a black box to me.”

The experience cemented Nelson’s interest in work that she could actually see in front of her. This year, she’s focusing most of her time on the senior capstone courses 2.013 (Engineering Systems Design) and 2.014 (Engineering Systems Development), where she’s part of a team that’s building an energy source for an unmanned aerial vehicle to land on for recharging in the middle of the ocean.

Nelson’s role is to design the control system, for which she had to learn to hack into a charger, desolder it, rewire it, and connect it back to her controls to allow the charger to run autonomously. It’s an experience that’s been more hands-on than any she’d previously had — and with her largely theory-based background, Nelson says this year has presented a tremendous learning curve.

In addition to her experience teaching in China, Nelson also participated in an MIT International Science and Technology Initiatives (MISTI) program in Israel this winter, where she worked at an ecological greenhouse. She learned how to manage water — in a nation that’s famously low on fresh resources — through an aquaponics system, which uses marine life to cultivate plant growth.

“I feel like by seeing how other people live, I understand better what it means to be human, or even just American,” Nelson says of her two international work experiences.

But of these two experiences, China was vastly more personal. Nelson held a lot of resentment toward the country for much of her childhood. However, between her first return to China in 2008 and her visit through CETI in 2013, she was able not only to tackle some of her resentment and cultural disconnects, but also to find career motivation.

“It reaffirmed my goal to work in the energy field, because I saw how bad the pollution was, and I want to tackle that problem,” Nelson says.

During her junior year, Nelson joined MIT’s Asian Dance Team, where she’s been learning traditional Chinese dance as an outlet for physical activity between heavy coursework and research.

Next year, Nelson will continue at MIT as part of a two-year master’s program in building technology. Under Leon Glicksman, a professor of building technology and mechanical engineering, she will focus on renovations to make buildings in Portugal passively energy-efficient. It’s a project that combines the three pillars of academic interest she landed on during her undergraduate research.

The memory of her humble beginnings always keeps Nelson going: “I just sometimes look at my life and think how many things had to line up for me to get here,” she says. “I feel it would be insulting to my luck and all the people who have helped me along my journey to ever give up.”