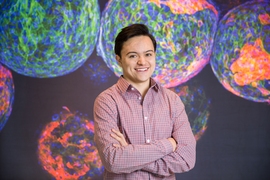 ↓ Download Image
Caption: “I think that type of experience where you can conduct real, top-notch research with some of the best professors, post-doctoral students and graduate students in the world is something that's quite unique to MIT,” senior Camilo Ruiz says.
Credits: Photo: Casey Atkins

Caption:
“I think that type of experience where you can conduct real, top-notch research with some of the best professors, post-doctoral students and graduate students in the world is something that's quite unique to MIT,” senior Camilo Ruiz says.
Credits:
Photo: Casey Atkins

Camilo Ruiz was only four when his parents moved from Colombia to the United States, and though he doesn’t remember the move, his bicultural upbringing and his close ties to Colombia have shaped how he views his role in the world.

“I'm a very impact-driven person,” explains Ruiz, a senior biological engineering major. “Over my life, I seek to contribute to society in a way that scales across people and across time.”

Engineering with a shared goal

During his time at MIT, Ruiz has sought out collaborative research projects with real-world impacts. At the DNA Medicine Institute, a small biotechnology startup in Cambridge, Massachusetts, he helped develop a handheld blood diagnostic device.

“Effectively you can take a whole room’s worth of hospital equipment and shrink it down into a device that fits in the palm of your hand,” Ruiz says.

The device, which won the Nokia XChallenge Competition, uses 1,500 times less blood than a standard blood test and may allow patients to test their own blood at home. Ruiz and his five team members each had a different area of expertise, and he says he was inspired by the way everyone worked together toward a common goal of improving health care.

Ruiz has also conducted research with Robert Langer, the David H. Koch Institute Professor at MIT and a member of the Koch Institute, whose lab developed the CellSqueeze, a device that allows researchers to put almost any molecule inside a cell, including DNA, RNA, or protein.

“Cells are self-contained compartments with the conditions necessary for life, so they’re picky about what they let in,” says Ruiz. “Yet as engineers, we must breach that barrier to harness cells as substrates to solve problems.”

As part of the Langer Lab, Ruiz tried to figure out how to use the device to target cells of specific sizes in human blood. Some cancer patients have large tumor cells circulating in their blood, so if the device can selectively mark and isolate those cells, it could help monitor a patient’s tumor without the need for a physical biopsy and provide insights into how cancers progress. Ruiz also worked on using the device to deliver different molecules to T-cells, the cells that regulate the immune system. If the right molecules are delivered to T-cells, the immune system will ramp up a response to defend against cancer or another disease.

A deep sense of obligation

Ruiz’s family had lived in Colombia for many generations, but during the early 1990s his parents became concerned about escalating violence close to home and decided to leave their extended family and move to the United States.

“It was a difficult decision to move,” says Ruiz. “But my parents made that sacrifice so that my brother and I could have a safer place to grow up and better educational opportunities.”

Ruiz visits his family in Colombia as often as he can, at least once a year, and his trips back have profoundly influenced him. He recalls one Christmas vacation during high school when he volunteered at an orphanage with his grandmother and met kids his own age with much less fortunate circumstances.

“I saw a stark contrast and a chasm in opportunity that I lived every day,” explains Ruiz. “Because of that I feel a deep sense of obligation to generate the most social impact I can over my career.”

As a high school student in Katy, Texas, Ruiz was drawn to science courses, where his teachers encouraged him to ask questions and start dialogues about topics that interested him. The summer before his senior year, he participated in E2, a week-long engineering program at MIT. His group worked on building a suite of low-cost health care devices, and the program, which allowed Ruiz to experience the power of team-based, applied research, put MIT on his radar.

“At E2, I discovered the intensive, collaborative culture and scientific powerhouse that characterizes MIT,” he says.

Ruiz found an effective mentor in Armon Sharei, a postdoc in the Langer Lab. Sharei helped Ruiz troubleshoot his projects and taught him the power of reaching out to other researchers and creating a strong collaborative network. He also encouraged Ruiz to stay focused on his long-term research goals, which made it easier to overcome the smaller obstacles he encountered along the way.

“I think that type of experience where you can conduct real, top-notch research with some of the best professors, postdoctoral students and graduate students in the world is something that's quite unique to MIT,” says Ruiz.

During his time at MIT, Ruiz has developed a strong foundation in a number of other fields, including computer science, electrical engineering, and mechanical engineering. In the process, he has developed an interdisciplinary perspective that allows him to look at problems from many different angles and generate solutions that work in the real world.

Ruiz is currently managing a 22-person team for his capstone mechanical engineering project. The team is developing an automatic bathroom stall door, which is much more hygienic than doors that have to be manually opened and closed. Ruiz says he has particularly enjoyed his foray into mechanical engineering because it is possible to turn an idea into a real product in a much shorter timeframe than can be accomplished in biological engineering.

Ruiz’s strong community of close-knit friends at MIT is a constant source of support, and he also credits his parents with helping him stay balanced.

“My parents have been a huge influence,” says Ruiz. “They’ve given me great opportunities and a cultural heritage which influences how I see my life in the U.S.”

After graduating this May, Ruiz plans to continue working on applied biotechnologies, either in graduate school or in industry. In the meantime, he is making the most of every moment at MIT.

“Even the weeks where it's insane and there's a workload way beyond anything you'd expect, I chuckle a bit and think to myself this is what I'm here for,” he says.