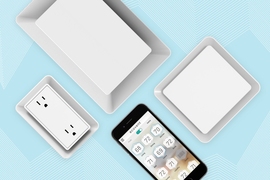 ↓ Download Image
Caption: Ecovent’s system is centered on smart vents (rectangular component) that homeowners install in place of traditional vents. They plug one sensor (plug adapter, at left) into each room, place a control hub (square component) anywhere in the house, and input the desired temperatures for each room into a smartphone app.
Credits: Courtesy of Ecovent

Caption:
Ecovent’s system is centered on smart vents (rectangular component) that homeowners install in place of traditional vents. They plug one sensor (plug adapter, at left) into each room, place a control hub (square component) anywhere in the house, and input the desired temperatures for each room into a smartphone app.
Credits:
Courtesy of Ecovent

Smart temperature-control devices — such as thermostats that learn and adjust to pre-programmed temperatures — are poised to increase comfort and save energy in homes.

Now MIT spinout Ecovent is further refining this technology with an automated system of vents and sensors that allows temperature control of individual rooms through an app — and which has surprising connections to missile-defense technology.

Ecovent’s system is centered on smart vents that homeowners install in place of traditional vents. They then plug one sensor into each room, place a control hub anywhere in the house, and input the desired temperatures for each room into a smartphone app. The sensors constantly measure a room’s temperature, and relay that information to the hub, which tells the vents how much to open or close. The system also learns behavior, so it eventually adjusts to the users’ preferences.

A system for a four-bedroom home — with a current cost of around $2,100 — can be installed in any of the 74 million U.S. households currently using central heating, ventilating, and air conditioning (HVAC) systems. Ecovent will begin shipping their $1.2 million in preorders in the next few weeks.

“Companies today are focused on more efficiency in cars, phones, and electronics,” Patel says. “But you look at a house and it’s [inefficient] from the ground up.”

Homes with Ecovent systems, Patel estimates, could save roughly 10 to 15 percent on their utility bills. Over the next year, the company plans to put its systems “through the ringer,” he says, to nail down the exact percentage.

By turning a home traditionally controlled by only one temperature gauge — the thermostat — into a distributed sensor network, Ecovent is trying to change “the backbone of the home,” Patel adds.

But Ecovent’s system factors in all variables that impact temperatures even minutely, in fractions of a second, and adjusts accordingly. The sensors can detect, for instance, heat from sun shining into rooms, or from cooking. The system will also calibrate if sensors are plugged into areas that could affect readings, such as behind furniture or near windows.

The system’s robust design is due, in large part, to the co-founders’ backgrounds in missile defense, Patel says — which involved creating algorithms to make sense of tons of raw data quickly. At Lockheed, Patel worked on phased array radars used to locate and intercept incoming missiles on the battlefield or in space; Lancaster, now key developer for Ecovent’s algorithms, designed the intercepting missiles.

While it may sound strange, Patel says, the programming feats used for missile defense share remarkable similarities with those used to for Ecovent’s plug-in sensors: Both jobs require detecting signatures, patterns, and anomalies — just in different sets of data.

“With both, you’re using very curated sets of sensors and putting them in a highly unknown environment,” Patel says. “In the military space, your enemy is trying to confuse you, so the technology has to be very robust. By virtue of how people are, the home is very confusing: We seldom have schedules or patterns. You need to develop robust systems to understand those variables too.”

Patel came to the MIT Sloan School of Management in 2012 specifically to develop and commercialize smart vents. He’d come up with the idea after trying to save money in his New Jersey home by shutting off some air vents. When his mother visited, he once forgot to open the vents again, and she froze all night without sleep.

Within a few months at MIT Sloan, Patel’s business had taking shape. “Everything that seemed impossible suddenly seemed reachable,” he says. “There’s something special that happens at MIT — it’s a game-changer.”

In one of his first classes, Patel met Kelman, an enthusiastic entrepreneur who fleshed out Ecovent’s business plan and strategy.

In January 2013, Patel brought the business idea to StartIAP, a startup accelerator held over MIT’s winter break. This led Rose — Patel’s old friend from college — to fly from Philadelphia to help design a prototype.

By the end of StartIAP, Rose and Patel had designed four small vents, controlled by a basic Web app, that opened or closed to maintain temperatures in each room of a four-room dollhouse. This prototype later earned Patel and Kelman a $1,000 prize from the 2013 $100K Pitch Contest.

Throughout his two years at MIT Sloan, Patel says he received mentorship from MIT’s Venture Mentoring Service, endless support from classmates, and “took every startup class under the sun.”

A particularly memorable lesson in marketing came from an entrepreneurship class taught by senior lecturer Paul English, co-founder and former chief technology officer of the travel search engine KAYAK. While he had initially marketed Ecovent as a money-saver, Patel soon realized, through English’s lectures on value proposition, that its real worth was in personal comfort.

“It was so jarring,” Patel says. “The pain point of paying the air conditioning bill is small. What [English] taught me was the comfort in the house is what sucks. Ecovent would make that suck less.”

In the future, Patel sees the Ecovent system as a potential diagnostic tool for homeowners to identify and fix issues with existing HVAC systems.

In fact, Patel says, Ecovent found critical faults in three test homes. In one, he says, the system measured the temperature coming out of one duct as being dangerously high — close to 185 degrees Fahrenheit. Because the vents were in the ceiling, the homeowner never knew.

It was later discovered that the furnace was overheating and near cracking, which could have cost thousands to repair and potentially leaked deadly carbon monoxide into the house. “We’ve shown we have the science to make systematic improvements in the house as we go forward,” Patel says.