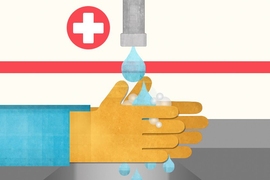 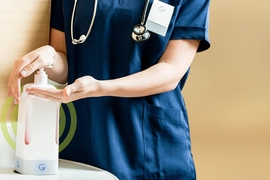 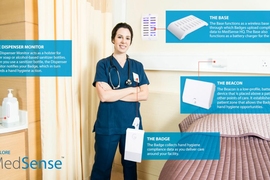 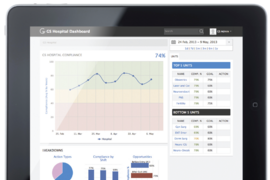 ↓ Download Image
Caption: An example of what a user may see on the MedSense HQ website. Compliance rates are listed as percentages by shifts and units. A graph displays compliance averages by the week.
Credits: Courtesy of General Sensing

Caption:
The MedSense system includes a smart badge, beacons, dispenser monitors, and a base station.
Credits:
Courtesy of General Sensing

Caption:
An example of what a user may see on the MedSense HQ website. Compliance rates are listed as percentages by shifts and units. A graph displays compliance averages by the week.
Credits:
Courtesy of General Sensing

The World Health Organization (WHO) cites good hand hygiene as a major factor in stopping the spread of hospital-acquired infections (HAIs) caused by exposure to various bacteria.

But it’s been difficult to track workers’ compliance with these guidelines. Administrators usually just spend a few days a month monitoring health care workers, noting hand-hygiene habits on a WHO checklist.

Now General Sensing — co-founded by MIT Media Lab alumni Jonathan Gips SM ’06 and Philip Liang SM ’06 — is using smart devices to monitor hand hygiene among hospital staff and ensure compliance with WHO guidelines. The aim, Liang says, is to help reduce the spread of HAIs, which affected one in 25 U.S. hospital patients in 2010, according to the Centers for Disease Control and Prevention.

Called MedSense Clear, the system revolves around a badge worn by hospital staff. The badge can tell when a worker comes near or leaves a patient’s side, and whether that worker has used an alcohol-based sanitizer or soap dispenser during those times. It also vibrates to remind workers to wash up. The badge then sends data to a base station that pushes the data to a Web page where individuals can monitor their hand-washing, and administrators can see data about overall hand-hygiene compliance among staff.

A 2014 study in the Journal of Infection and Public Health concluded that compliance with WHO hand-washing rules jumped 25 percent in one month when staff used MedSense in a 16-bed hospital unit at Salmaniya Medical Complex in Bahrain. Currently, the Royal Brompton and Harefield hospital in London is studying the correlation between the MedSense system and reduction in HAIs.

The startup is also now developing a system to monitor hospital workflow, with aims of pinpointing areas where time and resources may be wasted by unnecessary wait times for patients. “We’re trying to drive safety with hand hygiene, and drive efficiency by reducing waste,” Gips says. “Really, we’re trying to be a support system for the hospital.”

In the “patient zone”

MedSense consists of four smart devices, including the badge, that communicate with each other. Beacons installed near patients are tuned to cover small or large areas, creating a “patient zone.”

The badge knows if the wearer has washed his or her hands, because the system’s soap dispensers are designed to sense pressure when their nozzles are pressed down. If the wearer uses the dispenser, the holder sends that information to the smart badge.

When a badge-wearer enters a patient zone and has not performed hand hygiene, the badge vibrates to remind the wearer to wash up, and does so again when the wearer leaves the zone.

“We think it’s important that the system provides feedback when it’s actionable without getting in the way of delivering care,” Gips says.

The system’s final component is a base station, set up near nursing stations. When workers are within 50 feet of the station, the station routes the badge’s data over the network to an online dashboard, called MedSense HQ. These stations also have 16 charging slots for the badge’s flat batteries.

In MedSense HQ, individuals can track, for instance, what times they missed washing their hands, or what times of the day they’re better at hand hygiene. Administrators can see aggregated data indicating, for instance, which units are more or less compliant with hand-hygiene protocols.

What’s interesting, Liang says, is that when it’s used in tandem with visual observation, MedSense consistently shows that hand hygiene increases to about 90 percent as staff know they’re being watched by administrators, a phenomenon called the Hawthorne Effect.

“We’ll look at the data and can pinpoint when the wearer is being watched. You’ll see the data spike and then go back down when [the observer] leaves,” he says.

MedSense, on the other hand, removes that observer bias, he says, and can collect data around the clock.

In the Media Laboratory class MAS 834 (Tangible Interfaces), Liang, Gips, and Noah Paessel SM ’05 created dog collars equipped with RFID technology and accelerometers. These tracked a dog’s movement, communicated with smart collars worn by other dogs, and pushed that data online. Owners could log on to a social media site to check their pets’ exercise levels, interactions, and compare stats with other pets.

“It was a bit tongue-in-cheek,” Gips admits. But the students soon found themselves presenting a prototype to hundreds at human-computer interaction conference in Portland, Oregon — where it garnered significant attention.

When a researcher requested the technology to monitor health care staff, however, the startup decided to get a clean start in the health care industry, “which they say is recession-proof,” Gips says.

And after learning about WHO’s hand-hygiene guidelines, the team developed MedSense as an automated way to help administrators monitor hand-washing among staff. In 2011, researchers at Queen Mary Hospital in Hong Kong published a paper in the journal BioMed Infectious Disease that found MedSense was 88 percent accurate in monitoring staff compliance with the WHO’s guidelines.

Only then did the startup decide to commercialize this system. “We’re from MIT: We like publishing,” Gips says. “We needed to know we had something accurate.”

Since then, General Sensing has raised more than $15 million in capital, and MedSense has been trialed in 10 hospitals across the United States and Europe, and in Saudi Arabia, Bahrain, and Qatar.

But the data MedSense collects on time spent near and around patients has proven to have another use: monitoring workflow.

As part of MedSense Look, the startup is developing small RFID tags that patients and staff wear, and ceiling-mounted transponders to track the tags, in real-time, as the wearers move through the “patient journey” — the waiting room, pre-procedure, procedure, and recovery room. General Sensing creates digital floor maps of an area being studied; patients and staff show up on the floor map as color-coded dots.

This allows the startup to gather data on patient wait times, treatment patterns, and other things that may reveal wasted time and resources. "Changing even seemingly simple workflows can require buy-in from a lot people. It helps to have quantifiable proof of the problem,” Gips says.

Another possible application is real-time location of surplus staff — particularly important when there’s a sudden influx of patients in one area of a hospital, Gips says. “Today, you have to call different units to see who has extra people on staff,” he explains. “With our system, we’re hoping you can log in and see where there are extra people that can come help. That waste can turn into a critical safety measure.”

An end to drug errors?

The Internet of medical things