An end to drug errors? 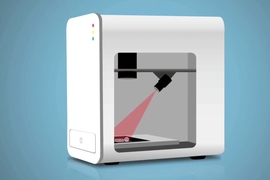 MIT alumni entrepreneurs Gauti Reynisson MBA ’10 and Ívar Helgason HS ’08 spent the early 2000s working for companies that implemented medication-safety technologies — such as electronic-prescription and pill-barcoding systems — at hospitals in their native Iceland and other European countries.

But all that time spent in hospitals soon opened their eyes to a major health care issue: Surprisingly often, patients receive the wrong medications. Indeed, a 2006 report from the Institute of Medicine found that 1.5 million hospitalized patients in the United States experience medication errors every year due, in part, to drug-administration mistakes. Some cases have adverse or fatal results.

Frustrated and seeking a solution, the Icelandic duo quit their careers and traveled to MIT for inspiration. There, they teamed up with María Rúnarsdóttir MBA ’08 and devised MedEye, a bedside medication-scanning system that uses computer vision to identify pills and check them against medication records, to ensure that a patient gets the right drug and dosage.

Commercialized through startup Mint Solutions, MedEye has now been used for a year in hospitals in the Netherlands (where the startup is based), garnering significant attention from the medical community. Through this Dutch use, the co-founders have determined that roughly 10 percent of MedEye’s scans catch medication errors.

“Medication verification is a pinnacle point of medical safety,” says Helgason, a physician and product developer. “It’s a complicated chain of events that leads up to medication mistakes. But the bedside is the last possible place to stop these mistakes.”

Mint Solutions’ aim, Reynisson says, is to aid nurses in rapidly, efficiently, and correctly administering medication. “We want the device to be the nurse’s best friend,” says Reynisson, now Mint’s CEO. The device, he adds, could yield savings by averting medication mishaps, which can cost hundreds of millions of dollars.

Currently, the startup has raised $6 million in funding, and is ramping up production and working with a Dutch health care insurance company to bring the MedEye to 15 hospitals across the country, as well as Belgium, the United Kingdom, and Germany.

To use the MedEye — a foot-high box in a white housing — a nurse first scans a patient’s wristband, which has a barcode that accesses the patient’s electronic records. The nurse then pushes the assigned pills into the MedEye via a sliding tray. Inside the device, a small camera scans the pills, rapidly identifying them by size, shape, color, and markings. Algorithms distinguish the pills by matching them against a database of nearly all pills in circulation.

Although the hardware is impressive, much innovation is in MedEye’s software, which cross-references (and updates) the results in the patient’s records. Results are listed in a simple interface: Color-coded boxes show if pills have been correctly prescribed (green), or are unknown or wrong (red). If a pill isn’t in MedEye’s database — because it’s new, for instance — the system alerts the nurse, who adds the information into the software for next time.

“It does all the querying for the right medication, for the right patient, and takes care of the paperwork,” Helgason says. “We save a lot of time for nurses that way.”

Similar systems exist for catching medication errors: About 15 years ago, some hospitals began using barcode systems — which Reynisson and Helgason actually helped install in some Dutch and German hospitals. These systems also require nurses to use a handheld scanner to scan a patient’s wristband, and then the imprinted barcodes on each pill container.

“But the hurdle has been getting these installed,” Reynisson says. “Companies sell medications with barcodes, others sell software, or barcode scanners. Hospitals have to make all these things work together, and it’s hard for small and medium hospitals to afford. No one is selling turn-key  barcode systems.”

That’s where MedEye is truly unique, Helgason says: As an entire system that requires no change in a hospital’s workflow or logistics, “it’s more usable and more accessible in health care facilities.”

Feedback from nurses using MedEye to ease their workloads has been positive, Reynisson says. And errors are caught more often than expected. In fact, he recalls a memorable moment last year when a nurse at the Dutch hospital demonstrated the MedEye for department heads on a random patient. The nurse scanned four pills, which had been assigned to the patient, and added an extra, erroneous pill to show how MedEye caught errors.

“MedEye showed the extra pill was incorrect. But, to his surprise, so were two other pills that the nurse had assumed were correct, because another nurse had dispensed those,” Reynisson says. “Goes to show that even with full focus, it is common for nurses to be in a position where they are expected to catch errors made in other parts of the medication-delivery process.”

Helgason conceived of MedEye while studying in the MIT-Harvard Health Sciences and Technology program. In a computer-vision class in the Computer Science and Artificial Intelligence Laboratory, he saw that advances in 3-D object-recognition technology meant computers could learn objects based on various characteristics.

At the same time, he started taking heed of MIT’s burgeoning startup ecosystem, prompting him to contact his longtime medical-device colleague. “I remember Ívar called me one day and said, ‘Gauti, you have to come to MIT: Everyone’s starting companies,’” says Reynisson, a trained programmer who wrote early object-recognition code for the MedEye.

Seeking a change of pace from computer science, Reynisson enrolled in the MIT Sloan School of Management — where he saw that Helgason was right. “There was a spirit there, where you have to go for it, find a solution and market it, because if you don’t, no one else will,” he says. “That attitude, and seeing others do it, really inspires you to start a company and take the risk.”

“That’s when we started to think of a business beyond the technology,” Reynisson says. “We left with a fairly sizeable business plan to take to investors and get funding.”

The team felt unsure of the technology at first. But a 2010 demonstration at a Dutch hospital of an early prototype — a bulkier version of the MedEye, with off-the-shelf parts, constructed at MIT — changed their perception. The hospital had to identify about 250 small, white pills of different medications that, in fact, all looked the same.

“We tried them all in our prototype at once, and it worked,” Reynisson says. “That’s when we realized what a change it would be for a hospital to collect data and important safety information, and get it fast and efficiently, without asking the nurse to pick up a pen.”

Mint Solution now has 40 MedEye systems ready to deploy across Europe in the coming months, with hopes of gaining some client feedback. In the future, Reynisson says, the startup has its sights on developing additional medication-safety technologies.

“At the core of the startup is this belief that better information technology in hospitals can both increase efficiency and safety, and lead to better outcomes,” he says. “We’re starting with verification of medication. But who knows what’s next?”

The Internet of medical things