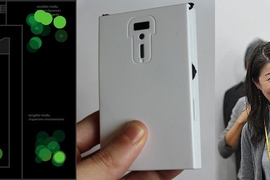 What if you could bring that type of analytics to the workplace? Now MIT spinout Sociometric Solutions is developing a system it calls “moneyball for business,” which uses sensor identification badges and analytics tools to track behavioral data on employees, providing insights that can increase productivity.

“‘Moneyball’ is putting numbers on behavior and using that data to build a baseball team. But what if I could say, ‘Here’s how you need to talk to customers, here’s how people need to collaborate with each other, and here are the things that lead to outcomes such as turnover, sales, and job satisfaction,’” says Ben Waber PhD ’11, co-founder and president of Sociometric. “Individuals can use that data to boost performance, and a company can use that to help set up an environment where everybody’s going to succeed.”

Sociometric’s system — based on years of MIT research — consists of employee identification badges with built-in Bluetooth sensors that track location and which way someone’s facing. Other sensors show when employees lean in — signaling, for instance, engagement in a conversation — and accelerometers can track their speed (sensing bursts of lethargy and vigor). A built-in microphone records how often, fast, and loud individuals talk, as well as tone of voice (but not actual conversation). Increased speed and higher voice tones, for example, are strong indicators of high stress levels.

Readers placed around an office collect the data and push it to the cloud. (Individuals have access to their personal data via a Web dashboard or smartphone, but companies are only given anonymous, aggregated results of patterns and trends in behavior.) By combining this information with employee-performance data from surveys, interviews, and objective performance metrics, Sociometric can pinpoint areas where management can build more productive offices — in ways as surprising as providing larger lunch tables or moving coffee stations to increase interaction.

In one of its earliest studies, with a Bank of America call center, for instance, Sociometric tracked co-workers for three months. They predicted that allowing certain employees to take breaks together — to let off steam or share tips about customer service — would improve productivity. Sure enough, when the bank instituted the changes, Sociometric measured a 15 to 20 percent bump in productivity, a 19 percent drop in stress levels, and decreased turnover, from 40 to 12 percent.

All things considered, Waber says, these and other solutions produce a 20 percent rise, on average, in productivity and employee satisfaction, and a similar decrease in turnover.

More than 20 retail, sales, and consulting firms have used Sociometric’s system. Additionally, more than 60 research organizations across the globe are using the system  on management, social psychology, medicine, computer science, and physical therapy, among other things.

Sociometric’s MIT co-founders, and co-inventors of its technology, include Alexander “Sandy” Pentland, the Toshiba Professor of Media Arts and Science, who serves as scientific advisor; Daniel Olguin Olguin SM ’07, PhD ’11, who is chief operating officer; and Taemie Kim PhD ’11, who is chief scientist.

Natural transition for a company

Sociometric traces its origins to 2007, when students in Pentland’s Human Dynamics Group, including Waber, were approached to use behavioral analytics for a management study.

Peter Gloor, a researcher in the Center for Collective Intelligence, was using surveys of employees at a German bank, where the marketing division was split into four teams located across 10 rooms on two floors. The bank wanted to know how this physical layout affected productivity and job satisfaction.

Waber, Pentland, and other researchers developed and deployed 22 prototypes of Sociometric badges at the bank for a month, registering when two wearers were talking to one another and for how long.

Accumulating more than 2,000 hours of data — and comparing that data with survey results — they predicted, with 60 percent accuracy, that close-knit groups of workers who spoke frequently with one another were more satisfied and got more work done more efficiently. They also found evidence of communication overload, where high volumes of email — due to lack of face-to-face interaction — were causing some employees difficulty in concentrating, and decreasing their job satisfaction.

Armed with these results, the bank rearranged its layout to increase the proximity of the close-knit employees, and dropped from four teams to three to encourage stronger interaction.

Seeing potential, Waber, Pentland, and others started trialing the system with the Media Lab’s various corporate sponsors. From these early experiences — and with some advice from MIT’s Venture Mentoring Service — the startup refined the system and learned how to pitch it to potential customers and deploy it efficiently. As word spread, companies started offering to pay.

“We thought, ‘If we could make an impact doing something so simple [as measuring face-to-face interactions], imagine what we could do with more sophisticated metrics,’” Waber says.

From there, Sociometric built out its analytics tools primarily through dozens of research collaborations. A study with Cornell University in 2013, for instance, allowed the startup to prove that it could accurately predict high levels of cortisol in someone’s saliva — an indicator of high stress — based on their tone of voice. “That suddenly became a metric we could use,” Waber says.

Over the years, Sociometric has had some surprising findings. Waber points to his firm’s work with a major online travel company. While looking at the employees’ lunchtime interactions, they discovered one of the most predictive measures of good performance was the number of people an employee ate with — the more, the merrier.

The idea is that these employees, Waber says, had been able to accumulate larger networks, knew what others were working on, and were more likely to reach out to specific people with questions and concerns. Surprisingly, after this finding went public, some technology firms began installing larger cafeteria tables, Waber says.

“It’s crazy that something as trivial as physical space, as the size of the lunch table, could affect productivity,” Waber says. “The CEO obviously wasn’t thinking about that, but those are the biggest drivers of how people communicate with one another.”

Waber says many of Sociometric’s results point to a need for more social interaction in the workplace. In sales, for instance, communication with colleagues has proven more predictive of sales outcomes than the ability to talk with customers, Waber says.

“If someone figures out a really good way to pitch to customers, you talk to them and learn how to make that pitch, which makes things more efficient,” he says. “Even if you’re competing on performance metrics, if you know each other well enough, you’ll share. That’s exactly what we see.”

Some major companies such as Google and Facebook, Waber says, are already promoting socializing by, for instance, building campuses, where all workers come to collaborate. “But the next step for Sociometric is to take everyone else to that same level of collaboration,” he says.

Tuning in to unconscious communication