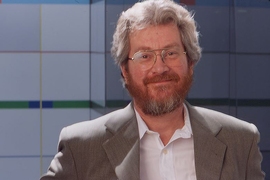 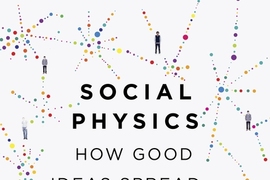 Caption:
Cover of “Social Physics: How Good Ideas Spread — The Lessons from a New Science"

Since 2001, the Human Dynamics Laboratory at the MIT Media Lab has used digital technologies — from home-brewed portable sensors to cellphone call records — to try to get a quantitative handle on the nature and the consequences of different types of human social interactions. The group’s focus has ranged from the very small, such as speed-dating sessions, to the very large, such as entire cities.

In a new book, “Social Physics: How Good Ideas Spread — The Lessons from a New Science,” Alex “Sandy” Pentland, the Toshiba Professor of Media Arts and Sciences and the director of the Human Dynamics Laboratory, draws all that research together into a new theory of human social interaction, which he then applies to questions of organizational management, urban planning, and digital privacy.

Pentland’s title appropriates the term that Auguste Comte, generally regarded as the father of sociology, initially applied to his own discipline. According to Pentland, the proliferation of mobile-sensor data in the Internet age, the advent of new mathematical tools for analyzing network interdependencies, and the power of modern computers mean that the aspiration to quantitative rigor in the term “social physics” is less far-fetched that it once was.

“We have enough data to take all of these theories about people and innovation and good decision-making and make them quantitative,” Pentland says. “And when you do that, you find that there are some reasonably simple principles that account for 80, 90 percent of the variance in some cases.”

As Pentland argues in the book, those principles have to do with the interplay of two distinct types of information propagation, which he calls “exploring” and “engagement.” Exploring represents exposure to novel ideas; engagement is the type of face-to-face social interaction in which nonverbal communication — the subject of Pentland’s first book, “Honest Signals” — still plays a crucial role.

According to “Social Physics,” however good an idea may look on paper — or on a computer screen — engagement is still the mechanism whereby it takes root in a community. “Adopting habits is a very conservative process that seems to be driven very largely by social learning, by seeing other people doing the same thing,” Pentland says. “Habits are things that sort of fire off automatically. You don’t want to get bad habits in your repertoire, because they’re real hard to get rid of. But when you’re exploring new ideas, you want to take everything you possibly can, because there’s really no cost to that.”

The importance of balancing exploration and engagement, Pentland says, is something that emerges again and again in his group’s research. One telling example, described in “Social Physics,” involves the stock-trading site eToro. Members of this site can choose to reveal their stock trades to each other, and any member may adopt — or in eToro parlance, “copy” — the trades of any other. Members receive financial rewards every time their trades are copied, creating an incentive for disclosure, but no one can tell whose trade anyone else is copying.

But eToro granted Pentland’s group access to the entire network of trades for 10 million transactions executed by 1.6 million eToro members. Some eToro members were loners: They almost never copied anyone else’s trades. Others — unbeknownst to themselves — were trapped in what Pentland calls echo chambers: They were densely connected to each other but rarely copied any outsiders’ trades. The MIT researchers found that eToro members whose networks allowed them to cull from a wide range of strategies earned a 30 percent better return on their investments than either the loners or the members trapped in echo chambers.

A similar dynamic, Pentland says, governed a bank, a military installation, an IT consultancy, and several other organizations that his group studied; in each case, creating opportunities for employees to interact face to face — by, say, synchronizing their break times — increased productivity. Remarkably, the same principle seems to apply to entire cities, where GDP turns out to be highly correlated with opportunities for face-to-face encounters.

One of the things Pentland’s lab is investigating is how to harness these effects. He and his students have, for instance, compared schemes for promoting changes in exercise or diet among groups of volunteers. In one scheme, volunteers receive a small financial reward if they meet particular goals; in another, they receive the same reward only if their peers meet the same goals. The difference between the success of the two schemes is not subtle, Pentland reports: The addition of peer pressure makes the program anywhere from twice to 16 times as successful.

Indeed, it was an elaboration of the same peer-based incentive scheme that enabled Pentland’s group to win a contest that the Defense Advanced Research Projects Agency sponsored in celebration of the Internet’s 40th anniversary, in which competitors used social media to identify the locations of 10 weather balloons placed randomly around the country.

“We’re not where economics is yet,” Pentland says. “That will take another 100 years. But we’re moving in some very promising directions.”

Professor Alex Pentland writes for The Chronicle of Higher Education about how researchers can produce important social insights by analyzing aggregated anonymous data. “Today the new technology of living labs is beginning to give researchers a more complete view of life in all its complexity. It is, I believe, the future of social science,” writes Pentland.

John Naughton includes research by Professors Eric Brynjolfsson and Sandy Pentland for this Guardian article on Big Data. Both Brynjolfsson and Pentland acknowledge that Big Data analytics provide a great deal of information about individuals and organizations.

Joshua Rothman writes for The New Yorker about Professor Alex "Sandy" Pentland’s book, Social Physics. “In fact, part of what makes the book so interesting is that Pentland has figured out how to capture, in numerical form, the intimate social vibrations of office life,” writes Rothman.

Randy Bean of The Wall Street Journal interviews Professor Alex “Sandy” Pentland on the transformational power of big data. “Scientists are discovering that we can begin to explain many things—financial crashes, revolutions, panics—that previously appeared to be random events,” says Pentland.

Why innovation thrives in cities