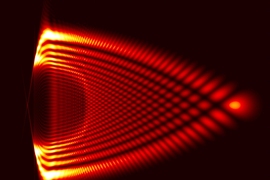 ↓ Download Image
Caption: This image shows the spatial distribution of charge for an accelerating wave packet, representing an electron, as calculated by this team’s approach. Brightest colors represent the highest charge levels. The self-acceleration of a particle predicted by this work is indistinguishable from acceleration that would be produced by a conventional electromagnetic field.
Credits: Courtesy of the researchers 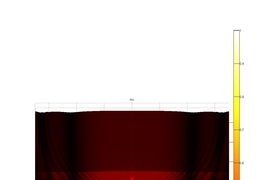 ↓ Download Image
Caption: This image shows the spatial distribution of charge for an accelerating wave packet, representing an electron, as calculated by this team’s approach. Brightest colors represent the highest charge levels. The self-acceleration of a particle predicted by this work is indistinguishable from acceleration that would be produced by a conventional electromagnetic field.
Credits: Courtesy of the researchers

Caption:
This image shows the spatial distribution of charge for an accelerating wave packet, representing an electron, as calculated by this team’s approach. Brightest colors represent the highest charge levels. The self-acceleration of a particle predicted by this work is indistinguishable from acceleration that would be produced by a conventional electromagnetic field.
Credits:
Courtesy of the researchers

Caption:
This image shows the spatial distribution of charge for an accelerating wave packet, representing an electron, as calculated by this team’s approach. Brightest colors represent the highest charge levels. The self-acceleration of a particle predicted by this work is indistinguishable from acceleration that would be produced by a conventional electromagnetic field.
Credits:
Courtesy of the researchers

Some physical principles have been considered immutable since the time of Isaac Newton: Light always travels in straight lines. No physical object can change its speed unless some outside force acts on it.

Not so fast, says a new generation of physicists: While the underlying physical laws haven’t changed, new ways of “tricking” those laws to permit seemingly impossible actions have begun to appear. For example, work that began in 2007 proved that under special conditions, light could be made to move along a curved trajectory — a finding that is already beginning to find some practical applications.

Now, in a new variation on the methods used to bend light, physicists at MIT and Israel’s Technion have found that subatomic particles can be induced to speed up all by themselves, almost to the speed of light, without the application of any external forces. The same underlying principle could also be used to extend the lifetime of some unstable isotopes, perhaps opening up new avenues of research in basic particle physics.

The findings, based on a theoretical analysis, were published in the journal Nature Physics by MIT postdoc Ido Kaminer and four colleagues at the Technion.

The new findings are based on a novel set of solutions for a set of basic quantum-physics principles called the Dirac equations; these describe the relativistic behavior of fundamental particles, such as electrons, in terms of a wave structure. (In quantum mechanics, waves and particles are considered to be two aspects of the same physical phenomena). By manipulating the wave structure, the team found, it should be possible to cause electrons to behave in unusual and counterintuitive ways.

This manipulation of waves could be accomplished using specially engineered phase masks — similar to those used to create holograms, but at a much smaller scale. Once created, the particles “self-accelerate,” the researchers say, in a way that is indistinguishable from how they would behave if propelled by an electromagnetic field.

“The electron is gaining speed, getting faster and faster,” Kaminer says. “It looks impossible. You don’t expect physics to allow this to happen.”

It turns out that this self-acceleration does not actually violate any physical laws — such as the conservation of momentum — because at the same time the particle is accelerating, it is also spreading out spatially in the opposite direction.

“The electron’s wave packet is not just accelerating, it’s also expanding,” Kaminer says, “so there is some part of it that compensates. It’s referred to as the tail of the wave packet, and it will go backward, so the total momentum will be conserved. There is another part of the wave packet that is paying the price for the main part’s acceleration.”

It turns out, according to further analysis, that this self-acceleration produces effects that are associated with relativity theory: It is a variation on the dilation of time and contraction of space, effects predicted by Albert Einstein to take place when objects move close to the speed of light. An example of this is Einstein’s famous twin paradox, in which a twin who travels at high speed in a rocket ages more slowly than another twin who remains on Earth.

In this case, the time dilation could be applied to subatomic particles that naturally decay and have very short lifetimes — causing these particles to last much longer than they ordinarily would.

This could make it easier to study such particles by causing them to stay around longer, Kaminer suggests. “Maybe you could measure effects in particle physics that you couldn’t do otherwise,” he says.

In addition, it might induce differences in the behavior of those particles that might reveal new, unexpected aspects of physics. “You could get different properties — not just for electrons, but for other particles as well,” Kaminer says.

Now that these effects have been predicted based on theoretical calculations, Kaminer says it should be possible to demonstrate the phenomenon in laboratory experiments. He is beginning work with MIT physics professor Marin Soljačić on the design of such experiments.

The experiments would make use of an electron microscope fitted with a specially designed phase mask that would produce 1,000 times higher resolution than those used for holography. “It’s the most exact way known today to affect the field of the electron,” Kaminer says.

While this is such early-stage work that it’s hard to predict what practical applications it might eventually have, Kaminer says this unusual way of accelerating electrons might prove to have practical uses, such as for medical imaging.

“Research on self-accelerating and shape-preserving beams became very active in recent years, with demonstration of different types of optical, plasmonic, and electron beams, and study of their propagation in different media,” says Ady Arie, a professor of electrical engineering at Tel Aviv University who was not involved in this research. “The authors derive shape-preserving solutions for the Dirac equation that describe the wave propagation of relativistic particles, which were not taken into account in most of the previous works.”

Arie adds, “Perhaps the most interesting result is the use of these particles to demonstrate the analog of the famous twin paradox of special relativity: The authors show that time dilation occurs between a self-accelerating particle that propagates along a curved trajectory and its ‘twin’ particle that remains at rest.”

In addition to Kaminer, who was the paper’s lead author, the research team included Jonathan Nemirovsky, Michael Rechtsman, Rivka Bekenstein, and Mordecai Segev, all of the Technion. The work was supported by the Israeli Center of Research Excellence, the U.S.-Israel Binational Science Foundation, and a Marie Curie grant from the European Commission.

A physicist and an inventor