A memorial built “with big hearts, and all love” 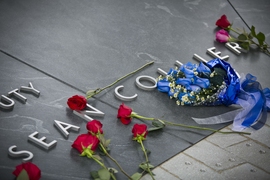 ↓ Download Image
Caption: Situated on the site where Officer Sean Collier was killed on April 18, 2013, the Collier Memorial is composed of 32 blocks of granite that form a five-way stone vault. The smooth, curved vault contains the inscription: “In the line of duty, Sean Collier, April 18, 2013.”
Credits: Photo: Dominick Reuter 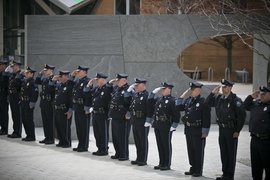 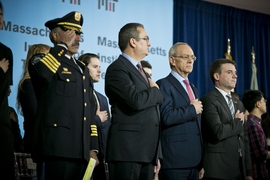 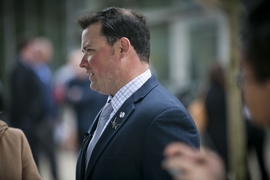 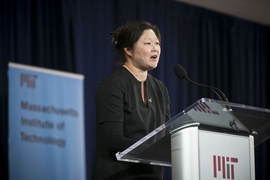 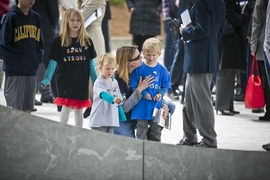 ↓ Download Image
Caption: Attendees gathered around and inside the newly opened Collier Memorial at the conclusion of today's ceremony.
Credits: Photo: Dominick Reuter 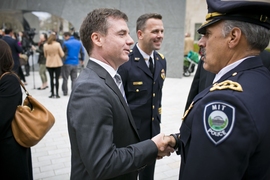 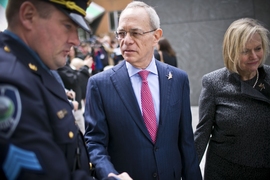 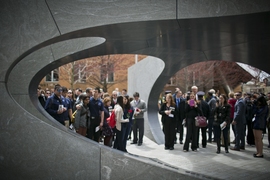 ↓ Download Image
Caption: The smooth, curved vault of the granite memorial is supported by five radial walls. Members of the MIT community gathered around and inside the structure following today's ceremony.
Credits: Photo: Dominick Reuter

Caption:
Officers salute moments before a convoy of four MIT Police cruisers pulled away from the Collier Memorial, symbolically opening it to the MIT community.
Credits:
Photo: Dominick Reuter

Caption:
Attendees gathered around and inside the newly opened Collier Memorial at the conclusion of today's ceremony.
Credits:
Photo: Dominick Reuter

Caption:
The smooth, curved vault of the granite memorial is supported by five radial walls. Members of the MIT community gathered around and inside the structure following today's ceremony.
Credits:
Photo: Dominick Reuter

Caption:
Situated on the site where Officer Sean Collier was killed on April 18, 2013, the Collier Memorial is composed of 32 blocks of granite that form a five-way stone vault. The smooth, curved vault contains the inscription: “In the line of duty, Sean Collier, April 18, 2013.”
Credits:
Photo: Dominick Reuter

Today, at the height of a brisk spring day, a permanent memorial was unveiled in tribute to MIT Police Officer Sean Collier, who was killed in the line of duty on April 18, 2013.

More than 3,000 people from the MIT community — along with hundreds of officers from MIT, the city of Cambridge, the Massachusetts State Police, and many surrounding campus and municipal police departments — joined members of Collier’s family to honor his memory with the commemoration of a thoughtfully conceived and precisely engineered monument, dedicated in the officer’s name.

The Collier Memorial — between the Stata Center and the Koch Institute for Integrative Cancer Research, alongside Vassar Street — stands as five massive half-arches that extend from a central keystone, like the fingers of an open hand. Each wall is built from blocks of solid, polished granite — 32 in all — pieced together in such a way that each block holds the others up, creating an interlocking, self-supporting edifice.

As the memorial’s architect, J. Meejin Yoon, professor and head of the Department of Architecture, noted at the ceremony, the process of constructing the memorial was “a deeply humbling experience.” The two-year process involved more than 100 people across campus, including members of the MIT Police, faculty, students, and staff, who worked “blizzard after blizzard … in a race against time to build a timeless structure.”

The result is a powerful new tribute to Collier, as well as a place of reflection for the MIT community, and a new gateway to the campus.

“We come together at the end of a long winter,” MIT President L. Rafael Reif told a crowd that filled a giant tent and spilled out onto MIT’s North Court. “But today, in the warmth of each other’s company, and through the bright memory of Sean’s example, I believe we have found spring at last.”

In welcoming the community to the memorial, Israel Ruiz, MIT’s executive vice president and treasurer, hoped the structure would provide “a sense of protection … a place where an open hand reminds us that we are a community that stays true to its values, and reaches out to those in need, as Officer Collier did, even in the face of the ultimate threat.”

John DiFava, MIT’s director of campus services and chief of police, recalled that in the days following Collier’s death, an impromptu memorial quickly sprang up at the site where the permanent memorial now stands. At the time, people brought stuffed animals, flowers, candles and pictures to the site, creating a collection of remembrances that seemed to provide “a sense of stability in uncertain times.”

“Now we have more,” DiFava said today. “So much more.”

The ceremony featured the premiere of a 10-minute video — produced for the Department of Architecture and titled “Strength Through Unity: The Making of the Collier Memorial at MIT” — which documents the structure’s conception and construction.

In its composition and its form, the memorial pays homage to Collier’s character. In considering materials, the Sean Collier Permanent Memorial Committee finally settled on granite — a nod to Collier’s love of hiking, and his many trips to New Hampshire’s granitic White Mountains with the MIT Outing Club.

The memorial’s five granite walls come together to create an open space, the shape of which is the precise form of an oblong stone from a cairn — a stone pile built along mountain trails to guide hikers — that was created in Collier’s honor by members of the MIT Outing Club. The two walls that are closest together align with the location where Collier’s police cruiser sat when he was fatally shot.

“It’s the most intimate space of the memorial,” Yoon noted.

As a subtle detail, the memorial’s pavement is inlaid with point lights, reflecting the positions of constellation and stars in the sky on the night of April 18, 2013, when Collier died.

“Resolved to build, block by block”

“There were many times when we had to keep our emotions in check because it was such an emotional project for everyone involved,” John Ochsendorf, the Class of 1942 Professor and an engineering consultant on the Collier Memorial, said in the video unveiled today.

This was especially true for one member of the team in particular: Rob Rogers, a project manager with construction manager Suffolk Construction, and Collier’s brother.

In her remarks today, Yoon recalled Rogers showing up at the site daily, “at the crack of dawn … resolved to build, block by block, the memorial for today’s commemoration.”

“It must have been incredibly hard to work every day so close to the site where Sean was killed,” Yoon said. “But Rob always had quiet strength, a kind spirit, and a contagious smile. And while no physical structure could truly represent the fullness of Sean’s life, and the meaning of his loss, for those of us who had the opportunity to learn about Sean from Rob … I can only say, it was truly an honor.”

“With big hearts, and all love”

The construction of the memorial was exacting, Yoon said, culminating a few weeks ago, on a “tense and cold day,” when 30 students, masons, and engineers “frantically checked scales and laptops” in anticipation of removing the scaffolding supporting the heavy keystone, and lowering it onto the granite walls below.

“It was the moment of truth,” Yoon said. But after eight nail-biting hours, once every granite piece had settled into place, the architect recalled being struck by a profound realization: “The memorial had really been built, not with granite blocks, but with big hearts, and all love.”

That sentiment is in reference to a passage from Rogers’ eulogy to Collier, which is inscribed on one of the structure’s walls: “Live long like he would. Big hearts, big smiles, big service, all love.”

“Today we celebrate a place of shelter”

The memorial ceremony included a presentation of the colors by the MIT Police Honor Guard, along with a performance of “Here We Are,” a poem written by Erica Funkhouser, an MIT lecturer in Comparative Media Studies/Writing, and students in her Advanced Poetry class. The poem’s closing line invites the community to explore the memorial:

“Two years ago, we were sheltering in place; today we celebrate a place of shelter. Take a look around. Open heart. Open mind. Open hand.”

As the ceremony drew to a close, a line of MIT Police cruisers that had surrounded the structure silently illuminated their blue lights and drove slowly off the site, officially opening the memorial to Collier’s family, friends, and community.

“Beginning today, this memorial will be a landmark in our daily lives, a new gateway to the campus we share,” Reif said. “I hope that in its graceful display of invisible physical forces, it can become a daily reminder of those invisible human forces that create community.”

Jim Braude of WGBH’s Greater Boston shares an excerpt of a documentary on the building of the new memorial honoring MIT Officer Sean Collier.

In an article for the Cambridge Chronicle, Sara Feijo writes about the new memorial MIT dedicated in honor of Officer Sean Collier. The memorial’s design was “inspired by the gesture of an open hand to reflect the notion of what it means to be ‘Collier Strong.’”

MIT has unveiled a new memorial to honor Officer Sean Collier, writes Jennifer Switzer for The Tech. “The permanent memorial is intended to be a place of remembrance and reflection, a place that evokes the strength of Collier Strong, a place that reflects the connectedness of our community,” said Executive Vice President Israel Ruiz.

On Wednesday, MIT dedicated a new “curving, star-shaped memorial” in honor of Officer Sean Collier, Steve Annear reports for The Boston Globe. The memorial’s architect, Prof. J. Meejin Yoon, explained that she designed the “memorial to not only look strong, but to have a position about that strength,” explains Yoon.

Joy Lim Nakrin of Fox 25 reports on the construction and dedication of the memorial built in honor of Officer Sean Collier. “When asked to design the memorial by the Collier Committee, I was both honored and very nervous and anxious. How could any physical structure truly commemorate this incredible life and service?” said Prof. J. Meejin Yoon, the memorial’s architect.

The Associated Press reports that MIT has dedicated a new memorial in honor of Officer Sean Collier. The memorial, “features five granite walls arranged in a radial pattern resembling the spread fingers of an open hand, connected by a vault in the center where ‘In the line of duty, Sean Collier April 18, 2013’ is etched.”

Bernice Corpuz reports for CBS Radio on the construction of a new memorial to honor Officer Sean Collier that was designed to embody the spirit of “Collier Strong.” Prof. J. Meejin Yoon explains that the memorial is made up of “32 unique, solid granite blocks working together to support each other to create an impossibly flat five-way vault.”

WHDH reporter Byron Barnett reports from MIT on the dedication of a new permanent memorial commemorating the life and legacy of Officer Sean Collier. Barnett reports that the monument is “an MIT engineering marvel: Five granite arches leaning in on each other, held in place by the laws of physics.”

WBUR reports on the dedication of a new permanent memorial at MIT created in honor of Officer Sean Collier. “Our goal was to show the best of MIT for Sean Collier. Hopefully he would look at it and say ‘Wow, that’s something really cool,’” explains Professor John Ochsendorf.

During a ceremony on Wednesday, MIT unveiled a new memorial built in honor of MIT Police Officer Sean Collier, reports Jack Harper for WCVB. “The goal was really to take that notion of what is strength and how to celebrate Sean,” said Prof. J. Meejin Yoon, the memorial's architect.

Work begins on the Collier Memorial