Work begins on the Collier Memorial 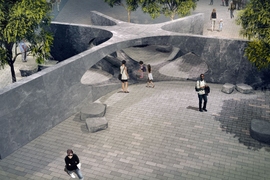 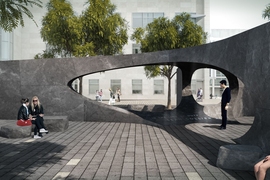 Even when he was young, Sean Collier knew he wanted to be a police officer — and when he joined the MIT Police force, he knew he was in the right place.

“Sean fit this community like a hand fits a glove,” says John DiFava, MIT’s director of facilities operations and security, and also the chief of the MIT Police. “Policing a college campus is different from what a state trooper might experience, because you see the same people over and over, day after day. You get to know the community, and the community knows you, so the connection is strong and personal. Even people who had spent only a little time with Sean were devastated by his death.”

On Monday, Oct. 13, a project team lead by the MIT Department of Facilities will begin to prepare a site for the installation of a permanent memorial to Officer Sean Collier, who was killed in active service to the MIT community in April 2013. The memorial was conceived and designed by J. Meejin Yoon, professor and head of the Department of Architecture at MIT, and is expected to be completed by April 2015.

Constructed like a complex puzzle around a central keystone, the Collier Memorial will comprise five archways in the shape of a protective yet open hand. As Yoon has designed it, the structure is built of solid granite to embody strength and encompasses a void at the center that evokes the absence of a large figure.

The memorial will stand at the intersection of Vassar and Main Streets, where there is now a small garden between the Stata Center and the David H. Koch Institute for Integrative Cancer Research. This site is very close to where Collier lost his life. While the structure’s open center creates a sheltered space for reflection and contemplation, the five “fingers” radiate outward and frame significant views, including a view of where Collier’s patrol car was parked.

Yoon’s formal brief about the memorial describes it as “a space of remembrance and reflection that honors Sean Collier and his service to the Institute. The memorial represents and translates ‘Collier Strong’ into a physical form of strength and connectedness.” Yoon explains that the shape of the open hand “is evocative of the aspirations of MIT, ‘mens et manus.’ In an age of unknowable threats, it is important to remember what kind of society we aspire to be: We choose an open hand over a closed fist.”

“Over the past few months,” says Yoon, “the concept has evolved, but its integrity has remained and has been reinforced throughout the design process. The memorial is one of those rare projects where everyone on the team is motivated to exceed expectations. We believe in the structure we are creating — and in its ability to translate the notion of strength through unity.”

After Yoon’s concept for the memorial was revealed last spring, the project team worked through the summer to fine-tune its design. The team is a multidisciplinary group that includes faculty; students; staff with expertise in policing, architecture, construction, engineering, and masonry; and consulting experts in structural and civil engineering, landscape architecture, and lighting design.

“This has become a very ‘MIT’ endeavor,” Yoon explains, “because developing and constructing the memorial requires a coming-together of like-minded, like-spirited people from many different disciplines to create something singular in the world.”

Class of 1942 Professor of Architecture and Engineering John Ochsendorf and his Masonry Research Group have been consulting with the project team on the memorial. Together with Yoon, Ochsendorf’s students developed an interactive tool that enables the design team to test various geometries and get real-time feedback to ensure that the structure’s load is distributed safely even as the form is adjusted due to site and design parameters.

“As a load-bearing granite structure, this memorial is unprecedented in scale and complexity,” explains Ochsendorf, who volunteers his time. “It involves the digital fabrication of the stones, complex structural engineering, and traditional crafts and trade skills upon installation, so it calls upon a wide range of proficiencies. Together, the stones will stand 11 feet tall and weigh 190 tons — and they will balance in equilibrium, relying on compression with minimal external assistance. It’s a world-class venture in terms of design and engineering.”

Yoon’s design for the Collier Memorial entails piecing together roughly 32 massive sections of solid granite, each weighing between 5,000 and 11,000 pounds and held in place primarily through weight and compression. The stones are being quarried in Virginia and shipped to Wisconsin, where they will be robotically carved into precise shapes.

“The memorial achieves its full strength and stability only when all of the pieces are in place,” says Yoon. “Each stone is a different size and shape of natural quarried block, and the pieces in the compression ring around the keystone have curvature in all three dimensions. We wanted to make sure the geometry was a result of bringing form and forces together — enabling the public to move through the structure as a threshold or gateway in remembrance of Sean’s service.”

Yoon and her collaborators are now in the process of determining the best method of installing the memorial’s stones; the current plan is to start with the keystone and build outward. Due to the scale and complexity of its components, the construction of the memorial will require weeks of time as well as extraordinary patience and precision.

From UROPs to PhDs, a range of students has been engaged in both design and structural research for the project. Student work includes conducting tests to confirm the relationship between overall form and specific details of the design relating to gravity loads as well as earthquake loads and other natural events.

“Our goal is to create something that will stand for centuries,” notes Ochsendorf. “The effort by Meejin and her team is a great example of how to put a diversity of research into practice to see what works. It’s been a huge undertaking by everyone from the designers and engineers to the fabricators and builders.”

“People think of design as a creative enterprise,” says Yoon, “but in this case, both the design and the engineering have made this an incredibly creative process, and I’m looking forward to the next phases.”

Beginning on Monday, Oct. 13, the team building the Collier Memorial will start installing a project fence around the site borders and relocating the existing plantings. Later this fall, the team will excavate the site and prepare the foundation. Walkways around the site will maintain pedestrian access to the North Court from the corner of Vassar and Main Streets.

MIT is working through the permitting process with the City of Cambridge, which has been supportive of the project from the start.

“It’s not just the police force and fire department, it’s the administrators and the community,” says DiFava. “The Collier Memorial will be magnificent, but it’s also more than what you’ll see. You have to know that there are many, many people working behind the scenes and that they have embraced this project with passion and dedication.”

Paul Murphy, senior project manager for the memorial, agrees wholeheartedly. “It is the best kind of project experience you could have,” he says, “where people proceed with such care and thought. Everyone brings such respect to the work — it’s moving, and it’s phenomenal. There’s a drive to do more, to go 10 steps beyond for Sean and make the process itself a kind of tribute.”

Questions about the construction work can be directed to Paul Murphy in the Department of Facilities.

View the membership of the Sean Collier Permanent Memorial Committee.

‘He loved us, and we loved him’