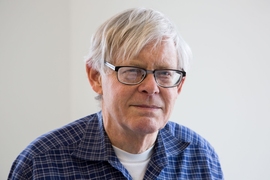 ↓ Download Image
Caption: Robert Stalnaker, the Laurance S. Rockefeller Professor in Philosophy, whose teaching and research interests are in philosophical logic, the philosophy of mind, and the philosophy of language
Credits: Jon Sachs, SHASS

Caption:
Robert Stalnaker is the Laurance S. Rockefeller Professor in Philosophy. His teaching and research interests are in philosophical logic, the philosophy of mind, and the philosophy of language.
Credits:
Photo: Jon Sachs/SHASS

While working in a famously esoteric field, MIT philosopher Robert Stalnaker has focused his career on thinking about real-world concerns — including the fundamental nature of speech, thought, and decision-making. In so doing, he has catalyzed and provided the underpinnings for new research in many other areas, such as game theory, linguistics, decision theory, and economics.

In all these research areas, Stalnaker’s influence has been widespread and profound, but his impact on modern linguistics — a field that was just coming into its own in the 1970s — has been especially significant, providing the first clear understanding of what is going on in conditional sentences that are counterfactual.

The language for alternatives and possible worlds

One service of conditional sentences and phrases is to enable people to consider alternatives to the world as it is, which is very useful for reasoning and decision-making in a variety of fields. “Considering possibilities that could, or even won’t, arise are important to explaining, understanding, and deciding,” says Stalnaker, the Laurance S. Rockefeller Professor in Philosophy at MIT. “Hypothetical thinking is central to how we learn things.”

Stephen Yablo, the David W. Skinner Professor in MIT’s philosophy section, notes that Stalnaker’s paper “A Theory of Conditionals,” which first appeared in 1968, remains enormously influential today. “I can’t really explain how huge that has been; it’s one of the most cited papers in philosophy,” Yablo says.

Yet Stalnaker remains a notably modest man, quick to give credit to the philosophers from whom he has drawn ideas. When asked what explains the paper’s influence, Stalnaker says simply: “A lot of it has to do with the timing being right. Certain ideas are ready to come out.”

Stalnaker explains conditional thinking by comparing the world as it is to what the world would be like if certain things had been different. “The concept of a possible world — really meaning just a possible state of the world, a way things might be — is a concept that helps connect concepts in theory of knowledge, theory of discourse, theory of causation, and with understanding practical reasoning about what to do,” Stalnaker says.

Stalnaker’s theory of conditionals — which has proven useful because it helps make sense of human behavior — reveals the pragmatism that is a hallmark of Stalnaker’s work. “Some philosophers like to sit back and contemplate the profundity of philosophical problems, but Bob’s attitude is in line with MIT’s culture — he prefers to roll up his sleeves and try to solve them,” says Professor Alex Byrne, chair of the MIT philosophy section.

Indeed Stalnaker, who got his PhD from Princeton University in 1965 and worked at Yale University, the University of Illinois, and Cornell University before joining the MIT faculty in 1988, says MIT’s reputation for addressing practical concerns is part of what attracted him to the Institute. “We solve problems," he says. "Even though problems in philosophy are extremely abstract — there’s still that creative spirit. MIT has been a great place to work for me.”

Having Stalnaker at the Institute has also been great for MIT’s philosophy section, according to colleagues.

“Bob is a brilliant philosopher and a person of great personal integrity,” says Sally Haslanger, the Ford International Professor at MIT. “He has been a foundation of our intellectual community in the philosophy section, fostering a collaborative mode of doing philosophy together that has produced some of the most creative and influential philosophers of the past quarter-century. Combining an incisive intellect with a gentle modesty, he brings out the best in those around him.”

Now heading into his last year at the Institute — he plans to retire in 2016, though he intends to stay active and to continue his work with graduate students — Stalnaker continues to produce new scholarship. His latest book, "Context," published in 2014 by Oxford University Press, again zeros in on the question of how people manage to understand one another. “This is one of the phenomena that he was the first to really explain in a satisfactory way,” Yablo says.

Expanding in the new book upon a philosophical point he has returned to many times over the years, Stalnaker explains context not as simply a set of facts about the environment, but as an information state that encompasses the attitudes, intentions, motivations, and values of the people involved in discourse.

“There are plenty of words we use that don’t really make sense in a standalone context,” Yablo notes. For example, “If I say, ‘I had dinner, too,’ is that true or not? You can’t tell if you don’t know who else I’m talking about.”

Understanding context is therefore central to understanding human reasoning, Stalnaker says. “Look at cases like hyperbole, metaphor, sarcasm,” he says. “You can exploit the meanings of words to mean something different from what you’re saying.” To really comprehend the meaning of discourse, therefore, one needs to understand, he says, “not only what I know and what you know, but what I know about what you know.”

Science, commonsense, and the search for understanding

In addition to his work in semantics and metaphysics, Stalnaker has also made significant contributions to epistemology, countering the Cartesian view of the world in his 2007 John Locke Lecture, one of the world's most distinguished lecture series in philosophy.

“Understanding the physical world, at least on a commonsense level, is easy. It’s mysterious what’s going on in our minds,” Stalnaker says.

In contrast to Descartes’ assertion that any understanding of the world must begin in the human mind, Stalnaker argues — both in his Locke Lecture and in his book of the same title, "Our Knowledge of the Internal World" (Oxford University Press, 2010) — that humans must begin the search for understanding from the middle, using what we are able to glimpse of the world through science and commonsense.

Such impressive scholarly contributions have made Stalnaker the most famous member of MIT’s philosophy section. He is also among the most beloved. “He’s mentioned in the same breath with demigods … but everybody loves him,” Yablo says. “He still asks the best questions and gives the best advice.”

Byrne agrees. “Fortunately Bob has never let his fame go to his head — he has always been a conscientious and helpful colleague, and takes teaching very seriously,” he says. “Bob has had a deep and lasting influence on our graduate students, many of whom have used or adapted his ideas in their own research, a testament to their lasting value.”

Stalnaker continues to teach philosophy graduate students at MIT, and also serves as a visiting professor at Columbia University.