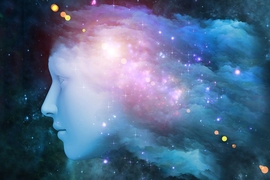 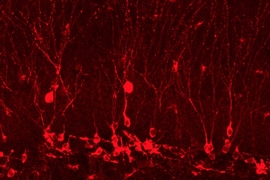 ↓ Download Image
Caption: This image shows newborn cells in the hippocampus that were the result of the researchers' memory reactivation.
Credits: Image: Steve Ramirez Moreno and Susumu Tonegawa 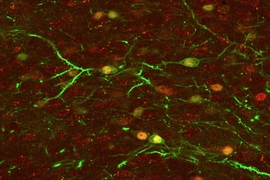 ↓ Download Image
Caption: The nucleus accumbens, a key reward-related structure that lights up when a positive memory is reactivated in the hippocampus.
Credits: Image: Steve Ramirez Moreno and Susumu Tonegawa

Caption:
This image shows newborn cells in the hippocampus that were the result of the researchers' memory reactivation.
Credits:
Image: Steve Ramirez Moreno and Susumu Tonegawa

Caption:
The nucleus accumbens, a key reward-related structure that lights up when a positive memory is reactivated in the hippocampus.
Credits:
Image: Steve Ramirez Moreno and Susumu Tonegawa

MIT neuroscientists have shown that they can cure the symptoms of depression in mice by artificially reactivating happy memories that were formed before the onset of depression.

The findings, described in the June 18 issue of Nature, offer a possible explanation for the success of psychotherapies in which depression patients are encouraged to recall pleasant experiences. They also suggest new ways to treat depression by manipulating the brain cells where memories are stored. The researchers believe this kind of targeted approach could have fewer side effects than most existing antidepressant drugs, which bathe the entire brain.

“Once you identify specific sites in the memory circuit which are not functioning well, or whose boosting will bring a beneficial consequence, there is a possibility of inventing new medical technology where the improvement will be targeted to the specific part of the circuit, rather than administering a drug and letting that drug function everywhere in the brain,” says Susumu Tonegawa, the Picower Professor of Biology and Neuroscience, director of the RIKEN-MIT Center for Neural Circuit Genetics at MIT’s Picower Institute for Learning and Memory, and senior author of the paper.

Although this type of intervention is not yet possible in humans, “This type of analysis gives information as to where to target specific disorders,” Tonegawa adds.

In 2012, Tonegawa, former MIT postdoc Xu Liu, Ramirez, and colleagues first reported that they could label and reactivate clusters of brain cells that store specific memories, which they called engrams. More recently, they showed that they could plant false memories, and that they could switch the emotional associations of a particular memory from positive to negative, and vice versa.

In their new study, the researchers sought to discover if their ability to reactivate existing memories could be exploited to treat depression.

To do this, the researchers first exposed mice to a pleasurable experience. In this case, all of the mice were male and the pleasurable experience consisted of spending time with female mice. During this time, cells in the hippocampus that encode the memory engram were labeled with a light-sensitive protein that activates the neuron in response to blue light.

After the positive memory was formed, the researchers induced depression-like symptoms in the mice by exposing them to chronic stress. These mice show symptoms that mimic those of human sufferers of depression, such as giving up easily when faced with a difficult situation and failing to take pleasure in activities that are normally enjoyable.

However, when the mice were placed in situations designed to test for those symptoms, the researchers found that they could dramatically improve the symptoms by reactivating the neurons that stored the memory of a past enjoyable experience. Those mice began to behave just like mice that had never been depressed — but only for as long as the pleasant memory stayed activated.

In another set of experiments, the researchers found that they could achieve a longer-lasting improvement by reactivating the positive memory cells for 15 minutes, twice a day, for five days, before the mice underwent the tests for depressive behavior. This time, the memories were not reactivated during the test, but the mice behaved just like mice that had never been depressed.

The researchers found that the repeated memory activation provoked formation of new brain cells in a part of the hippocampus called the dentate gyrus. This did not happen during the brief activations during the behavioral tests; instead, depressive behavior was overcome by activation of a circuit connecting engram cells located in the hippocampus, amygdala, and nucleus accumbens.

Interestingly, the researchers found that allowing the mice to engage in pleasurable experiences after becoming depressed did not improve their symptoms nearly as much as reactivating an old memory.

“People who suffer from depression have those positive experiences in the brain, but the brain pieces necessary to recall them are broken. What we’re doing, in mice, is bypassing that circuitry and forcing it to be jump-started,” Ramirez says. “We’re harnessing the brain’s power from within itself and forcing the activation of that positive memory, whereas if you give a natural positive memory to the person or the animal, the depression that they have prevents them from finding that experience rewarding.”

The study suggests a possible scientific explanation for why psychotherapy works for some depressed patients, Tonegawa says. “In some way this depression state suppresses the ability to recall positive experiences, and what the psychiatrist is doing is trying to override that and help them to recall those memories,” he says.

That link between the neural circuit manipulations in mice and therapies now used in humans makes the findings particularly exciting, says Tom Insel, director of the National Institute of Mental Health.

“This is a big step toward helping to understand not only the underlying circuits for a really serious illness like depression, but also the circuits that underlie treatment,” says Insel, who was not involved in the research.

The findings also offer possible new approaches to developing new types of depression treatments, the researchers say. If scientists could develop a noninvasive way to stimulate specific brain circuits, they might be able to achieve the same effects seen in this study using optogenetics. One way to accomplish this could be a more targeted form of deep-brain stimulation, which requires implantation of a brain pacemaker that sends electrical impulses to specific parts of the brain. Deep-brain stimulation is sometimes used to treat Parkinson’s disease, depression, and obsessive-compulsive disorder, among other diseases.

“The problem is that deep-brain stimulation is crude and activates a large chunk of the brain,” Ramirez says. “You could imagine in the future that if you could target deep-brain stimulation not to patches of brain but to specific sets of cells that we think are holding onto a positive memory, then it offers a new therapeutic avenue.”

Postdoctoral fellow Steve Ramirez speaks with Bob Seay, host of WGBH’s Morning Edition, about his work with memory manipulation, which could be helpful for patients with PTSD or Alzheimer’s. Ramirex explains that his research shows the proof of principle “that we can go in and isolate one memory in the brain.”

MIT researchers were able to reverse depression-like behavior by reactivating happy memories, writes Carolyn Gregorie for The Huffington Post. Graduate student and lead author Steve Ramirez “hopes that scientists will one day find a way to prevent depressive symptoms from occurring in the first place.”