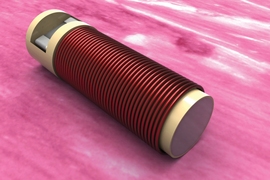 ↓ Download Image
Caption: Illustration of a tiny new biochemical sensor from MIT engineers that can be implanted in cancerous tissue during an initial biopsy.
Credits: Image courtesy of the researchers. 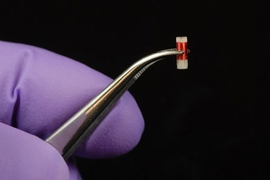 ↓ Download Image
Caption: Once implanted in cancerous tissue, this MIT-developed sensor wirelessly sends data about biomarkers to an external “reader” device, allowing doctors to better monitor a patient’s progress and adjust or switch therapies.
Credits: Photo courtesy of the researchers.

Caption:
Illustration of the tiny biochemical sensor that can be implanted in cancerous tissue during an initial biopsy.
Credits:
Image courtesy of the researchers.

Caption:
Once implanted, the sensor wirelessly sends data about biomarkers to an external “reader” device, allowing doctors to better monitor a patient’s progress and adjust or switch therapies.
Credits:
Photo courtesy of the researchers.

In the battle against cancer, which kills nearly 8 million people worldwide each year, doctors have in their arsenal many powerful weapons, including various forms of chemotherapy and radiation. What they lack, however, is good reconnaissance — a reliable way to obtain real-time data about how well a particular therapy is working for any given patient.

Magnetic resonance imaging and other scanning technologies can indicate the size of a tumor, while the most detailed information about how well a treatment is working comes from pathologists’ examinations of tissue taken in biopsies. Yet these methods offer only snapshots of tumor response, and the invasive nature of biopsies makes them a risky procedure that clinicians try to minimize.

Now, researchers at MIT’s Koch Institute for Integrative Cancer Research are closing that information gap by developing a tiny biochemical sensor that can be implanted in cancerous tissue during the initial biopsy. The sensor then wirelessly sends data about telltale biomarkers to an external “reader” device, allowing doctors to better monitor a patient’s progress and adjust dosages or switch therapies accordingly. Making cancer treatments more targeted and precise would boost their efficacy while reducing patients’ exposure to serious side effects.

“We wanted to make a device that would give us a chemical signal about what’s happening in the tumor,” says Michael Cima, the David H. Koch (1962) Professor in Engineering in the Department of Materials Science and Engineering and a Koch Institute investigator who oversaw the sensor’s development. “Rather than waiting months to see if the tumor is shrinking, you could get an early read to see if you’re moving in the right direction.”

Two MIT doctoral students in Cima’s lab worked with him on the sensor project: Vincent Liu, now a postdoc at MIT, and Christophoros Vassiliou, now a postdoc at the University of California at Berkeley. Their research is featured in a paper in the journal Lab on a Chip that has been published online.

As Cima explains, when cancerous tissue is under assault from chemotherapy agents, it becomes more acidic. “Many times, you can see the response chemically before you see a tumor actually shrink,” Cima says. In fact, some therapies will trigger an immune system reaction, and the inflammation will make the tumor appear to be growing, even while the therapy is effective.

Oxygen levels, meanwhile, can help doctors gauge the proper dose of a therapy such as radiation, since tumors thrive in low-oxygen (hypoxic) conditions. “It turns out that the more hypoxic the tumor is, the more radiation you need,” Cima says. “So, these sensors, read over time, could let you see how hypoxia was changing in the tumor, so you could adjust the radiation accordingly.”

The sensor housing, made of a biocompatible plastic, is small enough to fit into the tip of a biopsy needle. It contains 10 microliters of chemical contrast agents typically used for magnetic resonance imaging (MRI) and an on-board circuit to communicate with the external reader device.

Devising a power source for these sensors was critical, Cima explains. Four years ago, his team built a similar implantable sensor that could be read by an MRI scanner. “MRI scans are expensive and not easy to make part of routine care,” he says. “We wanted to take the next step and put some electronics on the device so we could take these measurements without an MRI.”

For power, these new sensors rely on the reader. Specifically, there’s a metal coil inside the reader and a much smaller coil in the sensor itself. An electric current magnetizes the coil inside the reader, and that magnetic field creates a voltage in the sensor’s coil when the two coils are close together — a process called mutual inductance. The reader sends out a series of pulses, and the sensor “rings back,” as Cima puts it. The variation in this return signal over time is interpreted by a computer to which the reader is wired, revealing changes in the targeted biomarkers.

“With these devices, it’s like taking blood pressure. It’s a simple measurement. You get the readout and move on,” says Ralph Weissleder, a radiologist and director of the Center for Systems Biology lab at Massachusetts General Hospital who is familiar with the research. “Whatever you can do right then and there without any complicated testing, the better it is.

Cima’s team successfully tested the sensors in lab experiments, including implanting them in rodents. While the sensors were only implanted for a few weeks, Cima believes they could be used to monitor a person’s health over many years.

“There are thousands of people alive today, because they have implantable electronics, like pacemakers and defibrillators,” he says. “We’re making these sensors out of materials that are in these kinds of long-term implants, and given that they’re so small, I don’t think there will be a problem.”

These initial experiments showed that the sensors could quickly, reliably, and accurately detect pH and oxygen concentration in tissue. The researchers next want to see how well the sensors do measuring changes in pH over an extended period of time.

“I want to push these probes so we can use them to monitor tumor response,” Cima says. “We did a little bit of that in these experiments, but we need to make that really robust.”

While the primary application of these sensors would be cancer care, Cima is also eager to collaborate with researchers in other fields, such as environmental science. “For example, you could use these to measure dissolved oxygen or pH from a lot of different sites all over a pond or a lake,” Cima says. “I’m excited about using these sensors to bring big data to environmental monitoring.”

A team led by Prof. Michael Cima is developing an implantable sensor that can monitor a tumor’s response to cancer drugs, writes Eric Levenson for Boston.com. “The sensor would function like a long-term medical biopsy, giving doctors a continuous look at how a tumor is developing,” Levenson explains.

Jamie Ducharme writes for Boston Magazine that MIT researchers are developing a biochemical sensor that could provide updates on cancerous tumors. The sensor “could be implanted in cancerous tissue during a patient’s first biopsy. After that, it would stay in the tissue and transmit data about the state of the tumor to an external device.”