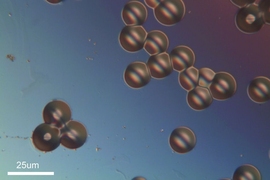 ↓ Download Image
Caption: The device can also be created as a suspension of microparticles that are injected into the body, where they clump together. In this image, the particles are suspended in saline before injection.
Credits: Image: Vincent Liu and Jay Sy

Caption:
The device can also be created as a suspension of microparticles that are injected into the body, where they clump together. In this image, the particles are suspended in saline before injection.
Credits:
Image: Vincent Liu and Jay Sy

Unlike healthy cells, cancer cells thrive when deprived of oxygen. Tumors in low-oxygen environments tend to be more resistant to therapy and spread more aggressively to other parts of the body.

Measuring tumors’ oxygen levels could help doctors make decisions about treatments, but there’s currently no reliable, noninvasive way to make such measurements. However, a new sensor developed at MIT could change that: A research team led by professor Michael Cima has invented an injectable device that reveals oxygen levels over several weeks and can be read with magnetic resonance imaging (MRI).

Using this kind of sensor, doctors may be able to better determine radiation doses and to monitor whether treatments are having the desired effect, according to the researchers, who describe the device in the Proceedings of the National Academy of Sciences the week of April 21.

“In cases where you are trying to make therapeutic decisions, you want to have some numbers that you can fall back on,” says Vincent Liu, a graduate student in Cima’s lab at MIT’s Koch Institute for Integrative Cancer Research and lead author of the paper.

The injectable device is made of two types of silicone — one that provides the MRI signal, and one that offers structural support. This is the first MRI sensor of any kind that can be left in the body for extended periods of time — so far, up to four weeks, in testing with rats.

MRI uses magnetic fields and radio waves that interact with protons in the body to produce detailed images of the body’s interior. Injecting magnetic materials known as contrast agents can help boost the visibility of certain tissues, but these agents are typically designed to break down soon after the MRI is performed.

Doctors often use MRI to diagnose tumors, but currently MRI can only reveal the size and location of a tumor. With the new MIT sensor, doctors could track the state of the tumor and predict how it might respond to radiation treatment, according to the researchers.

Radiation kills tumors by initiating DNA damage, but oxygen is required to help finish the job. An accurate reading of how much oxygen is present would help doctors calculate how much radiation might be necessary. Measuring oxygen levels could also reveal the metastatic potential of a tumor: Those with lower oxygen levels tend to spread more aggressively.

The new MRI sensor combines two forms of silicone — a solid called PDMS and a substance known as DDMPS, which has an oily consistency. The oily DDMPS can be dissolved in PDMS, creating what’s called a “swollen polymer.” The researchers shaped this polymer into a 1.5-millimeter sensor that could be implanted in tissue during a biopsy; they also created smaller particles (tens of microns long) that can be injected through a needle. After injection, these particles clump together to form a solid sensor.

DDMPS absorbs molecular oxygen, which alters the proton spins inside the silicone — a phenomenon that can be detected with MRI. Measuring this shift in the MRI signal reveals how much oxygen is present.

To test the sensors, the researchers implanted them in the hind legs of rats and then measured how the signal changed as the rats breathed pure oxygen, regular air, and pure oxygen again. The sensors detected changes in oxygen pressure as small as 15 millimeters of mercury, and it took less than 10 minutes to see the effects of a change in inhaled gas.

When the experiment was repeated four weeks later, the sensors yielded the same results.

Ralph Weissleder, a professor at Harvard Medical School and director of the Massachusetts General Hospital Center for Molecular Imaging Research, says this type of sensor is a novel way to potentially track how cancer patients respond to treatment.

“The cancer field certainly needs something like this,” says Weissleder, who was not part of the research team. “The ways we currently have to measure oxygen tension are fairly cumbersome and not quantitative, so no one really uses them.”

“What’s happening in a tumor”

This type of sensor could also be useful for monitoring blood flow in diabetic patients, who often experience restricted circulation in their extremities, or people who have suffered traumatic injuries. The researchers also anticipate that it could help scientists learn more about tumor biology.

“As opposed to just studying the genetic profile of tumor cells, this could also reveal how they’re interacting with the stroma that surrounds the tumor. Oxygen tension, as simple as it sounds, is a good measure of what’s happening in a tumor,” Cima says.

The researchers are now working on sensors that could be used to monitor other biological properties, such as pH. “We hope this is the first of many types of solid-state contrast agents where the material responds to its chemical environment in such a way that we can detect it by MRI,” Cima says.

The research was funded by the National Cancer Institute Centers of Cancer Nanotechnology Excellence and the U.S. Army Research Office.