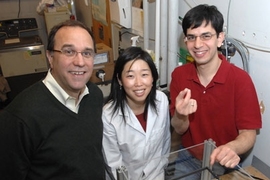 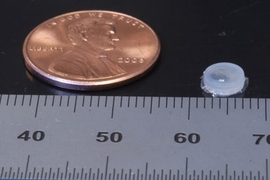 ↓ Download Image
Caption: MIT researchers have developed a device, right, that can be implanted into a tumor to monitor how it responds to treatment.
Credits: Courtesy / Michael Cima

Caption:
MIT researchers have developed a device, right, that can be implanted into a tumor to monitor how it responds to treatment.
Credits:
Courtesy / Michael Cima

Surgical removal of a tissue sample is now the standard for diagnosing cancer. Such procedures, known as biopsies, are accurate but only offer a snapshot of the tumor at a single moment in time.

Monitoring a tumor for weeks or months after the biopsy, tracking its growth and how it responds to treatment, would be much more valuable, says Michael Cima, MIT professor of materials science and engineering, who has developed the first implantable device that can do just that.

Cima and his colleagues recently reported that their device successfully tracked a tumor marker in mice for one month. The work is described in a paper published online in the journal Biosensors & Bioelectronics in April.

Such implants could one day provide up-to-the-minute information about what a tumor is doing -- whether it is growing or shrinking, how it's responding to treatment, and whether it has metastasized or is about to do so.

"What this does is basically take the lab and put it in the patient," said Cima, who is also an investigator at the David H. Koch Institute for Integrative Cancer Research at MIT.

The devices, which could be implanted at the time of biopsy, could also be tailored to monitor chemotherapy agents, allowing doctors to determine whether cancer drugs are reaching the tumors. They can also be designed to measure pH (acidity) or oxygen levels, which reveal tumor metabolism and how it is responding to therapy.

With current tools for detecting whether a tumor has spread, such as biopsy, by the time you have test results it's too late to prevent metastasis, said Cima.

In the Biosensors & Bioelectronics study, human tumors were transplanted into the mice, and the researchers then used the implants to track levels of human chorionic gonadotropin, a hormone produced by human tumor cells.

The cylindrical, 5-millimeter implant contains magnetic nanoparticles coated with antibodies specific to the target molecules. Target molecules enter the implant through a semipermeable membrane, bind to the particles and cause them to clump together. That clumping can be detected by MRI (magnetic resonance imaging).

The device is made of a polymer called polyethylene, which is commonly used in orthopedic implants. The semipermeable membrane, which allows target molecules to enter but keeps the magnetic nanoparticles trapped inside, is made of polycarbonate, a compound used in many plastics.

Cima said he believes an implant to test for pH levels could be commercially available in a few years, followed by devices to test for complex chemicals such as hormones and drugs.

The research was funded by the National Cancer Institute Centers of Cancer Nanotechnology Excellence and the National Science Foundation.