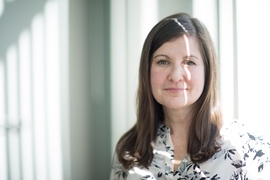 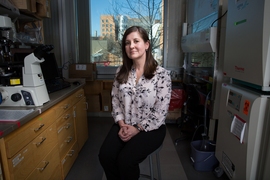 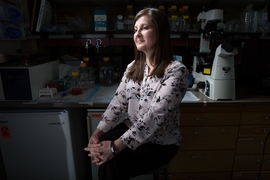 Growing up near Springfield, Mass., Laurie Boyer was always interested in science but didn’t have many opportunities to satisfy her curiosity. She was unsure how to pursue a career in science and was instead encouraged to put her energy into working after school.

However, Boyer persevered and became the first person in her family to attend college, eventually earning a PhD and joining the faculty of MIT’s Department of Biology, where she recently earned tenure. She now studies how cells regulate the complex genetic pathways that control their development from stem cells to mature tissues, especially cardiac tissue.

“I have always been inspired and motivated by solving complex problems in biology,” says Boyer, the Irwin and Helen Sizer Career Development Associate Professor in Biology at MIT. “I’m so incredibly curious that it’s a driving force. I have to have the answer.”

That search for answers has led her to discoveries that may help scientists develop new treatments for heart disease and other conditions, by mimicking how cells naturally transition from immature to mature states, and vice versa.

“The heart has extremely limited capacity to regenerate itself,” she says. “Being able to understand how heart cells are generated during development may actually provide a potential therapeutic down the road.”

After graduating from Framingham State College in 1990, Boyer says she knew a lot about laboratory techniques, but “I still didn’t have a great sense of the big picture, or what the process of doing research was all about,” she recalls.

She got a job at Boston University’s School of Medicine performing clinical tests to diagnose prenatal genetic disorders, which piqued her interest in the mechanisms behind such disorders. “I always had too many questions, and I really wanted to understand the disease,” Boyer says. “Then I worked at Integrated Genetics, which was owned by Genzyme, for a number of years, and again I felt like I always had questions about mechanisms, and how does this work, and why does this happen, and what’s the biology behind it.”

Her supervisor at Integrated Genetics, who had been a postdoc in David Housman’s lab at MIT, encouraged her to take a class that Housman was teaching in the Harvard-MIT Division of Health Sciences and Technology on the molecular basis of genetic disease.

“Twice a week, I would drive to Harvard early in the morning to take the class, and then I would drive to work in Framingham and stay at work late. I loved it,” Boyer says. “At Integrated Genetics we were developing assays for prenatal diagnostics for diseases like spinal muscular atrophy and cystic fibrosis, and I really wanted to understand why these mutations caused a disease, not just test for them.”

The class made her want to apply to graduate school, but she had never had any experience working in an academic lab.

During the class semester, she mustered the courage to speak with Housman about her dream of pursuing a research career. “Before I knew it, he is driving me over to his lab at the time, in E17, and I started volunteering with a postdoc of his. I would work at Genzyme during the day, but then I couldn’t wait to get to MIT to work half the night with this postdoc. From the first minute I was in that environment, it’s like all the lights went on, and I found the energy and the buzz of people discussing science so exciting,” Boyer says.

She spent about a year working in Housman’s lab, looking for genes that might play a role in susceptibility to melanoma. Inspired by this experience, she decided to apply to the University of Massachusetts Medical School for graduate school, where she studied chromatin — the complex formed by DNA and the proteins that surround it.

Working in Craig Peterson’s lab, Boyer studied chromatin remodeling and its role in gene regulation. This was around the time, in the mid-1990s, that scientists first began to think of chromatin as having an important regulatory role in turning genes on and off.

After getting her PhD, Boyer joined Rudolf Jaenisch’s lab as a postdoc at the Whitehead Institute. There, her interests shifted toward understanding how genes are controlled during embryonic development as stem cells differentiate in specialized tissues. Working with Jaenisch and Richard Young, she identified gene targets for three transcription factors known to be necessary for stem cells to remain pluripotent — OCT4, SOX2, and NANOG.

The paper describing those results, published in Cell in 2005, has been cited nearly 3,000 times. That paper, along with the discovery that a type of proteins called polycomb group proteins help control cell fate by repressing certain genes, earned Boyer and Young a spot on Scientific American’s 2006 list of 50 top scientists and science policymakers.

In 2007, Boyer joined the MIT faculty as a member of the Department of Biology, where she continues to study chromatin structure as well as genetic and epigenetic control of development. In particular, she has begun to focus on factors that drive development of the heart.

“The heart is highly sensitive to perturbations in gene expression,” Boyer says. “It’s really critical that genes are precisely regulated at the temporal and spatial level. Even subtle perturbations of gene expression programs during development can lead to congenital heart defects, or even worse, failure to survive.”

In a recent study published in the journal Cell, Boyer’s lab showed that in addition to transcription factors, RNA molecules that do not code for proteins are critical players in regulating the expression of heart genes during development. In another study published in Circulation Research, they characterized the gene expression profiles that allow mice, during the first week of life, to regenerate injured heart cells. “For many years it was thought that mammals did not have this capacity,” Boyer says. “It turns out they do, but they lose it once heart muscle cells fully mature during this one-week window in mice.”

Boyer’s work suggests that heart cells have an intrinsic ability to reverse their developmental clock back to an immature state, which allows them to divide and produce more heart tissue, just like embryonic heart cells. “If we can understand this process at the molecular level, perhaps we can identify factors that we can exploit to promote regeneration,” Boyer says.