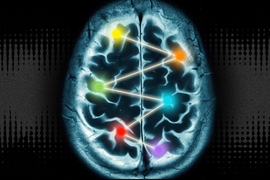 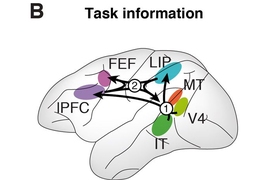 ↓ Download Image
Caption: This image shows the results for the dynamic interplay of the sensory, task, and cue information in the brain's cortex: sensory information (left) flowed from the V4 and MT to several other cortical regions; task information (center) starts in the V4 and IT, before flowing forward and backward; choice signals (right) built up in PFC and LIP, before traveling to cortical regions in the front and back of the brain.
Credits: Courtesy of the researchers

Caption:
This image shows the results for the dynamic interplay of the sensory, task, and cue information in the brain's cortex: sensory information (left) flowed from the V4 and MT to several other cortical regions; task information (center) starts in the V4 and IT, before flowing forward and backward; choice signals (right) built up in PFC and LIP, before traveling to cortical regions in the front and back of the brain.
Credits:
Courtesy of the researchers

Researchers at MIT have proven that the brain’s cortex doesn’t process specific tasks in highly specialized modules — showing that the cortex is, in fact, quite dynamic when sharing information.

Previous studies of the brain have depicted the cortex as a patchwork of function-specific regions. Parts of the visual cortex at the back of the brain, for instance, encode color and motion, while specific frontal and middle regions control more complex functions, such as decision-making. Neuroscientists have long criticized this view as too compartmentalized.

In a paper published today in Science, the researchers from the Picower Institute for Learning and Memory at MIT show that, indeed, multiple cortical regions work together simultaneously to process sensorimotor information — sensory input coupled with related actions — despite their predetermined specialized roles.

“There’s an emerging view in neuroscience that cortical processing is a combination of a network of dynamic areas exchanging information — rather than a patchwork of modules — and that’s what we found,” says Earl Miller, the Picower Professor in MIT’s Department of Brain and Cognitive Sciences, and senior author of the paper.

The researchers used cutting-edge techniques to record neural activity simultaneously, for the first time, across six cortical regions during a task in which the color or motion of dots had to be identified. These regions, ranging from the front to back of the brain, were thought to each specialize in specific sensory or executive functions. Yet the researchers found significant encoding for all information across all regions — but at varying degrees of strength and timing.

These findings, Miller says, could lead to improved treatments for brain disease, attention deficit hyperactivity disorder, stroke, and trauma. “A lot of these [issues] are things going wrong with the cortex, where our critical thought occurs,” he says. “By having a better understanding of how the cortex processes information, we’ll have a better way to treat them in the future.”

Recording such broadly distributed neural activity, Miller adds, also puts to rest the prevalent myth — propagated by popular films such as “Lucy” (2014) — that we only use 10 percent of our brains, and unlocking more would lead to greater abilities. “Such a wide distribution of information is incompatible with the notion that we only use a small fraction of our brains,” Miller says.

The paper’s lead author is Markus Siegel, a principal investigator at the University of Tübingen, and a co-author is Timothy Buschman, an assistant professor at Princeton University.

Processing “below the water”

The notion of a “patchwork” cortex derives partly from functional magnetic resonance imaging (fMRI) studies, conducted in humans, that measure changes in blood flow to reveal which parts of the brain are involved in a particular task. But these tests — which record small differences in blood-flow patterns while a subject performs two separate tasks — don’t reveal overall patterns across the brain. “They’re showing you the tip of the iceberg sticking above the water, when actually, below the water, there’s a lot of processing going on everywhere,” Miller says.

In this new study, the researchers built an array of 108 electrodes that measured neural spikes in 2,694 sites across six cortical regions that are thought to control specific functions: the lateral intraparietal area (LIP) and frontal eye fields (FEF), which control eye movement; the prefrontal cortex (PFC), which controls decision-making; the visual area (V4), which detects color; the middle temporal area (MT), which detects motion; and the inferior temporal cortex (IT), which responds to all visual stimuli.

In an experiment, subjects were shown a group of dots in either red or green, which were moving either up or down. Beforehand, a cue (a gray shape) had indicated whether they should pay attention to color or motion. After being shown the dots, they would identify the correct color or motion with eye movements (left for green, right for red; left for up, right for down).

During the tests, the researchers recorded neural activity during five functions of the sensorimotor pathway (from sensory input to action): identifying the gray shape (cue), deciding to pay attention to motion or color (task), detecting color, detecting motion, and executing eye movement (choice).

Results revealed neural activity, near simultaneously, across the board: Sensory information — for cue, and color or motion — started in the MT and V4, but flowed to the LIP, IT, FEF, and PFC. Task information started in V4 and IT, but flowed forward to PFC and LIP, and onward to the FEF and back to the V4. Choice signals built up in PFC and LIP, before flowing forward and backward to FEF and the V4. In short, despite neural spikes in specific areas, all information was shared widely.

“Some areas may process motion more than color, some may process color more than motion, and sometimes you can see the information rising up in one area before the other,” Miller says. “But generally information is distributed all over the cortex.”

Of particular note, Miller adds, was how widely the executive “choice” signals — deciding which direction to move their eyes — were distributed across the cortex. Previously, it was thought that decisions rise solely in specific cortical areas. “But you see the decision percolating up all over many parts of the cortex simultaneously, so even decision-making is more of an emerging property of many cortical areas,” he says.

"This study is a pioneering effort to go beyond what we can learn from single neurons in one brain area to explore how populations of neurons in a coordinated system interact," says Howard Eichenbaum, director of the Center for Memory and Brain at Boston University. "[T]his work contributes significantly to the next phase of understanding how the brain works as systems of widespread interacting organs."

In providing a better understanding of the cortex’s sensorimotor processing, Miller says, the study may open doors for broader use of noninvasive treatments for stroke recovery, which deliver electrical pulses to increase brain waves in damaged cortical areas to restore sensory or motor functions.

With noninvasive techniques, it’s difficult to target damaged regions, so they’re not widely used. But these new findings suggest precise targeting may not be necessary. “One main concern about noninvasive brain stimulation is how to do that if the cortex is a patchwork of highly specialized structures,” Miller says. “This shows you can actually use things like noninvasive techniques to boost signaling in a whole bunch of areas simultaneously, and you don’t need to worry so much about targeting one specific area.”

The study was funded by the National Institutes of Health.