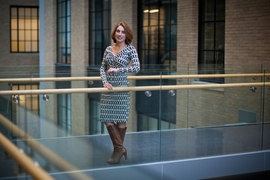 Caption:
A stock image of a flexible printed electric circuit.

MIT is one of several universities in Massachusetts that will support a new federal initiative to boost manufacturing innovation in the area of flexible hybrid electronics (FHEs), a high-potential new generation of electronics that are still in the early stages of development.

MIT will work closely with the University of Massachusetts at Amherst — the leader of the Massachusetts node of the collaboration — and other partners in the Northeast, to support the Manufacturing Innovation Institute for Flexible Hybrid Electronics, managed by FlexTech Alliance, a non-profit research and development group based in San Jose, California.

Members of the consortium include industry leaders such as Boeing and General Motors, as well as a number of leading research universities. A total of $171 million in funding — $75 million in federal grants and more than $96 million in nonfederal contributions — support the initiative.

This newest Manufacturing Innovation Institute, funded by the Department of Defense, is the most recent of seven launched in the last three years by the Obama administration to reinvigorate manufacturing leadership and job creation in the U.S. MIT also plays a key role in two of these previously announced institutes, the American Institute for Manufacturing Integrated Photonics (AIM Photonics) and Lightweight Innovations for Tomorrow (LIFT).

Electronics of the future

Stretchable, bendable, wearable next-generation electronics open the doors to countless innovations — from smart bandages to sensors embedded in bridges and airplanes — but the technology is not yet developed enough for the devices to be manufactured and sold at a large scale and low cost.

For consumers, low-cost FHEs could make a big impact, particularly for medical care. Advances in these devices and their manufacturing could eventually create a world where someone could walk into a local drugstore and buy bandages that monitor and treat wounds, or an arm patch that measures glucose levels and delivers insulin.

“Right now, you can buy a Band-Aid, but you can’t buy — at any reasonable cost — a Band-Aid that would monitor your blood flow and treat your burn,” says Krystyn Van Vliet, a professor of materials science and engineering and biological engineering, and MIT faculty lead for the Advanced Manufacturing Partnership 2.0, the second part of a public-private partnership whose work led in part to the creation of the manufacturing innovation institutes. “There’s a big difference between being able to make something and being able to make something so that it’s a commercial product that creates U.S. job opportunities.”

A dependable means of manufacturing in the U.S. would be advantageous for the military in making use of FHEs — for example, with sensors embedded in military uniforms or airplanes. “Consumers may be buying flexible electronics this year or this decade, but if all of the key components or a few key steps have to be manufactured in another country, then it’s not as easy for the military to make use of those flexible electronics,” Van Vliet explains.

Domestic manufacturing would also be an economic boon. “A lot of really great innovations get invented in the U.S., but you want to invent it here and make it here,” Van Vliet says. “If you can both invent and make in the same place, then you’re able to invent more quickly, invent better, speed standards of living, and create rewarding jobs. If your making happens overseas, then you don't have that rapid feedback.”

“MIT has assembled a team of 10 PIs with extensive history collaborating with industry and successfully translating research to scaled manufacturing,” says Anthony, co-director of MIT’s master of engineering in manufacturing program and Medical Electronics Device Realization Center, and MIT’s lead investigator for the new research partnership. “[We expect] to contribute technical demonstration projects that draw on our experience in design and manufacturing of components of flexible hybrid electronics, including durable electrodes and sensors and rugged energy storage devices, and applications thereof, such as flexible medical electronics.”

Researchers will be working to develop and improve flexible electronic devices as well as low-cost and scalable ways to manufacture those devices, like roll-to-roll manufacturing: the process of creating FHEs on a rolls of flexible plastic or foil similar to plastic wrap and aluminum foil.

“Manufacturing innovation is part of that ‘mens-et-manus’ mentality here,” Van Vliet says, referring to MIT’s motto of “mind and hand.” “It’s thinking about things and then being able to make things. The maker movement is an important part of that, but ‘maker’ means ‘make it once.’ Manufacturing means I can make it many times, and in a way that lots of people can make use of it.”

“In order for this to be possible, the state government has to be very supportive of manufacturing innovation, and the Massachusetts state government has been tremendously so,” Van Vliet says. “We are grateful for support from Governor Baker's administration for the impact that this initiative’s teaching, training, and commercialization opportunities will have on the Commonwealth's economic activity.”