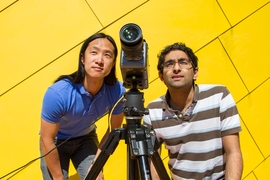 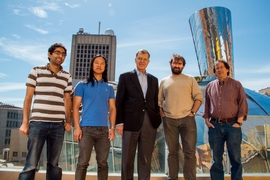 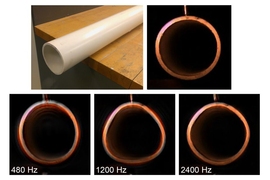 ↓ Download Image
Caption: Motion magnification of the cross-section view of a pipe. The upper images show a still from the original video of the pipe being struck by a hammer. Using motion magnification algorithms, researchers exaggerated the pipe's motion at three frequencies – 480 Hz, 1200 Hz, and 2400 Hz – showing the first three modes of vibration.
Credits: Courtesy of the researchers 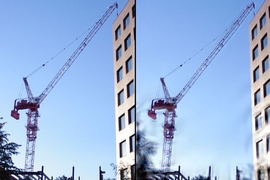 Caption:
Motion magnification of the cross-section view of a pipe. The upper images show a still from the original video of the pipe being struck by a hammer. Using motion magnification algorithms, researchers exaggerated the pipe's motion at three frequencies – 480 Hz, 1200 Hz, and 2400 Hz – showing the first three modes of vibration.
Credits:
Courtesy of the researchers

To the naked eye, buildings and bridges appear fixed in place, unmoved by forces like wind and rain. But in fact, these large structures do experience imperceptibly small vibrations that, depending on their frequency, may indicate instability or structural damage.

MIT researchers have now developed a technique to “see” vibrations that would otherwise be invisible to the naked eye, combining high-speed video with computer vision techniques.

Normally, high-speed video wouldn’t pick up such subtle vibrations from a building. To do this, the researchers employed a computer vision technique called “motion magnification” to break down high-speed frames into certain frequencies, essentially exaggerating tiny, subpixel motions.

In laboratory experiments, the researchers were able to detect tiny vibrations in a steel beam and a PVC pipe. The vibrations measured by the technique matched those picked up by accelerometers and laser vibrometry — precise but expensive techniques commonly used in infrastructure monitoring.

“This could be a noncontact sensor technology that can be used for economic and speedy applications,” Buyukozturk says. “Depending on your objective, perhaps you could use the camera on your cellphone for screening, and if you detect something, you could concentrate on it with a high-power camera. There are levels of inspection, and you don’t always have to start with the highest-quality camera.”

Buyukozturk has co-authored a paper, along with lead author and graduate student Justin Chen, which appears in the Journal of Sound and Vibration. The paper’s other co-authors are graduate student Neal Wadhwa and postdoc Young-Jin Cha, along with professors of computer science and engineering Fredo Durand and William Freeman. The project was developed in cooperation with Dirk Smit and Sergio Kapusta, chief scientists at Royal Dutch Shell, a project sponsor.

Today, engineers typically monitor infrastructure using multiple accelerometers — sensors that measure acceleration, which can then be used to calculate velocity and, ultimately, motion. Accelerometers are very precise, but expensive, costing more than $1,000 each, and a single accelerometer only measures a single point along a structure. Even with an array of sensors, Buyukozturk notes, accelerometers “can’t achieve high density of spatial measurements.” What’s more, as accelerometers are attached to the structures they monitor, they could potentially affect the overall motion, particularly if a given structure is relatively light.

As an alternative, laser vibrometry is a noncontact technique that exposes a structure to a laser beam and an acoustic wave, the velocities of which can be translated to calculate a structure’s displacement, or motion. This method also is incredibly precise — but, like accelerometers, laser vibrometry is time-consuming, measuring only a single point at a time.

Instead, the researchers speculated that a high-speed camera might quickly and easily track vibrations across an entire structure, without making physical contact.

To test their theory, Buyukozturk worked with Durand and Freeman, the original developers of the motion magnification algorithms. In 2012, the pair presented software that effectively boosts certain frequencies in video frames, making it possible to “see” tiny motions, like a person’s pulse, or a vibrating violin string.

Durand and Freeman worked with Buyukozturk, Chen, Wadhwa, and Cha to adapt their code to monitor infrastructure. The code essentially filters a video image into amplitude and phase signals, which can then be combined to reconstruct the video image in which the apparent motions of certain objects are magnified at certain frequencies.

The team carried out experiments using a Phantom v10 high-speed camera. The researchers set up an experiment to compare the technique with standard accelerometers and laser vibrometers. With each technique, the researchers measured the vibrations from a cantilever beam and a PVC pipe after striking them with a hammer.

The subsequent measurements by the motion magnification technique compared well with those of the other sensors. The researchers observed that, without implementing the algorithms, the high-speed videos showed both the beam and pipe remaining apparently immobile. Once they ran the algorithm on the video data, however, they observed a range of shape deformations in each structure as they vibrated. For instance, the beam appears to wobble back and forth, while the pipe’s circumference changes from a circle to an oval, and back again.

Buyukozturk says the technique may be useful in remotely monitoring buildings and bridges, and may be especially useful in surveying pipelines; a pipe’s circumference is naturally symmetrical. If there is a defect on one side, it may not vibrate in the same way as if it were fully intact. The resulting vibration could then be a signal of potential damage.

The group plans to carry out video-monitoring experiments of MIT’s Green Building (Building 54), as well as Boston’s John Hancock Tower, Prudential Tower, and Zakim Bridge. Buyukozturk points out that detecting vibrations in a building or bridge doesn’t necessarily mean there’s something wrong; every structure has a “fundamental frequency” at which it vibrates. Knowing that frequency, he says, may give engineers an idea of how a structure may respond to forces like wind, or even earthquakes.

“People have been working on structural monitoring for the past 30 to 40 years, but we still don’t have an integrated system that can be used readily for structural monitoring of a bridge, let’s say, or a pipe system,” Buyukozturk says. “Our objective is to make several steps of progress toward that, with new innovative methodologies.”

This research was supported in part by Royal Dutch Shell and MIT’s Energy Initiative.