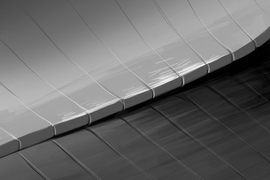 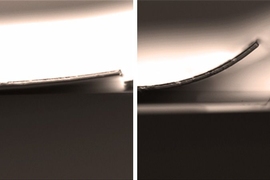 ↓ Download Image
Caption: To test the properties of bonded surfaces, researchers used layered materials (in this case a chromium layer bonded to a silica layer by a layer of epoxy), that were pulled apart, sliced in cross-section, and imaged with a scanning electron microscope. At left, a dry sample shows no debonding of the layers, but at right, a sample exposed to moisture for four weeks shows significant debonding.
Credits: Image courtesy of the researchers

Caption:
To test the properties of bonded surfaces, researchers used layered materials (in this case a chromium layer bonded to a silica layer by a layer of epoxy), that were pulled apart, sliced in cross-section, and imaged with a scanning electron microscope. At left, a dry sample shows no debonding of the layers, but at right, a sample exposed to moisture for four weeks shows significant debonding.

Materials that are firmly bonded together with epoxy and other tough adhesives are ubiquitous in modern life — from crowns on teeth to modern composites used in construction. Yet it has proved remarkably difficult to study how these bonds fracture and fail, and how to make them more resistant to such failures.

Now researchers at MIT have found a way to study these bonding failures directly, revealing the crucial role of moisture in setting the stage for failure. Their findings are published in the journal Proceedings of the National Academy of Science in a paper by MIT professors of civil and environmental engineering Oral Buyukozturk and Markus Buehler; research associate Kurt Broderick of MIT’s Microsystems Technology Laboratories; and doctoral student Denvid Lau, who has since joined the faculty at the City University of Hong Kong.

“The bonding problem is a general problem that is encountered in many disciplines, especially in medicine and dentistry,” says Buyukozturk, whose research has focused on infrastructure, where such problems are also of great importance. “The interface between a base material and epoxy, for example, really controls the properties. If the interface is weak, you lose the entire system.”

Besides dental implants and joint replacements, such bonding is also critical in construction materials such as fiber-reinforced polymers and reinforced concrete. But while such materials are widespread, understanding how they fail is not simple.

There are standard methods for testing the strength of materials and how they may fail structurally, but bonded surfaces are more difficult to model. “When we are concerned with deterioration of this interface when it is degraded by moisture, classical methods can’t handle that,” Buyukozturk says. “The way to approach it is to look at the molecular level.”

When such systems are exposed to moisture, “it initiates new molecules at the interface,” Buyukozturk says, “and that interferes with the bonding mechanism. How do you assess how weak the interface becomes when it is affected? We came up with an innovative method to assess the interface weakening as a result of exposure to environmental effects.”

The team used a combination of molecular simulations and laboratory tests in its assessment. The modeling was based on fundamental principles of molecular interactions, not on empirical data, Buyukozturk says.

In the laboratory tests, Buyukozturk and his colleagues controlled the residual stresses in a metal layer that was bonded and then forcibly removed. “We validated the method, and showed that moisture has a degrading effect,” he says.

The findings could lead to exploration of new ways to prevent moisture from reaching into the bonded layer, perhaps using better sealants. “Moisture is the No. 1 enemy,” Buyukozturk says.

“I think this is going to be an important step toward assessment of the bonding, and enable us to design more durable composites,” he adds. “It gives a quantitative knowledge of the interface” — for example, predicting that under specific conditions, a given bonded material will lose 30 percent of its strength.

Interface problems are universal, Buyukozturk says, occurring in many areas besides biomedicine and construction. “They occur in mechanical devices, in aircraft, electrical equipment, in the packaging of electronic components,” he says. “We feel this will have very broad applications.”

Bonded composite materials are beginning to be widely used in airplane manufacturing; often these composites are then bonded to traditional materials, like aluminum. “We have not had enough experience to prove the durability of these composite systems is going to be there after 20 years,” Buyukozturk says.

Sinan Keten, an assistant professor of mechanical engineering and civil and environmental engineering at Northwestern University who was not involved in this study, says this is “outstanding research” that “addresses shortcomings in our understanding of failure at the interface of dissimilar materials. Such interfaces are ubiquitous in composites, thin films, and many other systems, but measuring the relevant properties to assess materials performance tests the limits of what can be observed with experiments and atomistic simulations.”

Keten adds, “I believe their joint effort spanning theory, experiments, and simulations at the nanoscale will eventually be instrumental in transforming the way we design our built environment.”