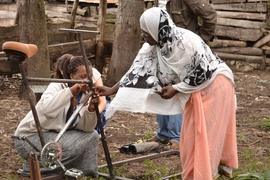 Caption:
At IDDS in Tanzania last summer two participants, Mwanaharusi Goha from Tanzania and Helen Amorin from Ghana, work on building a bicycle-powered coffee bean sheller to be used by local farmers.

This summer, dozens of people in Colombia will learn how to make trash-picking into viable, sustainable businesses, while others in India will learn about low-cost, locally based approaches to medicine and health care. In Botswana, members of local desert populations will work on improved ways of making use of their constrained resources.

It’s all part of this year’s International Development Design Summit, or IDDS, which began on the MIT campus in the summer of 2007. What started as one intensive month-long training in designing technologies for the developing world has been expanding and refining its process ever since. This year’s iterations will be especially ambitious and focused, with sessions on three continents spanning almost three months of collaborative brainstorming, prototyping, and field-testing. A fourth session will take place in Pakistan in January.

The expansion of IDDS into different locales and topic-focused sessions is just one part of the evolution of this exercise in local empowerment, which encourages people to develop locally-sourced solutions to the immediate needs of their own regions, populations, and cultures. Perhaps even more significant, these programs are now explicitly designed to leave a lasting legacy in their host communities, says Amy Smith, an MIT senior lecturer and founder of IDDS and of D-Lab, a set of MIT courses and field programs designed to foster such locally centered development work.

“We’re not only offering more sessions, but we’re doing more with the alumni of the summit,” Smith says, to maintain the momentum developed in the workshops and to harness the skills people develop in these sessions to continue work on their inventions — or develop new ones — after the summit is over.

In some of the host communities, this legacy will take the form of ongoing “maker spaces” within the local villages or towns where the summits take place, encouraging local people to continue to work on developing tools to meet local needs, whether they be better ways of shelling corn or extracting oil from seeds, or better irrigation or sanitation systems, or a way to make saleable crafts out of local materials.

Cali, Colombia, is the setting of the first of this year’s summits, from June 14 to 29, which is focused on the theme of “zero waste.” The session will bring together waste pickers, business leaders, municipal workers, students, and community members from Cali, as well as from other parts of the world, to study waste management and reuse strategies.

Then, a four-week session will be held in Chennai, India, from July 6 to August 1, focused on the theme of “Aarogyam” — which means “good health.” The participants, including health-care workers, business leaders, engineers, and students, will work on developing interventions and technologies to improve access to health care for people in resource-poor villages in the region.

In August, a two-week session will take place in D’Kar, Botswana, an area where the desert-dwelling San people have long used their own inventive techniques to carve out a living under harsh, arid conditions. The summit will focus on improving desert livelihoods, perhaps including attempts to develop some of the technologies and crafts they have into viable products with a potential for social impact.

The long-range continuity of centers and resources that the teams aim to leave as a legacy of the summits was made possible by a grant from the U.S. Agency for International Development (USAID) Global Development Lab, which led to the formation of the International Development Innovation Network, the official organizer and sponsor of IDDS programs. Thanks to this additional funding, not only will workspaces remain after most IDDS sessions, but additional facilities with similar aims will also be given support. “We find a demand from people who come in with design skills and are interested in creating their own maker spaces,” Smith says. They are also working to improve the communications channels for people involved in the IDDS process around the world, to share information about devices, challenges, and ideas that may be useful in other places.

Over the years, the IDDS process has already led to some successful ongoing projects that continue to make a difference in the lives of people in the regions where earlier summits were held, including Ghana, Tanzania, and Brazil. For example, at an IDDS in Tanzania, team members found that some farmers had an excess of avocado production, since the fruit all ripen at about the same time, and much of it was going to waste. The team helped develop ways of extracting the avocado oil, which has a longer shelf life than the fruit and could potentially be stored and marketed. Later, a team of D-Lab students made further trips to pursue the idea and won an MIT IDEAS Global Challenge prize to continue the project, which they will be working on again this summer.

Another team at a summit in Zambia, two years ago, worked on improved grain storage systems to reduce the rate of spoilage and loss to insects or rodents. They developed a kind of grain silo that is highly resistant to these problems, but didn’t have time to perfect it during the summit. Two of the team members have returned to improve the system, which one of them worked on as part of a masters’ thesis, and they have started a business called Zasaka to provide a variety of other services and equipment to farmers in the area, with the help of $75,000 in angel investment, including $20,000 from an MIT D-Lab Scale-Ups Fellowship.

In each of this year’s summits, a majority of the participants will be from the local area, and the hope is that this will lead to even greater continuity of the projects that develop over the summer. “When people start to think of themselves as innovators, how does that change things?” Smith asks. Now, with ever-greater followup of the 450 people who have previously been through the IDDS process (and about 100 more this summer), it should become possible to provide clear and detailed answers to that question.

In The World: Helping Brazilians turn waste into products