Caption:
Members of the MIT Robotics Team describe their entry into the robot road race.
Credits:
Photo courtesy of the MIT Alumni Association.

Caption:
Robots took their marks at the starting line of a machine-only race to benefit an MIT alumna-founded health organization.
Credits:
Photo courtesy of the MIT Alumni Association.

What does the MIT Robotics Team do on a lovely spring Sunday? Compete in a robot race, of course.

The race in question was a fundraiser for Vecna Cares, a nonprofit founded by Deborah Theobald ’95. The global healthcare organization offers hardware and software solutions to underserved areas and developing countries as well as underfunded clinics in the U.S.

The race on April 12 took place in West Cambridge, Massachusetts, and included a human 5-kilometer run and robot 100-meter dash. With more than 200 runners and 25 robots, the event was a huge success. Participants included local robotics companies, hobbyists, kids, and students from several colleges including the MIT Robotics Team. 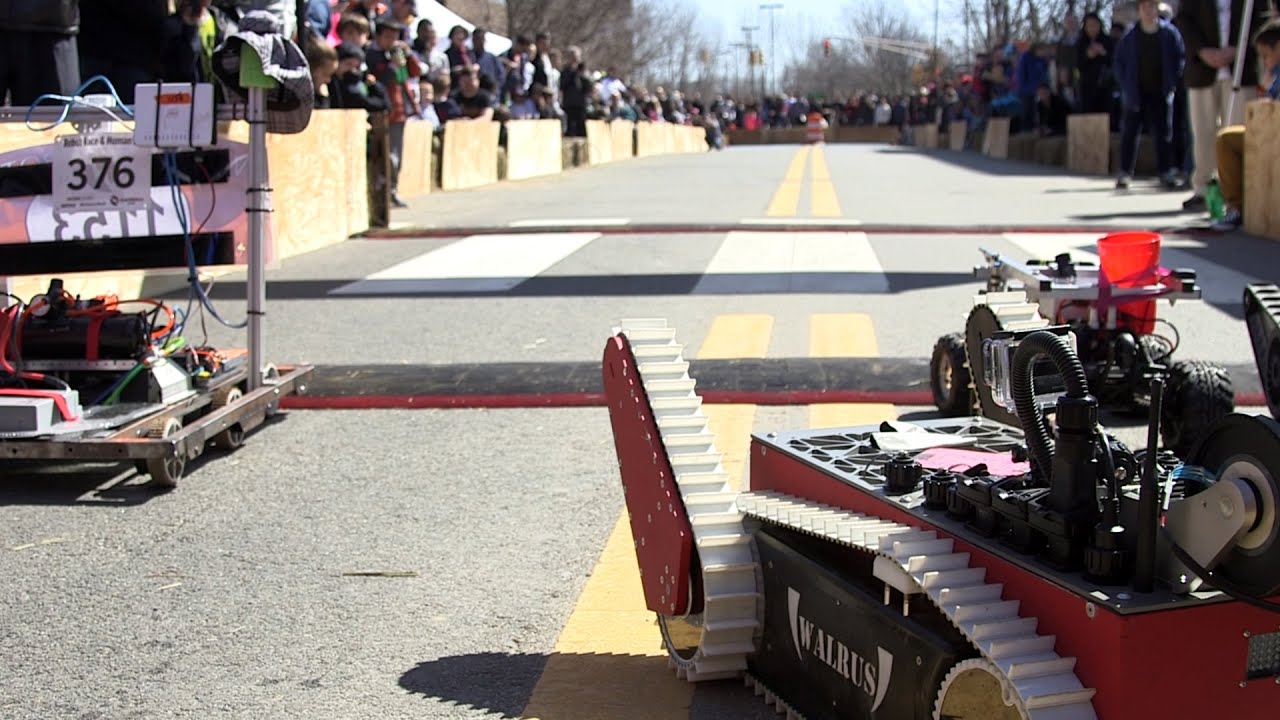 Although the MIT team didn’t win the race, they welcomed the opportunity to prepare and train for upcoming competitions. The team competed with a rover that they built for the NASA RASC-AL Robo-Ops Competition in June.  “It’s basically a tele-op competition where the rover gets sent to NASA Johnson Space Center in Texas,” explained junior Reo Baird, team president. “Three team members go to Texas to provide technical support but the rest of the team stays back on campus and operates the robot remotely.” The team participated in the same NASA competition last year and placed second so this year, Baird says, they hope to return and place first.

All proceeds from the robot race will fund a more cost-effective and efficient redesign of the CliniPAK, Vecna Cares’ primary product — a device that allows users to communicate with other clinics, input medical records, and access medical resources with no power, no connectivity, and very little computer literacy. Theobald started Vecna Cares as a part of a community service initiative through parent company Vecna Technologies. Vecna Technologies is a health care information technology and robotics company with a principal focus on creating technical solutions to improve lives. Theobald co-founded the company in 1998 with husband Daniel Theobald ’95, SM ’98.

“From an early age I knew that I wanted to use technology to solve some of the toughest problems that the world is facing,” he says.

Zac Dydek SM ’07, PhD ’10, who acted as the robot rule enforcer on race day, is the director of autonomous systems at Vecna Technologies and spends his days perfecting the software that “makes the robots smart.” Dydek explains that the race, like everything else at Vecna, is part of the mission to integrate robotics and technology into our lives in meaningful and impactful ways. “The direction that we’re going in with robotics is something that’s going to make the world better for everyone,” says Dydek.