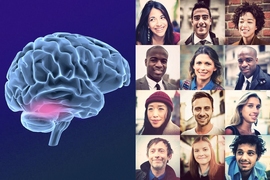 How do primates, including humans, tell faces apart? Scientists have long attributed this ability to so-called “face-detector” (FD) neurons, thought to be responsible for distinguishing faces, among other objects. But no direct evidence has supported this claim.

Now, using optogenetics, a technique that controls neural activity with light, MIT researchers have provided the first evidence that directly links FD neurons to face-discrimination in primates — specifically, differentiating between males and females.

Working with macaque monkeys trained to correctly identify images of male or female faces, the researchers used a light-sensitive protein to suppress subregions of FD neurons in the inferior temporal (IT) cortex, a visual information-processing region. In suppressing the neurons, the researchers observed a small yet significant impairment in the animals’ ability to properly identify genders.

“If these face-detector neurons are participating in face-discriminating behavior — in telling gender of faces apart — then, if we knock them down, the behavior should take a hit,” says Arash Afraz, a research scientist at MIT’s McGovern Institute for Brain Research and lead author of a paper describing the study in the Proceedings of the National Academy of Sciences.

This experiment, Afraz says, marks a step forward in understanding the links between specific neurons and primate behavior. “You actually have to perturb the activation of that neuron and see if you can affect behavior,” he says. “If that happens, it means these neurons are part of the causal chain for that particular behavior.”

By providing a closer look at primate object-recognition, Afraz adds, the study could also aid in developing visual prostheses that may require direct wiring with the IT cortex. More broadly, understanding the light level needed for optogenetic neural silencing could also aid in developing implantable treatments for patients with temporal lobe epilepsy. “We could have devices implanted in the cortex that automatically turn on when the epilepsy attack starts, and silence the cortex with light,” Afraz says.

Co-authors of the study are James DiCarlo, a professor of neuroscience and head of MIT’s Department of Brain and Cognitive Sciences, and Ed Boyden, an associate professor of biological engineering and brain and cognitive sciences whose group developed the optogenetics tools used in the study.

In the 1980s, scientists first hypothesized FD neurons, with studies that recorded spikes in neural activity in response to images of faces. “But we [never had] a clear mechanistic connection between the activation of these neurons and face discrimination, as opposed to face detection,” Afraz says.

For the PNAS paper, the MIT researchers trained two monkeys to identify images of gendered faces with about 90 percent accuracy. To do so, they displayed images of male and female faces with varying features slightly to the left or right of a middle fixation point of a screen. Then, they displayed two dots on the top and bottom of the screen; the monkeys looked at the top dot if the face was female, and at the bottom dot if it was male.

After a month, the monkeys viewed 1,600 grayscale images of male and female faces, during 40 separate sessions, while the researchers delivered random pulses of green light to the ArchT-treated areas. Suppressing only 1 millimeter of high-FD subregions — not low-FD subregions — impaired the animals’ ability to correctly identify gendered faces by, on average, about 2 percent, the researchers found.

Linking tiny clusters of neurons with the perceptual ability to identify genders suggests those neurons are responsible for processing gendered faces, Afraz says. “Wherever a signal is encoded more explicitly in the brain, that part seems to contribute more to the behavior directly,” Afraz explains. “If we know the information of a face’s gender is encoded more explicitly in a small bit of cortex, knocking down that bit of cortex takes a bigger toll on behavior.”

While his lab has researched visual processing for 20 years, DiCarlo notes that “this collaboration with Boyden — who develops cutting-edge tools — is what opened the door to this significant advance, and to an entire new avenue of discovery.”

In particular, as one of the first documented uses of optogenetics to induce behavioral changes in primates, the study also demonstrates the potential for using it to study vision and behaviors in primates, Boyden says. In contrast to traditional neural-suppression methods, for instance, optogenetics tools can zero in on tiny clusters of neurons for brief moments, which can better pinpoint specific neurons as drivers of behavior.

“We’re getting at the actual circuitry of the brain and the exact neurons that are involved in discriminating [between faces],” Boyden says. “These tools offer higher temporal and spatial resolution than any other neural perturbation method.”

William Newsome, a professor of neurobiology at Stanford University, says the study “addresses a fascinating problem in systems neuroscience … in a set of very challenging experiments” that utilize both optogenetics- and pharmaceutical-suppression techniques.

“This,” he adds, “is a powerful demonstration that face-detecting neurons mediate the perceptual ability to discriminate among faces — a very cool result.”

The study was funded by the National Institutes of Health.

Silencing the brain with light