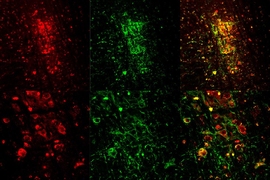 Getting enough of the right kind of sleep is crucial for keeping both body and mind healthy.

Now a team of researchers at MIT has moved a step closer to being able to produce natural sleep patterns.

In a paper published today in the Proceedings of the National Academy of Sciences, the researchers describe how they were able to trigger a period of rapid eye movement (REM), otherwise known as dream sleep, in mice, using a technique that shines light directly on mouse neurons.

Sleep helps the brain recuperate and restore itself, as well as allow it to process memories. It also helps to ensure that the body’s immune and other systems work properly.

The different stages of natural sleep provide different benefits, says the team’s leader, Emery Brown, the Edward Hood Taplin Professor of Medical Engineering at MIT. Studies in rodents have shown that learning occurs during REM sleep, for example, while slow wave sleep, also known as non-REM stage three, is most important for feeling rested and refreshed.

However, these health benefits result only from natural sleep — or alternating 90-minute periods of non-REM and REM sleep — and there are no existing drugs capable of inducing this state.

“What they do is create sedation,” Brown says. “If you are lucky, the sedation allows your natural sleep mechanisms to take over.”

To develop better approaches to creating natural sleep, researchers need to study the extent to which the various sleep stages can be created first separately, and ultimately together, Brown says.

Previous studies have indicated that neurons called cholinergic cells are active during both wakefulness and REM sleep, says the paper’s lead author, Christa Van Dort, a postdoc in Brown’s group in the Department of Brain and Cognitive Sciences at MIT. “There was a lot of early evidence that cholinergic neurons were involved in this area, but nobody could actually say whether the firing of these specific cells was responsible for the transition to REM sleep,” she says.

To investigate whether cholinergic neurons could induce REM sleep, the team used a technique called optogenetics, in which a head-mounted fiber optic device is used to shine light onto a specific group of neurons.

The neurons are first sensitized to light using a protein found in algae. This protein responds to certain wavelengths of light, allowing the algae to move around, Van Dort says. “In 2005, researchers at Stanford [University] were able to put this algae protein into mammalian cells,” she says. “They realized that if you put the protein into certain types of neurons you could then shine a light on them to activate them, and control the firing of the brain, at a single-cell level.”

Van Dort and her colleagues applied the technique to a mouse known to express this algae protein in cholinergic neurons. “In this way we were able to push the mice into dream sleep,” Van Dort says.

They found that activation of cholinergic neurons during non-REM sleep increased the number of REM sleep episodes the mice experienced. When they analyzed the episodes, they discovered that they closely matched natural periods of REM sleep.

The technique helps to clarify the mechanism by which REM sleep is controlled, and is a step toward understanding how to design natural sleep in humans, Van Dort says. Existing drugs used by insomniacs actually repress both REM and the deeper stages of non-REM sleep, and instead put users into a very light sleep state. “Figuring out how each of the components of sleep is controlled can help us design a way of reproducing natural sleep with different drugs in the future,” she says.

In the meantime, triggering more episodes of REM sleep alone could be used to enhance people’s learning and memory, Brown says.

The researchers are now investigating how the cholinergic system connects with other areas of the brain that have also been identified as important in REM sleep production. They are also developing experiments that they hope will lead to the production of better non-REM sleep, Van Dort says.

“The long-term goal is to really understand what controls each phase of non-REM and REM sleep, and then to selectively induce them both, and reproduce the normal cycling of sleep stages,” she says.

Cholinergic control of REM sleep has been an area of longstanding controversy, as previous work has not been able to selectively activate just these neurons, says Robert McCarley, a professor of psychiatry at Harvard Medical School who was not involved in this research. “This pioneering study used optogenetic control of activity of cholinergic neurons to provide evidence that REM induction occurs through activity of cholinergic neurons, those using the neurotransmitter acetylcholine,” McCarley says.

“What is exciting about this study is the use of optogenetics to shed new light on a decades-long conundrum, and it heralds a new era in REM sleep neurophysiology using optogenetics,” he says.