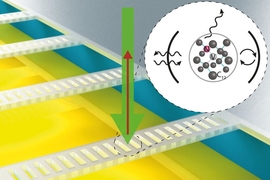 ↓ Download Image
Caption: The researchers' device is a ladderlike structure etched into diamond. The gaps between the ladder's "rungs" act like a mirror, temporarily trapping light particles emitted at the ladder's center.
Credits: Courtesy of the researchers 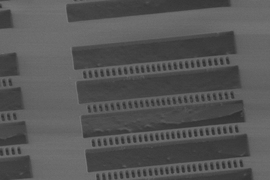 ↓ Download Image
Caption: The researchers' device is a ladderlike structure etched into diamond. The gaps between the ladder's "rungs" act like a mirror, temporarily trapping light particles emitted at the ladder's center.
Credits: Courtesy of the researchers

Caption:
The researchers' device is a ladderlike structure etched into diamond. The gaps between the ladder's "rungs" act like a mirror, temporarily trapping light particles emitted at the ladder's center.
Credits:
Courtesy of the researchers

Quantum computers are experimental devices that promise exponential speedups on some computational problems. Where a bit in a classical computer can represent either a 0 or a 1, a quantum bit, or qubit, can represent 0 and 1 simultaneously, letting quantum computers explore multiple problem solutions in parallel. But such “superpositions” of quantum states are, in practice, difficult to maintain.

In a paper appearing this week in Nature Communications, MIT researchers and colleagues at Brookhaven National Laboratory and the synthetic-diamond company Element Six describe a new design that in experiments extended the superposition time of a promising type of qubit a hundredfold.

In the long term, the work could lead toward practical quantum computers. But in the shorter term, it could enable the indefinite extension of quantum-secured communication links, a commercial application of quantum information technology that currently has a range of less than 100 miles.

The researchers’ qubit design employs nitrogen atoms embedded in synthetic diamond. When nitrogen atoms happen to be situated next to gaps in the diamond’s crystal lattice, they produce “nitrogen vacancies,” which enable researchers to optically control the magnetic orientation, or “spin,” of individual electrons and atomic nuclei. Spin can be up, down, or a superposition of the two.

To date, the most successful demonstrations of quantum computing have involved atoms trapped in magnetic fields. But “holding an atom in vacuum is difficult, so there’s been a big effort to try to trap them in solids,” says Dirk Englund, the Jamieson Career Development Assistant Professor in Electrical Engineering and Computer Science at MIT and corresponding author on the new paper. “In particular, you want a transparent solid, so you can send light in and out. Crystals are better than many other solids, like glass, in that their atoms are nice and regular and their electronic structure is well defined. And amongst all the crystals, diamond is a particularly good host for capturing an atom, because it turns out that the nuclei of diamond are mostly free of magnetic dipoles, which can cause noise on the electron spin.”

In bulk diamond, superpositions of the spins in nitrogen vacancies can last almost a second. But in order to communicate with each other, nitrogen-vacancy qubits need to be able to transfer information via particles of light, or photons. This requires positioning the vacancy inside an optical resonator, which temporarily traps photons.

Previously, devices consisting of nitrogen vacancies inside optical resonators exhibited a superposition time of only around a microsecond. The researchers’ new design gets that up to 200 microseconds.

For quantum computing applications, however, it’s not enough to keep individual qubits in superposition. Their quantum states also need to be “entangled,” so that if one qubit falls out of superposition — if it takes on a definite value of either 0 or 1 — it constrains the possible states of the other qubits.

In systems that use light to move information between nitrogen-vacancy qubits, entanglement occurs when light particles emitted by the qubits reach an optical component — such as a beam splitter — at the same time. With the earlier systems, it generally took several minutes to produce entanglement between qubits. With the new system, it should take milliseconds.

That’s still too long: A practical device would need to entangle photons before their corresponding qubits fell out of superposition, or “decohered.” “But the numbers actually look quite promising,” Englund says. “In the coming years, the entanglement rate could be orders of magnitude faster than the decoherence.”

The researchers’ device consists of a ladderlike diamond structure with a nitrogen vacancy at its center, which is suspended horizontally above a silicon substrate. Shining light perpendicularly onto the ladder kicks the electron in the nitrogen vacancy into a higher-energy state. When it drops back down to its ground state, it releases that excess energy as a photon, whose quantum states can be correlated with its own.

The gaps in the diamond structure — the spaces between rungs in the ladder — act as what’s called a photonic crystal, confining the photon so that it bounces back and forth across the vacancy thousands of times. When the photon finally emerges, it has a high likelihood of traveling along the axis of the ladder, so that it can be guided into an optical fiber.

Practically, the only way to synchronize the photons emitted by different qubits is probabilistically: Repeat the experiment enough, and eventually the photons will arrive at the optical component at the same time. In previous systems, both the time and the direction of the photons’ emission were left to chance. In the new system, the timing is still erratic, but direction is much more reliable. That, together with the greater purity of the emitted light, should reduce the time required to produce entanglement.

The researchers’ manufacturing process begins with a 5-micrometer-thick wafer of synthetic diamond with nitrogen atoms embedded in it at regular intervals, which is , made by Element Six. The MIT researchers use an oxygen plasma to reduce the diamond’s thickness to only 200 nanometers.

The resulting fragments of diamond are too small to etch using standard lithographic processes. So the MIT researchers developed a new technique in which they affix silicon membranes etched into ladder patterns to the diamond, then again use an oxygen plasma to remove the material not shielded by the silicon. They transfer the resulting structures to a chip using a tungsten atomic probe with a slightly sticky drop of silicone at its tip.

“Etching via a hard mask rather than a focused-ion beam seems to have kept the diamond material free of defects, thus sustaining the spin coherence,” says Mete Atature, a reader in physics at the University of Cambridge who was not involved in the research. “This is an important step toward the utilization of nitrogen-vacancy centers as efficient sources of entanglement, quantum repeaters, or quantum memories within a distributed network. The higher collection efficiency will lead to both faster generation and faster verification of entanglement, so it is analogous to being able to increase the clock rate of a computing device.”

A comprehensive map of the SARS-CoV-2 genome