Earth not due for a geomagnetic flip in the near future 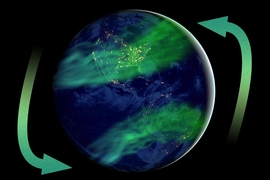 The intensity of Earth’s geomagnetic field has been dropping for the past 200 years, at a rate that some scientists suspect may cause the field to bottom out in 2,000 years, temporarily leaving the planet unprotected against damaging charged particles from the sun. This drop in intensity is associated with periodic geomagnetic field reversals, in which the Earth’s North and South magnetic poles flip polarity, and it could last for several thousand years before returning to a stable, shielding intensity.

With a weakened geomagnetic field, increased solar radiation might damage electronics — from individual pacemakers to entire power grids — and could induce genetic mutations. A reversal may also affect the navigation of animals that use Earth’s magnetic field as an internal compass.

But according to a new MIT study in the Proceedings of the National Academy of Sciences, the geomagnetic field is not in danger of flipping anytime soon: The researchers calculated Earth’s average, stable field intensity over the last 5 million years, and found that today’s intensity is about twice that of the historical average.

This indicates that the current field intensity has a long way to fall before reaching an unstable level that would lead to a reversal.

“It makes a huge difference, knowing if today’s field is a long-term average or is way above the long-term average,” says lead author Huapei Wang, a postdoc in MIT’s Department of Earth, Atmospheric and Planetary Sciences. “Now we know we are way above the unstable zone. Even if the [field intensity] is dropping, we still have a long buffer that we can comfortably rely on.”

Earth has undergone multiple geomagnetic reversals over its lifetime, flip-flopping its polarity at random intervals.

“Sometimes you won’t have a flip for about 40 million years; other times there will be 10 flips in 1 million years,” Wang says. “On average, the duration between two flips is a few hundred thousand years. The last flip was around 780,000 years ago, so we are actually overdue for a flip.”

The most obvious sign of an impending reversal is a geomagnetic field intensity that’s significantly below its historical, long-term average — a sign that the planet is tipping toward an unstable state. While satellites and ground-based observatories have made accurate measurements over the last 200 years of the current field intensity, there are less reliable estimates over the last few million years.

Wang and his colleagues, from Rutgers University and France, sought to measure Earth’s paleomagnetic field using ancient rocks erupted from volcanoes on the Galapagos Islands — an ideal site, since the island chain is on the equator. As Earth’s magnetic field, in its stable configuration, is a dipole, the intensity of the field should be the same at both poles, and half that intensity at the equator.

Wang reasoned that knowing the paleomagnetic field intensity at the equator and the poles would therefore give an accurate estimate of the planet’s average historical intensity.

Rocks from a dipole

Wang obtained samples of ancient volcanic lavas from the Galapagos, while his colleagues from the Scripps Institution of Oceanography at the University of California at San Diego excavated similarly aged rocks from Antarctica. Such volcanic rocks retain information on the geomagnetic field intensity at the time they cooled.

The two teams brought the samples back to their respective labs, and measured the rocks’ natural remanent magnetization, or orientation of ferromagnetic particles. They then heated the rocks, and cooled them in the presence of a known magnetic field, measuring the rocks’ magnetization after cooling.

A rock’s remanent magnetization is proportional to the magnetic field in which it cooled. Therefore, using the data from their experiments, the researchers were able to calculate the peak distribution of the ancient geomagnetic field intensity, both at the equator — about 15 microtesla — and the poles — about 30 microtesla. Today’s field intensities at the same locations are around 30 microtesla and 60 microtesla, respectively — double the historical, long-term values.

“That means today’s value is anomalously high, and even if it’s dropping, it’s dropping to a long-term average, not from an average to zero,” Wang says.

So why have scientists assumed that Earth’s geomagnetic field is dropping to a precipitous low? It turns out this assumption is based on flawed historical data, Wang says.

Scientists have estimated paleomagnetic intensities at various latitudes around the Earth, but Wang’s is the first data from equatorial regions. However, Wang found that scientists were misinterpreting how rocks recorded their magnetic fields, leading to inaccurate estimates of paleomagnetic intensity. Specifically, scientists were assuming that as individual ferromagnetic grains of rocks cooled, their unpaired electron spins assumed a uniform orientation, reflecting the magnetic field intensity.

However, this effect only holds true up to a certain size. In larger grains, unpaired electron spins assume various orientations in different domains of the grain, thereby complicating the field intensity picture.

Wang developed a method to correct for such multidomain effects, and applied the method to his Galapagos lavas. The results, he says, are more reliable than previous estimates of the paleomagnetic field.

As for when Earth may experience its next flip, Wang says the answer is still up in the air.

“What I can say is, if you keep a constant present-day decrease rate, it will take another 1,000 years for the field to drop to its long-term average,” Wang says. “From there, the field intensity may go up again. There’s really no way to predict what will happen after that, given the random nature of the magnetohydrodynamic process of the geodynamo.”

As the findings suggest that today’s field intensity is abnormally high, John Tarduno, a professor of geophysics at the University of Rochester, says scientists will have to reconsider the forces that affect Earth’s geomagnetic field.

“They’re talking changes on much shorter timescales — a million years or less — and big changes in the dipole components of the magnetic fields,” Tarduno says. “That’s actually a challenging idea. If it’s correct, that really makes us have to think differently about the dynamo and how those changes could actually happen.”

A river of plasma, guarding against the sun