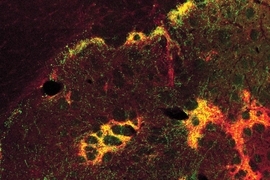 ↓ Download Image
Caption: This image illustrates nerve fibers that originate in a part of the prefrontal cortex associated with emotion. The green shows the termination of fibers from a part of the prefrontal cortex in the striatum; the red depicts striosomes; and the yellow shows their overlap. The researchers found that the striatum — particularly the striosomes — may act as a gatekeeper that processes sensory and emotional information from the cortex to produce a decision on how to react.

Caption:
This image illustrates nerve fibers that originate in a part of the prefrontal cortex associated with emotion. The green shows the termination of fibers from a part of the prefrontal cortex in the striatum; the red depicts striosomes; and the yellow shows their overlap. The researchers found that the striatum — particularly the striosomes — may act as a gatekeeper that processes sensory and emotional information from the cortex to produce a decision on how to react.
Credits:
Courtesy of the researchers

Some decisions arouse far more anxiety than others. Among the most anxiety-provoking are those that involve options with both positive and negative elements, such choosing to take a higher-paying job in a city far from family and friends, versus choosing to stay put with less pay.

MIT researchers have now identified a neural circuit that appears to underlie decision-making in this type of situation, which is known as approach-avoidance conflict. The findings could help researchers to discover new ways to treat psychiatric disorders that feature impaired decision-making, such as depression, schizophrenia, and borderline personality disorder.

“In order to create a treatment for these types of disorders, we need to understand how the decision-making process is working,” says Alexander Friedman, a research scientist at MIT’s McGovern Institute for Brain Research and the lead author of a paper describing the findings in the May 28 issue of Cell.

Friedman and colleagues also demonstrated the first step toward developing possible therapies for these disorders: By manipulating this circuit in rodents, they were able to transform a preference for lower-risk, lower-payoff choices to a preference for bigger payoffs despite their bigger costs.

The new study grew out of an effort to figure out the role of striosomes — clusters of cells distributed through the the striatum, a large brain region involved in coordinating movement and emotion and implicated in some human disorders. Graybiel discovered striosomes many years ago, but their function had remained mysterious, in part because they are so small and deep within the brain that it is difficult to image them with functional magnetic resonance imaging (fMRI).

Previous studies from Graybiel’s lab identified regions of the brain’s prefrontal cortex that project to striosomes. These regions have been implicated in processing emotions, so the researchers suspected that this circuit might also be related to emotion.

To test this idea, the researchers studied mice as they performed five different types of behavioral tasks, including an approach-avoidance scenario. In that situation, rats running a maze had to choose between one option that included strong chocolate, which they like, and bright light, which they don’t, and an option with dimmer light but weaker chocolate.

When humans are forced to make these kinds of cost-benefit decisions, they usually experience anxiety, which influences the choices they make. “This type of task is potentially very relevant to anxiety disorders,” Gibb says. “If we could learn more about this circuitry, maybe we could help people with those disorders.”

The researchers also tested rats in four other scenarios in which the choices were easier and less fraught with anxiety.

Using optogenetics, which allowed them to turn cortical input to the striosomes on or off by shining light on the cortical cells, the researchers found that the circuit connecting the cortex to the striosomes plays a causal role in influencing decisions in the approach-avoidance task, but none at all in other types of decision-making.

When the researchers shut off input to the striosomes from the cortex, they found that the rats began choosing the high-risk, high-reward option as much as 20 percent more often than they had previously chosen it. If the researchers stimulated input to the striosomes, the rats began choosing the high-cost, high-reward option less often.

Paul Glimcher, a professor of physiology and neuroscience at New York University, describes the study as a “masterpiece” and says he is particularly impressed by the use of a new technology, optogenetics, to solve a longstanding mystery. The study also opens up the possibility of studying striosome function in other types of decision-making, he adds.

“This cracks the 20-year puzzle that [Graybiel] wrote — what do the striosomes do?” says Glimcher, who was not part of the research team. “In 10 years we will have a much more complete picture, of which this paper is the foundational stone. She has demonstrated that we can answer this question, and answered it in one area. A lot of labs will now take this up and resolve it in other areas.”

The findings suggest that the striatum, and the striosomes in particular, may act as a gatekeeper that absorbs sensory and emotional information coming from the cortex and integrates it to produce a decision on how to react, the researchers say.

That gatekeeper circuit also appears to include a part of the midbrain called the substantia nigra, which has dopamine-containing cells that play an important role in motivation and movement. The researchers believe that when activated by input from the striosomes, these substantia nigra cells produce a long-term effect on an animal or human patient’s decision-making attitudes.

“We would so like to find a way to use these findings to relieve anxiety disorder, and other disorders in which mood and emotion are affected,” Graybiel says. “That kind of work has a real priority to it.”

In addition to pursuing possible treatments for anxiety disorders, the researchers are now trying to better understand the role of the dopamine-containing substantia nigra cells in this circuit, which plays a critical role in Parkinson’s disease and may also be involved in related disorders.

The research was funded by the National Institute of Mental Health, the CHDI Foundation, the Defense Advanced Research Projects Agency, the U.S. Army Research Office, the Bachmann-Strauss Dystonia and Parkinson Foundation, and the William N. and Bernice E. Bumpus Foundation.