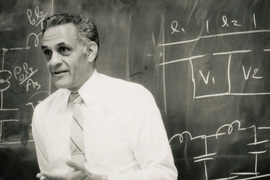 What if the unique properties of diamond could be harnessed for use in electronics? What if a light bulb could operate at 100 percent efficiency? What if the search for extraterrestrial life could be abetted by a deeper understanding of the chemistry of life on Earth?

All of these ideas would be considered big “ifs” by many. That’s what makes these research pursuits perfect for Prof. Amar G. Bose Research Grants, named for a longtime member of the MIT faculty, and the founder of Bose Corporation. As a researcher, Bose — who died in 2013 — was driven to explore controversial areas, and to pursue projects many felt were impossible.

Bose Grants fund high-risk — but potentially high-reward — projects that would be considered impossible to fund through conventional sources, offering up to $500,000 over three years. In the most recent round of grants, proposals from five MIT faculty members — Sylvia Ceyer, Joseph Checkelsky, Jesús del Alamo, Rajeev Ram, and Sara Seager — were selected for funding.

To shape the silicon wafers that are ubiquitous in modern technology, manufacturers rely on chemistry, carving microscopic grooves via chemical reactions on the surface of the silicon in a process known as “etching.” Xenon difluoride (XeF2) gas is one substance commonly used to etch silicon for use in microelectromechanical systems (MEMS) and in photonics. Etching with XeF2 has helped electronics shrink and improve.

But Sylvia Ceyer, the John C. Sheehan Professor of Chemistry, thinks that there’s much more to learn from XeF2’s success in etching silicon.

“In my mind, a unique fundamental … phenomenon is operating in this reaction,” Ceyer wrote in her grant proposal. A deeper understanding of XeF2’s reaction with silicon could enable us to advance technology with better etching techniques, and perhaps even unlock a yet-unknown chemical principle, Ceyer predicts.

“The fundamental principle behind the glaringly high spontaneous etch rate of [silicon] by XeF2 begs to be discovered,” she wrote. “If indeed our hypothesis is confirmed, then the community will have the fundamental knowledge of what it takes to choose dry etchants that react rapidly with a surface of interest. … MEMS and photonics engineers will have a novel tool for surface layer patterning or for etching surfaces into unique shapes to enable silicon photonics that in turn have a chance to beat Moore’s law.”

Joseph Checkelsky, an assistant professor of physics, has set his sights on rare earth electronics. These are electronics made from the rare earth elements — compounds that are vital to many manufacturing processes and products, thanks to their unusual material properties.

“The unique aspects of compounds containing these elements have already opened the doors to significant technological impact in permanent magnet, lighting, and battery technologies,” Checkelsky says.

Yet, Checkelsky pointed out in his grant proposal, “In the field of electronics itself, they have been less impactful.” Part of the reason for that is how challenging rare earths are to work with. “The large number of interacting electrons in these systems makes their behavior difficult to predict and understand,” he explained. Many of these compounds are also so volatile that they rapidly degrade when exposed to air.

Checkelsky seeks to tame the rare earths by constructing a device to create and study them, measuring the materials’ properties while keeping them from ever touching air.

“The Bose award is allowing us to … work with systems often considered too complex and volatile for study,” Checkelsky says. “The principal difficulty in finding a traditional funding source for the present work is also what makes it so exciting: It is impossible to predict what new functionalities will be found in this unexplored materials system.”

Diamond as a semiconductor

With its unusual combination of thermal and electrical properties, diamond was once seen as a promising semiconductor material for use in transistors. But when intensive research in the 1980s and ’90s failed to yield results, the research community backed away from the idea. It was too difficult — seemingly impossible — to manipulate diamond into the right state.

Jesús del Alamo, the Donner Professor in MIT’s Department of Electrical Engineering and Computer Science, is reviving the vision of diamond transistors. Del Alamo cites a breakthrough that he says could overcome the obstacles that the project faced in earlier decades.

Through a technique called “surface transfer doping,” charge is transferred from the surface of diamond to another “acceptor” material. Traditionally, the acceptor material has consisted of adsorbed water at the surface of diamond, which makes for rather unstable transistor characteristics. In a recent breakthrough by the group of Rafi Kalish, a professor of physics at the Technion in Israel and a collaborator of del Alamo, molybdenum trioxide (MoO3) was found to be an exceptionally good acceptor for hydrogen-terminated diamond.

“Diamond as an electronic material has fallen out of grace and all funding agencies seem determined to never revisit it,” del Alamo wrote in his Bose Grant proposal. “The discovery of surface transfer doping in [this system] represents an unexpected opportunity that should make us reconsider.”

The collaboration between del Alamo’s and Kalish’s groups has already yielded the first diamond/MoO3 transistors: Technion-MIT postdoc Alon Vardi carried out the fabrication at the facilities of MIT’s Microsystems Technology Laboratories based on material prepared at the Technion.

Of the research’s potential, del Alamo wrote: “This new material system might hold the key to finally be able to exploit the extraordinary properties of diamond as an electronic material with applications in power electronics, quantum computing, sensing and biologically-compatible electronics.”

Ram envisions a light that uses ambient heat as a partial source of energy. “It is possible to illuminate our homes using environmental heat as an input instead of using electricity as the only energy input,” Ram wrote in his grant proposal.

With such a light source, the electrical-to-optical conversion efficiency — that is, the ratio of electrical energy put in to the light energy gotten out — could theoretically reach 100 percent, or greater. Any energy lost would be made up or exceeded by energy gained from surrounding heat.

Ram’s group has achieved experimental results that support this idea in theory, showing in 2012 that energy from heat could be absorbed by LEDs and used to emit very small amounts of infrared light — wavelengths beyond the range of human eyesight.

“While this result establishes the possibility of greater than 100% efficiency LEDs, it only achieves these efficiencies for infrared (invisible) light at very low powers,” Ram says. “The result is a milestone for device physics but still quite far from a 100% efficient light bulb.”

With the support of the Bose Grant, Ram hopes to make progress toward his goal of useful microelectronics and photonics that utilize heat as an energy input — with a particular focus on 100 percent efficient lighting, which he calls a “lifelong dream.”

Mapping biochemical space to search for life beyond Earth

Sara Seager, the Class of 1941 Professor in MIT’s departments of Earth, Atmospheric and Planetary Sciences and Physics, became intrigued by the prospect of mapping biochemical space to search for life beyond Earth, and for fundamental terrestrial applications, after she spent a considerable amount of time wondering what kind of compounds should be searched for in distant exoplanet atmospheres that may be attributed to life. She noted in her Bose Grant proposal: “The MIT-led NASA TESS mission (launch 2017) combined with the James Webb Space Telescope (launch 2018) will provide the first opportunity to search for life in atmospheres of rocky exoplanets.”

After computationally generating long lists of molecules and scouring the literature, Seager and members of her team found that although this hunch was wrong for standalone molecules, life does indeed produce a large majority of small molecules as distinct structures within larger molecules — and the ones life does not produce fall into specific structural categories.

With the Bose Grant, Seager and her team plan to create a database of all the molecules produced by life and how commonly they are made. “The chemical structure and occurrence information in the database will be analyzed to map biochemistry in a chemical space of motifs, defining what areas of chemical space are easy, hard, and impossible for biochemistry to access,” Seager wrote. “This insight holds promise for understanding the nature and origin of life as well as for applications in drug discovery, toxicology, synthetic biology, and other sciences where chemistry and biology intersect.”

What are the limits of life’s capabilities? Seager and colleagues William Bains of MIT, Janusz Petkowski of ETH Zurich, and Victor Pankratius of MIT Haystack Observatory seek to answer this question by creating a comprehensive “map” of the molecules or molecular motifs produced by organisms on Earth.

“[This] is an example of a high-risk, high-reward kind of research — the kind of reward that could revolutionize our understanding of the universe and our place in it,” Seager wrote.