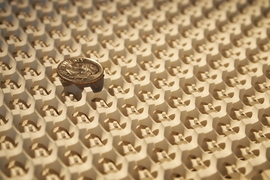 Caption:
The gyroid surface with a dime on top.
Credits:
Image: Ling Lu and Qinghui Yan

Part of a 1929 prediction by physicist Hermann Weyl — of a kind of massless particle that features a singular point in its energy spectrum called the “Weyl point” — has finally been confirmed by direct observation for the first time, says an international team of physicists led by researchers at MIT. The finding could lead to new kinds of high-power single-mode lasers and other optical devices, the team says.

For decades, physicists thought that the subatomic particles called neutrinos were, in fact, the massless particles that Weyl had predicted — a possibility that was ultimately eliminated by the 1998 discovery that neutrinos do have a small mass. While thousands of scientific papers have been written about the theoretical particles, until this year there had seemed little hope of actually confirming their existence.

“Every single paper written about Weyl points was theoretical, until now,” says Marin Soljačić, a professor of physics at MIT and the senior author of a paper published this week in the journal Science confirming the detection. (Another team of researchers at Princeton University and elsewhere independently made a different detection of Weyl particles; their paper appears in the same issue of Science).

Ling Lu, a research scientist at MIT and lead author of that team’s paper, says the elusive points can be thought of as equivalent to theoretical entities known as magnetic monopoles. These do not exist in the real world: They would be the equivalent of cutting a bar magnet in half and ending up with separate north and south magnets, whereas what really happens is you end up with two shorter magnets, each with two poles. But physicists often carry out their calculations in terms of momentum space (also called reciprocal space) rather than ordinary three-dimensional space, Lu explains, and in that framework magnetic monopoles can exist — and their properties match those of Weyl points.

The achievement was made possible by a novel use of a material called a photonic crystal. In this case, Lu was able to calculate precise measurements for the construction of a photonic crystal predicted to produce the manifestation of Weyl points — with dimensions and precise angles between arrays of holes drilled through the material, a configuration known as a gyroid structure. This prediction was then proved correct by a variety of sophisticated measurements that exactly matched the characteristics expected for such points.

Some kinds of gyroid structures exist in nature, Lu points out, such as in certain butterfly wings. In such natural occurrences, gyroids are self-assembled, and their structure was already known and understood.

Two years ago, researchers had predicted that by breaking the symmetries in a kind of mathematical surfaces called “gyroids” in a certain way, it might be possible to generate Weyl points — but realizing that prediction required the team to calculate and build their own materials. In order to make these easier to work with, the crystal was designed to operate at microwave frequencies, but the same principles could be used to make a device that would work with visible light, Lu says. “We know a few groups that are trying to do that,” he says.

A number of applications could take advantage of these new findings, Soljačić says. For example, photonic crystals based on this design could be used to make large-volume single-mode laser devices. Usually, Soljačić says, when you scale up a laser, there are many more modes for the light to follow, making it increasingly difficult to isolate the single desired mode for the laser beam, and drastically limiting the quality of the laser beam that can be delivered.

But with the new system, “No matter how much you scale it up, there are very few possible modes,” he says. “You can scale it up as large as you want, in three dimensions, unlike other optical systems.”

That issue of scalability in optical systems is “quite fundamental,” Lu says; this new approach offers a way to circumvent it. “We have other applications in mind,” he says, to take advantage of the device’s “optical selectivity in a 3-D bulk object.” For example, a block of material could allow only one precise angle and color of light to pass through, while all others would be blocked.

“This is an interesting development, not just because Weyl points have been experimentally observed, but also because they endow the photonics crystals which realize them with unique optical properties,” says Ashvin Vishwanath, a professor of physics at the University of California at Berkeley who was not involved in this research. “Professor Soljačić’s group has a track record of rapidly converting new science into creative devices with industry applications, and I am looking forward to seeing how Weyl photonics crystals evolve.”

Besides Lu and Soljačić, the team included Zhiyu Wang, Dexin Ye, and Lixin Ran of Zhejiang University in China and, at MIT, assistant professor of physics Liang Fu and John Joannopoulos, the Francis Wright Davis Professor of Physics and director of the Institute for Soldier Nanotechnologies (ISN). The work was supported by the U.S. Army through the ISN, the Department of Energy, the National Science Foundation, and the Chinese National Science Foundation.