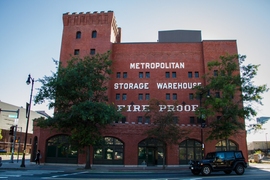 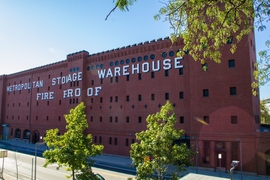 Caption:
Photo of the Metropolitan Storage Warehouse, circa 1950s.

MIT is advancing a proposal to create a new hub for undergraduate residential life that would include housing, dining, maker space, common and study space, and street-level public retail. The proposed development at 134 Massachusetts Ave. — which could house more than 400 students — would incorporate the unique historic nature of the Metropolitan Storage Warehouse and provide needed flexibility as the Institute continues to enhance its undergraduate and graduate student housing stock. Associate Provost Karen Gleason, the Alexander and I. Michael Kasser Professor in the Department of Chemical Engineering, is leading the effort and spoke with MIT News about the project.

Q. How did MIT develop the idea of repurposing a building that is on the National Register of Historic Places into a center for living and collaborative learning?

A. I remember first noticing the Metropolitan Storage Warehouse when I was an MIT freshman, back in 1978, and imagining what possibilities that compelling architecture held — a question that has broadly engaged the curiosity of the MIT community. The Institute has owned the historic building for almost 50 years, and several different reuses have been investigated over time. Along the way, a proposal for a center of undergraduate life bubbled up and has now emerged as an excellent fit for this iconic structure.

It turns out that this structure is really five connected buildings, with the earliest constructed closest to Massachusetts Avenue in 1894. It has always served as a storage facility, and additional buildings were added as the business grew. In fact, the westernmost wall of the structure is a plain brick facade, suggesting that more additions were contemplated. The fifth building was completed in 1911, five years before MIT’s Main Group was completed. It has beautiful internal and external architectural features — including vaulted ceilings, a square corner brick tower, and a crenellated-corbelled cornice — all of which would be preserved in the proposed redevelopment.

The idea for the current proposal to repurpose the Met Warehouse originated with Professor Anton Garcia-Abril, who is a faculty member in the Department of Architecture. His office and studios are directly across from the Met Warehouse, causing him to become deeply intrigued by this building.

Because of the historic nature of the facility, only limited changes can be made to the window openings. But Professor Anton Garcia-Abril developed a breakthrough idea that could allow light to be brought in, while maintaining the structural integrity of the building. His approach involves inserting a series of light wells that would penetrate the interior of the structure and fit precisely with the periodicity of the existing support framework. The dormitory rooms and common rooms near the light wells would then have increased natural light and views of the sky.

Professor Anton Garcia-Abril also envisioned the possibility of adding additional floors on top of the existing historic structure. These upper floors would be highly transparent, and would have spectacular views of the surrounding area.

Q. Do you feel that the location — at the corner of Massachusetts Avenue and Vassar Street — is a compelling feature of the proposal?

A. I really do. The location is at the center of MIT’s campus, both from a north/south and an east/west perspective. Sometimes our community perceives that facilities in the west campus area are further from the main campus than they actually are. Bringing this building into active use will create an added sense of connectedness and cohesiveness. Also, the opportunity to integrate the Met Warehouse into the campus will anchor our planning efforts in the west campus area, where we are in the process of developing a flexible, long-range framework to guide future development, including opportunities to create more student housing.

I think the combination of the central location and the unique features of the building — including the high ceilings, prominent brick construction, and the potential for the modern light wells — is just the right mix to create a sense that this is a place where the future will be invented.

Also, adding an undergraduate residence at this location will provide much-needed flexibility to enable a planned and thoughtful renewal of our undergraduate and graduate dormitory system. The added capability will allow MIT to proactively address some deferred maintenance in its highly utilized undergraduate residence halls. Overall, I think the proposed building will be beneficial to our student community and to the overall plan for the renewal of our residential structures and systems.

Q. What steps have been taken to date, and what are the next steps for the proposal?

A. In order to analyze the idea of using the building as a living and learning community, I convened an advisory group with broad representation from across MIT, in addition to the participation of external experts in the development of historic buildings. I am grateful to all the MIT faculty, students, staff, and professional advisors for their expert advice and willingness to engage and collaborate. In particular, I want to thank Jennifer Marshall from the Office of Campus Planning, who is the lead staff person on the Metropolitan Warehouse Advisory Group.

As this project has progressed, the excitement in the group continues to grow. I am working with the current student representatives to expand the outreach to the undergraduate community this fall.

The advisory group has four subgroups. One subgroup is focused on the undergraduate residential experience; a second subgroup is addressing how best to create successful co-working and study spaces; a third is focused on the programming for the maker space; and the fourth is providing oversight on the structural and architectural issues.

For example, we’ve imagined that the groups of rooms organized around the proposed light wells would form micro-communities with small lounges, and that larger common spaces with diverse functions could be spread throughout the residence hall. Additionally, we’ve proposed that the building have dedicated spaces for broader MIT community use, including maker space, a dining facility, and spaces for group study, meetings, and functions.

We will continue to engage with people about the project. So far, the building concepts have benefitted tremendously from the input of the advisory group and its subgroups. I know that we will continue to refine the many different features of the proposal. The building is brimming with character, so there is a great deal of potential.

Because the building has such important historical significance, we’ve had preliminary conversations with the staff at the Cambridge Historical Commission to ensure that our ideas blend well with the structure and respect its unique features. That interaction is ongoing. In addition, we would need to bring the proposal forward to the Cambridge Planning Board for its review, and there are numerous other considerations that we would need to explore with relevant city departments. We look forward to starting that dialogue this fall.

We’ve also been working carefully with the Metropolitan Storage Warehouse business owners to support their efforts in preparing the building and offering storage alternatives to customers. We know that some people have stored belongings in the facility for a long time, and we are sensitive to the possible disruption that may be caused. We are committed to working collaboratively with Metropolitan Storage and its customers in order to identify the best solutions as the proposal advances.

In the coming months, we will continue to test the feasibility of the mixed-use residence hall concept, including an examination of the amount of light that can be introduced to the interior spaces through the proposed light wells. We’ll be sharing much more information as we go along!

Park to be constructed at Bexley site