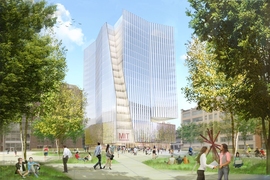 ↓ Download Image
Caption: A rendering of the proposed Site 5, which will include the MIT Museum, research and development facilities, and retail stores.
Credits: Image: Weiss/Manfredi 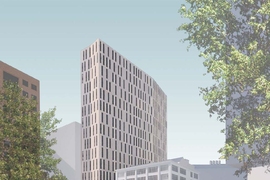 ↓ Download Image
Caption: A rendering of the proposed Site 4, which will include graduate student housing, the MIT Press Bookstore, and additional retail stores.
Credits: Image: NADAAA 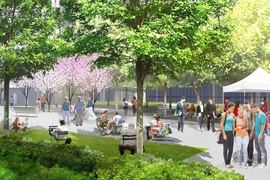 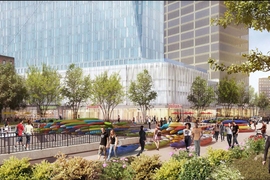 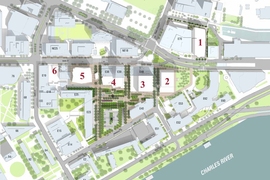 Caption:
A rendering of the proposed Site 5, which will include the MIT Museum, research and development facilities, and retail stores.
Credits:
Image: Weiss/Manfredi

Caption:
A rendering of the proposed Site 4, which will include graduate student housing, the MIT Press Bookstore, and additional retail stores.
Credits:
Image: NADAAA

Nearly 200 people attended two community meetings yesterday on MIT’s Kendall Square Initiative. These meetings were a follow-up to an April update to the MIT community from Provost Martin Schmidt, Chancellor Cynthia Barnhart, and Executive Vice President and Treasurer Israel Ruiz regarding plans in the East Campus/Kendall Square area, and the launch of a study process for the West Campus area.

The two identical meetings — one held at noon at the Stratton Student Center and another held at 6 p.m. at the Kendall Square Marriott — included a presentation of the proposed designs for six buildings to be developed on MIT-owned parking lots in the East Campus/Kendall Square area. Schmidt, Ruiz, Associate Provost Karen Gleason, Managing Director of Real Estate Steve Marsh, and several of the Initiative’s architects took turns presenting the overall development plan, including the building designs, open space framework, retail strategy, and sustainability approach.

MIT officials summarized the overarching priorities for the Kendall Square Initiative, including advancing Kendall Square as a destination with diverse retail and active open spaces; as a residential center with mixed-income market housing and graduate student housing; and as an innovation and academic district that will serve to accelerate the Institute’s mission.

They also described the next step for the development, which is the “Article 19” project review process with the City of Cambridge Planning Board. In introducing the presentation, Ruiz thanked those gathered for their role in shaping the Initiative. “It is truly a better project because of your participation and input,” he said.

The primarily positive — and sometimes enthusiastic — comments and questions raised by the MIT and Cambridge attendees at the meetings covered a wide range of topics, including transportation, housing, parking, open space, food trucks, building design, retail amenities such as a market and drugstore, bicycle and pedestrian access, connections to the Charles River, and the timing and proposed phasing of the development.

One of the most frequently raised topics throughout the public engagement process has related to the creation of housing. MIT has always planned to include housing at the One Broadway parcel, but as a result of feedback from both the MIT and Cambridge communities, the housing at that site has increased significantly — to about 290 units of mixed-income market housing, including 50 units designated as affordable housing.

Also in response to both MIT and Cambridge input, the Institute decided to add plans for a new residence hall for graduate students in the heart of Kendall Square. This facility will replace the 201 graduate housing units currently located in Eastgate, and will add approximately 270 more, for a total of approximately 470 units.

In describing the new graduate student housing, Schmidt cited the thorough work of the Graduate Student Housing Working Group, led by former chancellor Phillip Clay, the Class of 1922 Professor in the Department of Urban Studies and Planning. “The working group carried out a very careful review of issues related to housing our graduate student population, resulting in a recommendation for new accommodations for 500 to 600 graduate students to address current unmet need,” Schmidt said. “We’re pleased to be able to implement half of that number in this development, and will look to other sections of the campus to site the other half.”

Taken together, the new building at One Broadway and the new graduate residence hall will provide over 500 net new housing units in Kendall Square.

Building on the careful analyses and recommendations from several MIT studies related to Kendall Square, East Campus, and graduate housing, MIT moved ahead — with faculty leadership from the School of Architecture and Planning (SA+P) — to engage with five teams of architects to design the new buildings. As a result, the designs are quite varied, reflecting the diverse and exciting nature of the Kendall Square innovation district.

Marsh noted the vital role played by the former and current SA+P deans, Adele Naude Santos and Hashim Sarkis, and the former and current heads of the Department of Architecture, Nader Tehrani and J. Meejin Yoon. “Having all four of these faculty leaders involved in the initiative has ensured a seamless knitting together of the varying elements of the project,” Marsh said.

Another topic that has been of great interest to the broader community has been the function and feel of the proposed open space. Extensive input has led to a plan that recaptures approximately 3 acres of existing parking lots south of Main Street to create a connected series of open spaces that will reflect the community’s desire for active programming and recreation.

“We want everyone to feel not only welcome, but warmly invited to participate in the offerings of this area,” Marsh said. The plan also enables increased activation of Main Street and Broad Canal Way through new and enhanced retail.

The City of Cambridge approved MIT’s zoning for the land it owns in Kendall Square in April 2013 after an extensive five-year engagement process. The approved zoning sets physical parameters for the buildings — including design requirements, heights, setbacks, and density — and establishes minimum thresholds for affordable housing, retail, open space, and innovation space.

The zoning process also resulted in MIT’s commitment to a range of community benefits, including contributions to Cambridge-based nonprofits; a feasibility study regarding the use of MIT’s property adjacent to the existing Grand Junction railroad tracks, parallel to Vassar Street, as a community path; the transfer of an MIT-owned parcel located in Area IV to the City of Cambridge; and the establishment of an open space and retail advisory committee, among several other programs.

More information about the project can be found on the Kendall Square Initiative website. Questions, comments, and ideas can be sent to kendallsquare@mit.edu.

Kendall Square: A global center for innovation grows alongside MIT

Letter regarding the final report on graduate student housing