3 Questions: David Singer on China and the renminbi 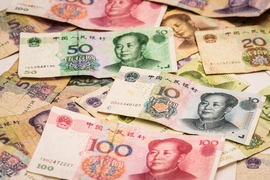 ↓ Download Image
Caption: “Symbolically, the IMF has raised the status of the renminbi by placing it in the same category as the dollar, euro, yen, and pound,” David Singer says.

Caption:
“Symbolically, the IMF has raised the status of the renminbi by placing it in the same category as the dollar, euro, yen, and pound,” David Singer says.

The International Monetary Fund (IMF) made headline news this week by designating China’s currency, the renminbi, one of five “special drawing right” currencies, which may increase its use globally. Since China’s currency policy has often been a source of international political tension, we asked David Singer, associate professor of political science at MIT and a leading expert on currency politics, to explain the implications of China’s new currency status.

Q. What is the significance of the IMF’s announcement?

A. The IMF announced that the renminbi will be included in the basket of currencies that make up the “special drawing right” (SDR), a reserve asset created by the IMF in 1969. This decision has both symbolic and practical significance. Symbolically, the IMF has raised the status of the renminbi by placing it in the same category as the dollar, euro, yen, and pound, which together have made up the SDR basket since it was last updated in 1999. The practical significance is that the IMF’s decision constitutes a “seal of approval” that could prompt greater global use of the renminbi by central banks, other financial institutions, and multinational corporations.  The benefits to China could be immense: lower borrowing costs on sovereign bond markets, greater profits for Chinese financial institutions, and easier access to capital for Chinese firms and households.

Over the past several years, China has made it easier for foreign central banks to buy and sell renminbi and for investors to purchase renminbi-denominated bonds. Moreover, China has gradually adjusted its exchange-rate policy from a strict dollar peg to today’s policy of allowing market forces to play a greater role. Many observers believe that China must undertake many additional reforms to foster an open economy with deep and liquid financial markets, but the IMF’s decision constitutes an official acknowledgement that the renminbi has already become an important “freely usable” global currency.

Q. In the near term, what impact would you anticipate the IMF’s decision having, either on government decisions or in markets?

A. To be honest, I think the press has exaggerated the potential impact of the IMF’s decision. One headline proclaimed “IMF Approves Reserve-Currency Status” for the renminbi, but this is misleading. Central banks around the world are free to hold whichever currencies they believe are most appropriate for their needs. The four elite currencies are widely held, but there are others that find their way into central banks’ coffers.

The IMF reports that as of the second quarter of 2015, central banks held over $125 billion worth of Canadian dollars and a similar amount of Australian dollars, not too far behind their $255 billion stash of Japanese yen. The Canadian and Australian dollars are not constituents of the SDR, but nevertheless central banks find these currencies to be safe, stable, and useful for facilitating international commerce. Central banks also hold substantial amounts of Swiss francs and, yes, renminbi.

Central banks are similar to other investors in that they are attracted to countries with deep and transparent financial markets, free movement of goods and capital across borders, strict rule of law, and stable political systems. If the renminbi becomes more internationalized in the coming years, it will be attributable to China’s advances in these areas rather than the IMF’s decision regarding the composition of the SDR basket.

Q. Then let’s look at the political side of this again. Does this move put pressure on China to adjust its legal or political systems in any way?

A. China’s currency policy has been a hot-button issue in U.S. politics for years. Since the 1990s, many politicians and business leaders have called on the U.S. Treasury to label China a “currency manipulator,” a charge that could open the door for protectionist measures like tariffs. On this issue, the IMF’s decision is a double-edged sword. The new status of the renminbi helps to shield China against politically charged accusations of currency manipulation from U.S. politicians, but it also makes China more vulnerable to calls for greater economic liberalization. As many observers have noted, the renminbi is not yet freely “convertible”— there remain many government-imposed restrictions on the ability of foreigners to invest in stocks, real estate, and other assets, and domestic residents face similar obstacles to using their renminbi for foreign purchases. U.S. politicians and business leaders will no doubt use the renminbi’s new status as a political tool to push China for further reforms. Their mantra will be: If the renminbi is to sit comfortably alongside the other elite currencies of the world, then the Chinese economy should reflect the same standards of open exchange that are embraced by its elite peers.