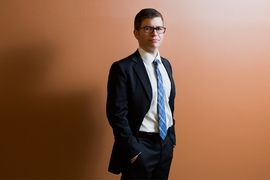 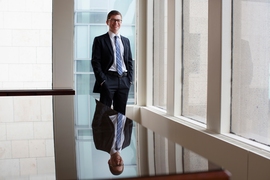 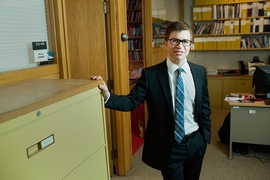 “Unfortunately, banking crises tend to happen fairly often, even though our memory of them fades fairly quickly,” says David Singer, an associate professor of political science at MIT. For most people, it would be good to avoid these periods of crisis — which means understanding why they happen in the first place.

That is the subject of an ambitious book project that Singer and his colleague Mark Copelovitch of the University of Wisconsin are undertaking as part of a global examination of the causes of banking crises since the 1970s.

“We’re trying to understand why banks in some countries collapse, sometimes in the face of shocks, while other countries seem to have more resilient banking systems,” Singer says. To do that, he and Copelovitch are combing through corporate data, international financial statistics — and political conditions, since financial-sector policy plays a role, too. So while financial crises have largely been the domain of economists, Singer thinks scholars from other fields should be part of the discussion.

“These are inherently political as well as economic questions, and political scientists should be among those leading the charge to provide explanations,” Singer adds.

Indeed, a hallmark of Singer’s work has been granular empirical research uncovering the connections between global capital flows and government policies. For instance, Singer has conducted innovative research showing how remittances — the money migrant workers send back to their home countries — constitute such a large flow of cash that they sometimes influence the decisions governments make about exchange rates.

Singer has published several other articles in major political science journals about exchange rates and monetary policy, and is the author of a 2007 book, “Regulating Capital,” about financial rules in the globalizing economy. He received tenure at MIT last year.

Still, Singer views research as just one facet of his job. He is also an associate housemaster in an MIT residence hall, where fostering a sense of campus community, he emphasizes, is as important as his activities as a scholar and teacher.

“It’s absolutely great,” Singer says of being a housemaster. “I would say it’s the best thing I’ve done at MIT.”

Thinking politics, in a systematic way

Singer was born in New Jersey and grew up in Ann Arbor, Mich., where his father worked for a pharmaceutical company. He stayed in his hometown to attend the University of Michigan as an undergraduate, receiving his BA in political science in 1994, after being inspired to delve into the subject by A.F.K. Organski, a prominent professor in the field.

“He was the one who taught me that we can think about the political world in a systematic way,” Singer says.

After college, Singer spent a few years working for technology firms and, briefly, in finance for Merrill Lynch. In the long run, though, he wanted to tackle hard problems in political science. He received his master’s and PhD from Harvard University in 2000 and 2004, respectively, and, after a couple of years as an assistant professor at the University of Notre Dame, accepted a job at MIT in 2006.

Singer’s interest in migrant remittances was spurred by one of his Harvard advisors, Devesh Kapur, who offered the idea that these remittances were larger, in aggregate, than almost anyone realized.

“At first I was skeptical,” Singer recounts. “But then I went and looked at the data, and found that migrant remittances were often the largest source of finance for emerging-market and developing countries. People didn’t realize just how large the magnitude of the flows really was.”

In one 2010 paper, published in the American Political Science Review, Singer found massive differences in the amounts of remittances across 74 countries, which in turned caused states to either fix exchange rates (if remittances were high, providing more liquidity for that country’s economy) or make the rates floating (if remittances were low).

Producing such research requires some creativity. “The data are not often readily available for the things I study, so it takes some digging,” Singer says. For the current book project, he and Copelovitch are using banks’ balance-sheet data, along with global macroeconomic data — but they also have to devise and code their own measuring systems, for things like the scope of bank activities and regulation.

Singer’s research constitutes just one part of his professorial role, as he sees it. As an associate housemaster in MacGregor House, Singer emphasizes, he invests considerable effort into fostering a sense of community: He regularly hosts Sunday brunches for students, listens to their concerns, and makes students feel welcome on campus.

“It’s been a great opportunity to get to know the students on their own turf, and to appreciate and support them,” Singer says.

Beyond research, teaching, and campus life, Singer appreciates the opportunities MIT has provided him to travel widely and discuss his research internationally. In recent years he has discussed the connection between policy and global capital flows with government officials and policy experts in countries including Germany, Oman, and the Philippines.

More of that may be forthcoming as his current book project progresses; Singer wants to see more researchers involved in public discussion of banking regulations. To those who say high-risk financial innovations are necessary, and make banking crises inevitable, he has a simple rejoinder: “Crises don’t have to happen as frequently, and they don’t have to be as severe when they do happen.”

Alternately, to those who support further banking reform, Singer thinks additional empirical research would be useful.

“As a political scientist, my goal is to try to explain why governments make the decisions that they do, and why outcomes seem to happen,” Singer explains. “If we can come up with some explanation for why some banking systems are more resilient than others, we need to get it out into the broader discussion.”

Prof. David Singer weighs in on the Federal Reserve’s decision to raise its target interest rate in this article for The Conversation. Singer writes that, “a less appreciated facet of liftoff is that the Fed’s balance sheet is now so large that raising interest rates is logistically and mechanically challenging.”