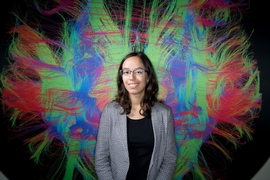 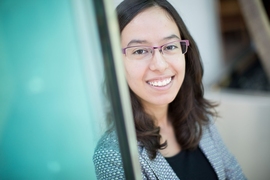 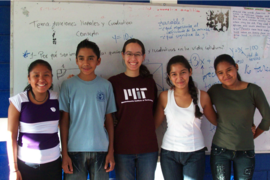 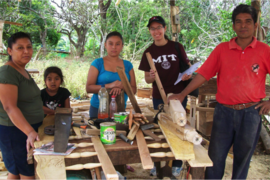 MIT senior Sofia Essayan-Perez, majoring in brain and cognitive sciences with a minor in applied international studies, has founded an educational nonprofit, conducted neuroscience research, and tutored MIT students. The common thread that binds these disparate interests: They all stem from hardships that those around her have faced.

Essayan-Perez was born in Boston, but spent her formative years moving among Chile, Nicaragua, the United States, and Canada, as her parents, both researchers in the social sciences, took on international projects. This diversity of experiences and environments has shaped Essayan-Perez’s nuanced view of the social disparities and scientific challenges she aims to tackle.

When she was just 12, Essayan-Perez was struck by the lack of infrastructure supporting math and science in Nicaragua, where some of her relatives lived. “I observed that rural schools lacked science books and lab equipment,” she says. “That really got to me, as someone who was fascinated by science at an early age.”

Today, Essayan-Perez frequently says that she “uses science for service.” She began by leading human biology workshops for girls in Nicaraguan villages; since arriving at MIT, she has worked with rural Nicaraguan high schools to strengthen math and science teaching, supported by fellowships from MIT’s Public Service Center. She has gone on to found Instrui, a nonprofit that offers open-source lesson plans and student-made educational videos in science and math to high schools in impoverished and developing countries. The lesson plans currently reach 3,500 students.

With Instrui, Essayan-Perez aims to make abstract subjects applicable to the daily lives of students. She believes that the key to opening the door to science, technology, engineering, and math (STEM) education in rural areas is considering the specific needs of students in such places. In Nicaragua, she hopes to create engaged learners who will eventually pursue medical and engineering careers in a country where only 5 percent of students currently pass university entrance exams in mathematics.

During one of her trips to Nicaragua, local health workers told Essayan-Perez that many students had gotten sick from contaminated water, sparking her idea of using community health risks as a basis for teaching math and science.

“When doctors tell the villagers to use a certain ratio of chlorine pellets in their water, that’s a tangible example of ratios,” Essayan-Perez says. “Examples like these became concrete ways of explaining math concepts, compared to rote memorization.”

The seven Nicaraguan villages she works in also have consistent issues with contamination of underground water supplies, largely due to shoddily constructed latrines. Essayan-Perez showed students how they could use what they learned in geometry to decrease their communities’ risks of water contamination.

“Health and education are often viewed as two totally disconnected things, but I don’t see it that way,” she says.

In developing her approach to integrating STEM lesson-planning and relevant health problems, Essayan-Perez worked with mentor Alexander Slocum, the Neil and Jane Pappalardo Professor of Mechanical Engineering, beginning as a freshman.

“He really encouraged me to conduct fieldwork and shadow locals to understand what matters most to the communities where I work, and I think this was an important piece of advice,” Essayan-Perez says.

She also attributes this changed perspective to her minor in applied international studies and her coursework in anthropology, which have helped her understand social disparities.

Essayan-Perez hopes to build capacity in these rural villages. She has already seen local teachers and students implementing their own math and science lesson plans based on the approach she introduced, and would like to see this continue. She has also observed workers in health clinics collaborate with high schools to incorporate health education into the curriculum.

Relating to the brain

Back at MIT, Essayan-Perez approaches neuroscience research with a similar passion. She is interested in brain plasticity — the ability of neurons to rewire themselves, especially in the young brain. She studies how brain plasticity functions, or fails to function, in the brains of people with autism, which she sees as “an incredibly challenging social problem that we’re facing.”

Initially interested in biology more generally, brain and cognitive sciences piqued Essayan-Perez’ curiosity after a teacher recommended she compete in the Brain Bee, an annual international high school neuroscience competition: “Every topic I read kept pointing out how little we know about the brain,” she says.

While at MIT, she’s held an ongoing research position in the lab of Mark Bear, the Picower Professor of Neuroscience, in MIT’s Picower Institute for Learning and Memory. She has also conducted research at the University of California at Berkeley, and at the Institut Pasteur in Paris, under Thomas Bourgeron — a position she obtained through an MIT International Science and Technology Initiatives (MISTI) grant.

In Bear’s and Bourgeron’s labs, she honed her interest in the synaptic plasticity of autism. Her research not only focused on the genetic mutations correlated with autism, but also on how those mutations create differences in cell structure and brain anatomy.

“[Bourgeron’s lab was] working directly with a physician — a child psychiatrist — who would see the patients, and help gather patient data, but they also had researchers who were investigating at the bench-level what was going on,” Essayan-Perez says. “That translational approach, of using clinical and at the same time basic research tools, was really formative for me.”

In Bear’s lab, Essayan-Perez has been studying changes in neuron structure during brain plasticity, contributing to understanding the weakening of neural connections, and how this process is affected by autism. “The Bear lab’s approach of investigating basic science and applying it to address neurodevelopmental disorders has influenced my research goals,” Essayan-Perez says.

Her drive to understand autism comes from the same instinct to help everyone reach his or her full potential.

Still more hours in the day

Outside of the lab and classroom and her international projects, Essayan-Perez teaches math and science on campus. She is a teaching assistant for calculus in MIT’s Experimental Studies Group and tutors in the Office of Minority Education and biology department. She also enjoys opera and Latin dance, with particular interests in bachata, salsa, and also folkloric Nicaraguan dance — which, she admits, is “hard to find in North America.”

Essayan-Perez hopes to become a physician-scientist, combining clinical work and research to innovate diagnosis and therapeutic alternatives for neurological disorders. “I’d like to continue integrating health and education,” she says. “It underlies everything that I do, and that’s something I’m going to continue and expand.”

A new piece to the autism puzzle