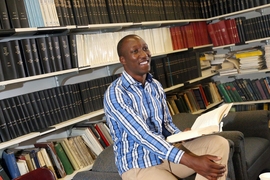 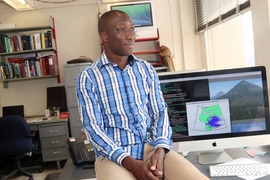 Caption:
Gasore gives a tour of the Rwanda Climate Observatory to scientists from East Africa and the European Union.
Credits:
Photo courtesy of Jimmy Gasore

All around the planet, high-frequency climate observatories are collecting atmospheric data around the clock as part of the Advanced Global Atmospheric Gases Experiment (AGAGE), a 35-year-old project to study emissions and climate change.

But there’s one problem: Despite a network of observatories that covers much of the globe, AGAGE lacks data on Africa — the world’s second-largest continent.

That’s something that Jimmy Gasore, along with other scientists, is trying to change. Gasore, a fourth-year graduate student in MIT’s Department of Earth, Atmospheric and Planetary Sciences under Ronald G. Prinn, the TEPCO Professor of Atmospheric Science, is working with research scientist Katherine Potter to build the first high-frequency climate observatory in all of Africa.

Once finished, the observatory will sit atop Mount Karisimbi, on the border between Rwanda and the Democratic Republic of Congo, at an elevation of nearly 15,000 feet. (Climate observatories are often built at high elevations so that researchers can cast a wider net, collecting data from a much larger surrounding region.) For now, it’s located at about half that elevation, on Mount Mugogo in Rwanda — making for more efficient work, since the hike up Karisimbi takes two days.

It’s a project that will fill a large hole in our current understanding of emissions of greenhouse gases — especially those coming from agricultural activities, wildfires, and deforestation. This will lead not only to better climate predictions, but also support regional and global climate-change mitigation strategies.

It’s also a highly personal project for Gasore, a citizen of Rwanda.

“We don’t know about African emissions, and we don’t have enough studies in Africa,” Gasore says. “It’s worth doing this study that has the potential to actually change people’s lives. It’s very gratifying to do research that actually affects people.”

Growing up in a village in southwestern Rwanda, Gasore used to watch the shadow cast by his house to predict when his mother would come home each day from her job as a schoolteacher — the first time he ever felt like he was really using science.

Gasore was also innately fascinating with how things worked: He was transfixed when he saw mechanics poking around car engines, and would stare as they struggled with the machinery.

“Even today I can watch road work, and tractors, for hours,” he says.

His father was trained as a nurse, but ran an electronics repair shop, fixing radios and televisions. Just from hanging around his father’s shop, a young Gasore learned about electronics by tinkering.

School wasn’t mandatory in Rwanda when Gasore was growing up, but his parents put a heavy emphasis on education for him and his five siblings. He learned to read French when he was 5, but didn’t attend school until he was 7. His father soon started to bring him books on computers and physics.

It just so happened that he had a knack for school — and for math, in particular. At the end of his primary schooling, Gasore was the best student in his district, and then placed third in a nationwide examination. He was awarded a scholarship to the National University of Rwanda, where he studied theoretical physics, graduating first in his class in 2007.

After finishing college, Gasore reached a crossroads. He stayed at the university and worked as a teaching assistant, but could feel himself growing disenchanted with the ethereal world of theoretical physics.

“When I finished I found that I wasn’t well connected with the real world,” he says. “I knew things, but couldn’t actually talk to people and tell them what I knew.”

Gasore was interested in climate science because it offered a mix of the theoretical and the practical. “I love using my theoretical knowledge on real-life problems,” he says.

Before long, an opportunity came knocking. Gasore was familiar with MIT, and the National University of Rwanda had partnerships with the Institute through OpenCourseWare and iLab. When Potter — now his colleague — came to visit Rwanda as part of her research, Gasore asked to meet her.

Potter was impressed with Gasore’s interests and intelligence, and advised him to apply to MIT. He did, and was accepted. The following fall, he moved to Boston.

Carving a path at MIT

Initially, Gasore was surprised by the freedom he found at MIT: “My previous school was sitting in a class and having someone teach you what to do. So I liked getting to choose what I got to study — to have 20 options for classes and to get to choose four.”

He quickly immersed himself in student opportunities surrounding his studies, joining the Weather Forecasting Team, the Joint Program on the Science and Policy of Global Change, and the Center for Global Change Science. Recently, he was also awarded a Martin Family Fellowship for Sustainability, which supports MIT graduate students in environmental studies.

Gasore realizes the importance of being able to talk to policymakers.

“Policy meetings are about climate-change mitigation and emissions abatement. So you have to talk in those terms,” he says. “I think the Center for Global Change Science is very strong in emphasizing strong mathematical skills, but also keeping in mind that we are doing this for policy.”

Above all, Gasore is passionate about his work: “I enjoy doing it. That’s the motivation. That’s why I can spend the night here in the lab troubleshooting,” he says. “There’s a reward when you spend five hours on something and then at the end you see it working and you say, ‘Wow.’ That’s what keeps me going.”