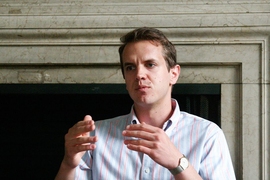 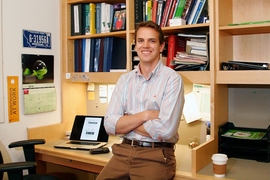 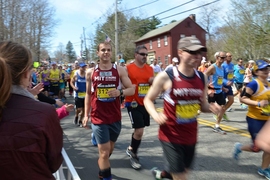 Joseph Azzarelli, a third-year MIT graduate student in chemistry, works on developing inexpensive, low-power chemical sensors — but the spark that set him on his scientific path has an unlikely source: a presentation on fly-fishing in a bookstore near Kankakee, Ill.

The speaker let Azzarelli, 9 years old at the time, practice casting a model fly rod in the store, and he was sold: “I was immediately captivated by the whole process,” Azzarelli says. He began saving money to buy a starter rod and learned to cast, fishing for largemouth bass and sunfish in the creeks and ponds around Kankakee.

By the time Azzarelli and his family moved from Illinois to Evergreen, Colo. — a fly-fishing mecca — when he was in the eighth grade, his interest had snowballed into full-blown obsession. He learned to tie flies, studied entomology, and combed through the vast literature on fly-fishing for trout. As a high-school freshman, he got a job at a fly shop in Evergreen called the Blue Quill Angler — “kind of like the MIT of fly-fishing shops,” Azzarelli says.

For Azzarelli, the sport shaped his approach to science. “Fly-fishing led me into this awareness of human impact on the environment, and that, in turn, led me into trying to learn about the science behind our impact,” Azzarelli says. “It really is a driving force for what I do now.”

A finger on the pulse

Today, Azzarelli is a student in the lab of Timothy Swager, the John D. MacArthur Professor of Chemistry at MIT, where he works on developing improved chemical sensors for environmental and agricultural applications. Current sensors often use “high-temperature, metal oxide surfaces at which chemical reactions occur,” Azzarelli says. But maintaining those temperatures — as hot as 400 degrees Celsius — can be a power sink.

Azzarelli’s research aims to develop passive sensors that can be treated as simple circuit components; for example, the presence of the sensed chemical might lead to a change in resistance. Furthermore, a new method of constructing the sensing components — essentially, a pencil lead that can simply be drawn into a circuit — could achieve vast increases in affordability.

Lower cost and higher efficiency could allow the introduction of large numbers of chemical sensors into applications that are currently prohibitive. Azzarelli uses an environmental survey of a watershed as an example: “Right now, you have to contract a third party to come out and take those measurements and conduct a comprehensive study … but the problem is that that comprehensive study might happen once a month, or once a year, or once a decade.”

“The idea is to have sensors that are so inexpensive that you could have a lot of them and you could be collecting the data more frequently,” Azzarelli says. “The more continuously you can have your finger on that pulse, the more you can start to make intelligent decisions about activities that may influence those environments.”

Unlike his singular obsession with fly-fishing, Azzarelli’s path to MIT has been more convoluted. His interest in graduate school emerged during an internship with Stephen Buchwald, the Camille Dreyfus Professor of Chemistry, after his sophomore year at Montana State University. “I really did like the process of rigorous scientific inquiry,” Azzarelli said.

After graduating from Montana State in 2010, Azzarelli was accepted to graduate school at MIT, but decided to defer for a year to do an internship at Pfizer. “That gave me a taste of the corporate world,” Azzarelli says. “I was fortunate to gain insight into how a large organization like Pfizer operates at the level of an R&D center.”

While Azzarelli was considering both academic and nonacademic careers, he also became fascinated by an entirely different concept: the idea of economic externalities, costs or benefits that are incurred by a party that didn’t choose them, such as air and water pollution. Azzarelli was unsure of his future path when Swager contacted him about a project: using sensors to detect ethylene, a byproduct of fruit ripening, in order to determine fruit ripeness, and therefore reduce food waste.

It was the perfect project, combining Azzarelli’s scientific, economic, and entrepreneurial interests. “It was an incredibly serendipitous meeting, and once we had that conversation, I said, ‘I definitely want to join your lab, and any way I can be involved in that project, please sign me up,’” he says.

The team was awarded an MIT Deshpande Innovation Grant for the project, which has since spun out into a company, C2Sense. Although Azzarelli is not part of the company, entrepreneurship, he says, is likely to be in his future. “To me a technology is not successful by getting into a high-impact paper, it’s not successful by having a lot of people tell you it’s really interesting,” he says. “It’s successful once people are using it and find it valuable.”

Given his wide array of interests, it’s unsurprising that Azzarelli is enticed by interdisciplinary work — such as a recent collaboration with Karen King, a professor at Harvard Divinity School. King approached the Swager lab with an ancient papyrus that addresses early Christian values on celibacy — a document that has received attention for its suggestion that Jesus had a wife. Azzarelli helped analyze the authenticity of the document using a process known as FT-IR spectroscopy, which revealed that the papyrus is homogeneous “old paper,” and probably does not reflect modern tampering.

At MIT, Azzarelli is the outgoing president of the MIT Science Policy Initiative, a group that focuses on how scientists and engineers can best inform policymakers to help create laws that are most beneficial to society. He was also part of the MIT Strong team, which ran the Boston Marathon in April to raise money for the Sean A. Collier Memorial Fund, which honors the MIT Police officer who was killed in the line of duty last year.

“I think that the Collier Fund is a way to have a remembrance in the right way,” Azzarelli says, “not, ‘Let’s forever be sad about this event,’ but rather, ‘Let’s forever celebrate the people who, like Sean Collier, go above and beyond to make their communities better places.’”