The science of networking 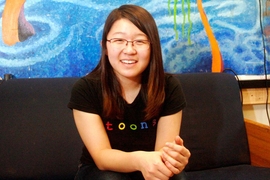 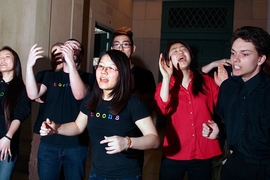 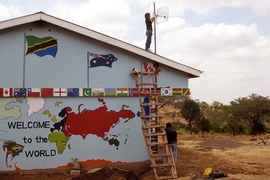 As she zips across campus on her kick scooter, traveling from class to lab to rehearsal with the MIT-Wellesley Toons a cappella group, MIT senior Esther Jang maximizes her time with her academics, research, and friends.

Jang came to MIT because of her interests in science and teaching. As a student at Hunter College High School in New York, Jang developed these interests while working in the school’s science lab. She would prepare experiments for science classes, and then present the setups to her peers before they began their lab work.

She had also read “The Idea Factory: Learning to Think at MIT,” by Pepper White SM ’84, in which the author recounts his experience as an MIT student. Jang says White’s description of the hacker culture greatly appealed to her as she considered attending MIT.

“Even though I had never done anything like that before, it philosophically appealed to me,” Jang says. “I started thinking about MIT as a place where people do things because they’re cool and because they can.”

As the May 1 enrollment deadline was approaching during her senior year, Jang was representing her high-school team at the 2010 National Science Bowl competition in Washington. She made her decision official after taking in the sites of the capital with some friends during a break in the competition.

“We were passing by the Jefferson Memorial, and I looked at its dome. I thought, ‘MIT has a dome. I think I want to go to MIT!’ I don’t know what that says about me,” she explains with a laugh.

Jang entered MIT with a strong interest in biology, and soon declared as a computer science and molecular biology major. The summer after her freshman year, she worked at the MIT Synthetic Biology Center with Timothy Lu, an assistant professor of electrical engineering, and Rahul Sarpeshkar, an associate professor of electrical engineering. There, she constructed genetic circuits in E. coli, a bacterium found in the lower intestine of people and animals. After spending her days in the lab, she nurtured her passion for teaching in the evenings by working with high-school students through the MIT Educational Studies Program.

In the fall, Jessica Fujimori, one of Jang’s classmates, returned to campus after a summer public service project in Tanzania. Fujimori had worked with the Orkeeswa Secondary School near Arusha, Tanzania, and recognized a need for a science teaching initiative she thought Jang would be perfect for.

Jang and Fujimori approached the MIT Public Service Center with their idea; advisors there suggested that the duo instead find a project that could build greater capacity for the school than a one-time teaching experience could. They turned to one of the organizers of the nonprofit that manages the Orkeeswa School; as part of their discussion, Jang suggested that she and Fujimori could deliver wireless Internet connectivity to the school so students and teachers could benefit from educational resources on the web. The nonprofit told her that while Internet connectivity would be welcome, the project probably was not feasible.

That was all the motivation Jang needed.

“I thought, ‘I have absolutely no idea how the Internet works or how I’m going to do this, but maybe I can just forget about all that,’” Jang says. “I also wanted to prove it to myself that I could do something I didn’t think was possible.”

By participating in an Undergraduate Research Opportunities Program (UROP) experience in MIT’s Research Laboratory of Electronics with Vincent Chan, the Joan and Irwin Jacobs Professor of Electrical Engineering and Computer Science, Jang prepared herself by learning more about network engineering. That summer, with support from the Class of 1978 PSC Fellowship Fund and the Baker Foundation, Jang and Fujimori trekked to Tanzania. Fujimori took the lead on developing a science lab, while Jang aimed to deliver the Internet access.

Jang’s original plan was to use two antennas and a relay modem to create a point-to-point link between the nearby town of Arusha and the Orkeeswa School. However, as she soon found out, the slow speed of the Internet coupled with the four-mile distance between the school and town made this plan impossible.

Instead she climbed on the roof of the school and pointed an antenna at a cell tower, making it a direct receiver of 3G service. After some initial testing with equipment on hand, she ordered USB modems and used large data-carrying cables to link the antenna with the modems. By connecting the modems to routers, the school finally had wireless Internet access for its new computer lab and other teaching spaces.

With the Internet connection in place, the teachers and students of the resource-strapped Orkeeswa School now have access to the global educational resources of the Web. The achievement was all the more remarkable in light of the fact that just a few months prior to her travels, Jang had little knowledge of networks and was told that Internet delivery would be highly unlikely.

In reflecting on the accomplishment, Jang is reminded of part of a Nikola Tesla quote: “I do not think there is any thrill that can go through the human heart like that felt by the inventor as he sees some creation of the brain unfolding to success.”

“I felt almost as if the direction of my life could change because of that moment,” Jang says. “When I got back, I was determined to continue working in development projects and continue helping people.”

Jang has used her senior year to further her international experiences. To fulfill her final humanities, arts, and social sciences (HASS) requirement, she is working on an independent study with Will Broadhead, an associate professor of history, to develop an interactive website mapping ancient Roman graffiti in Pompeii.

“Not many people know you can do HASS independent studies for credit if you propose your own project and get a professor to advise you,” she says.

After traveling to Italy in January to complete fieldwork, she returned to Tanzania to provide support for her Internet setup and to write extensive and easy-to-use documentation so the school can self-sustain the setup into the future. She also consulted with a nearby primary school that arranged a similar Internet setup using her instructions and documentation manual.

Having seen firsthand how networks can help people, Jang will stay at MIT next year to pursue her master’s of engineering in Chan’s networks lab. While she is surprised at how much her academic interests have evolved during four years at MIT, she is also surprised by how much being at MIT has developed her as a leader.

“After doing so many activities that required leadership and learning how to talk to people and work with people, I’ve realized that those kinds of interpersonal skills are so important in getting things done,” Jang says. “Somehow MIT has allowed me to develop these in a way I didn’t think would ever happen.”