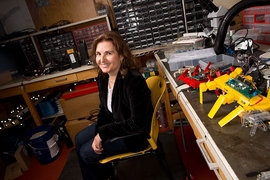 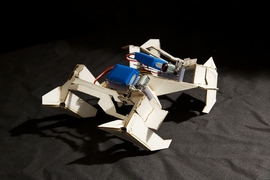 For years, a team of researchers at MIT and Harvard University has been working on origami robots — reconfigurable robots that would be able to fold themselves into arbitrary shapes.

In today’s issue of Science, they report their latest milestone: a robot, made almost entirely from parts produced by a laser cutter, that folds itself up and crawls away as soon as batteries are attached to it.

“The exciting thing here is that you create this device that has computation embedded in the flat, printed version,” says Daniela Rus, the Andrew and Erna Viterbi Professor of Electrical Engineering and Computer Science at MIT and one of the Science paper’s co-authors. “And when these devices lift up from the ground into the third dimension, they do it in a thoughtful way.”

Rus is joined on the paper by Erik Demaine, an MIT professor of computer science and engineering, and by three researchers at Harvard’s Wyss Institute for Biologically Inspired Engineering and School of Engineering and Applied Sciences: Sam Felton, Michael Tolley, and Rob Wood.

At the IEEE International Conference on Robotics and Automation this spring, Rus, Demaine, Wood, and five other researchers at MIT and Harvard presented a paper on bakable robots, which would self-assemble from laser-cut materials when uniformly heated. The new work is similar, but a network of electrical leads, rather than an oven or hot plate, delivers heat to the robot’s joints to initiate folding.

“That’s exciting from a geometry standpoint,” Demaine says, “because it lets us fold more things. Because we can do the sequencing, we have a lot more control. And it lets us make active folding structures. Instead of just self-assembly, you can then make it walk.”

The robot is built from five layers of materials, all cut according to digital specifications by a laser cutter. The middle layer is copper, etched into an intricate network of electrical leads. It’s sandwiched between two structural layers of paper; the outer layers are composed of a shape-memory polymer that folds when heated.

After the laser-cut materials are layered together, a microprocessor and one or more small motors are attached to the top surface. In the prototype, that attachment was done manually, but it could instead be performed by a robotic “pick and place” system.

“There is a magic sauce in the mechanical design that forms the leg system that can be actuated with one motor,” Rus says.

In fact, while the researchers experimented with both single-motor and four-motor designs, the Science paper reports a design that uses two motors. Each motor controls two of the robot’s legs; the motors are synchronized by the microprocessor. Each leg, in turn, has eight mechanical “linkages,” and the dynamics of the linkages convert the force exerted by the motor into movement.

“It’s called a one-degree-of-freedom structure, in which you just need to turn one crank and the whole thing moves in the way that you want,” Demaine explains. “It lets you transfer just one degree of freedom into a whole complicated motion, all through the mechanics of the structure.”

In prior work, Rus, Demaine, and Wood developed an algorithm that could automatically convert any digitally specified 3-D shape into an origami folding pattern. The design of the new robot was intended to demonstrate not only the possibility of motion generation, but also the ability to perform the two folds necessary to produce arbitrary shapes. “You need to be able to do a single fold, ideally all the way to 180 degrees, in both directions,” Demaine says. “Then the next level of challenge is to do what’s called a cyclic fold, where you have a bunch of panels connected together in a cycle, and they can all fold simultaneously. That’s demonstrated in one component of the system.”

The sharpest fold that the prototype system can execute is 150 degrees, not 180. But as Demaine explains, in origami, 180-degree folds are generally used to join panels together. With 150-degree folds, the panels won’t quite touch, but that’s probably tolerable for many applications.

In the meantime, Demaine is planning to revisit the theoretical analysis that was the basis of the researchers’ original folding algorithm, to determine whether it’s still possible to produce arbitrary three-dimensional shapes with folds no sharper than 150 degrees.

“It’s very exciting because there is always work to be done between theory and devices,” Rus says. “I make robots and love theory, and Erik proves theorems and loves mechanisms. In order for this research to work, you need people who are of the same mind about what is important.”

“This is the first time where they’ve self-folded such a complicated robotic structure,” says Ronald Fearing, a professor of electrical engineering and computer science at the University of California at Berkeley, who has been following the MIT and Harvard researchers’ work. “Because they build it with the electronics on first, you can now choose which folds occur when. If you don’t have the electronics, then you’re limited to patterns where you heat up the whole thing and everything folds at once. So being able to do the timed sequence is a nice capability.”

Origami robotics is “a pretty powerful concept, because cutting planar things and folding is an inherently very low-cost process,” Fearing says. “If you have a hollow-shell structure, then you have something that is very strong and very lightweight. If you put motors on there, you end up with a robot that is very powerful for its weight, so you start to be able to take advantage of things like you see with insects carrying so many times their weight. Folding, I think, is a good way to get to the smaller robots.”

The work was funded by the National Science Foundation, the Wyss Institute for Biologically Inspired Research at Harvard, and the Air Force Office of Scientific Research.

Drake Bennett of Bloomberg Businessweek reports on how a team of researchers from MIT and Harvard have created a robot that can self-assemble from a flat sheet of paper in four minutes. The robot is made of paper, and layered with a circuit board and prestretched polystyrene, the same material used to create Shrinky Dinks, Bennett explains.

Bloomberg Businessweek spotlights the new self-folding, mobile robot developed by MIT and Harvard researchers. The design for the robot was inspired by origami and the team used inexpensive and easily accessible materials to build the robot, Bloomberg reports.

Joseph Flaherty of Wired takes a close look at the design of MIT’s self-assembling robots. “[T]hese researchers are promoting a new kind of manufacturing where engineers can elegantly specify a design and watch it spring to life like a seed emerging from the ground,” writes Flaherty.

“Researchers at MIT and Harvard said that they achieved a landmark feat of engineering by creating a sophisticated machine—and doing so inexpensively and quickly—that has the ability to autonomously interact with its environment,” Kevin Conlon and Leigh Remizowski of CNN report.

Megan Turchi of Boston.com writes about the new autonomous, self-assembling robots designed by researchers from MIT and Harvard. The robots can fold themselves into mobile structures that are then able to move independently.

Writing for BetaBoston, Nidhi Subbaraman reports on the self-assembling robot, made of inexpensive materials, developed by researchers from MIT and Harvard. This research demonstrates the potential to make robots easily accessible and affordable for the general population, Prof. Daniela Rus explains.

Wired reporter Katie Collins writes about the new self-assembling, mobile robot developed by MIT and Harvard researchers. “It takes only four minutes for the robot to fold itself up, after which it can walk away with no human intervention,” writes Collins.

Carolyn Johnson of The Boston Globe writes about the self-folding robots designed by a team from MIT and Harvard. “The question is, can we develop the tools that will allow us to automatically and rapidly generate one robot for any task?” says Professor Daniela Rus.

Seth Borenstein of the Associated Press reports on the mobile, self-assembling robot developed by MIT and Harvard researchers. "This is a simple, flexible and rapid design process and a step toward the dream of realizing the vision of 24-hour robot manufacturing," explains Prof. Daniela Rus.

In a piece for USA Today, Hoai-Tran Bui writes about how a team of researchers from MIT and Harvard have developed a robot that can self-assemble from a flat sheet of paper in minutes. "The big dream is to make robots fast and inexpensive," says Prof. Daniela Rus.

Brooks Hays writes for United Press International about the self-folding robots created by researchers from MIT and Harvard. "The exciting thing here is that you create this device that has computation embedded in the flat, printed version," explains Prof. Daniela Rus.

Joe Kloc of Newsweek writes about how MIT and Harvard scientists have developed a self-assembling robot that folds itself into a 3-D robot capable of movement. "We have achieved a long-standing personal goal to design a machine that can assemble itself," says Prof. Daniela Rus of the project.

Robert Lee Hotz of The Wall Street Journal writes that researchers from MIT and Harvard have developed of prototype of a, “flexible, self-assembling machine.” Potential applications for the technology include everything from self-assembling satellites to shape-shifting search-and-rescue robots.

Robert Lee Hotz reports for The Wall Street Journal on the new self-assembling robot developed by researchers from MIT and Harvard. The robot can transform from a flat sheet of paper into a mobile robot in four minutes, and the technique has applications in everything from self-assembling satellites to shape-shifting robots for search-and-rescue operations, Hotz reports.

Slate reporter Boer Deng writes about the self-assembling robot developed by scientists from MIT and Harvard. The robot, “forms itself, Transformer-like, from a flat sheet into a four-legged creature that crawls,” Deng writes.