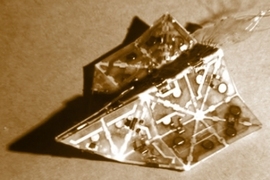 ↓ Download Image
Caption: Studded with magnets and electronic muscles known as actuators, a prototype robot developed at MIT can automatically fold itself into an airplane or an origami boat.

Caption:
Studded with magnets and electronic muscles known as actuators, a prototype robot developed at MIT can automatically fold itself into an airplane or an origami boat.

By combining origami and electrical engineering, researchers at MIT and Harvard are working to develop the ultimate reconfigurable robot — one that can turn into absolutely anything. The researchers have developed algorithms that, given a three-dimensional shape, can determine how to reproduce it by folding a sheet of semi-rigid material with a distinctive pattern of flexible creases. To test out their theories, they built a prototype that can automatically assume the shape of either an origami boat or a paper airplane when it receives different electrical signals. The researchers reported their results in the July 13 issue of the Proceedings of the National Academy of Sciences.

As director of the Distributed Robotics Laboratory at the Computer Science and Artificial Intelligence Laboratory (CSAIL), Professor Daniela Rus researches systems of robots that can work together to tackle complicated tasks. One of the big research areas in distributed robotics is what’s called “programmable matter,” the idea that small, uniform robots could snap together like intelligent Legos to create larger, more versatile robots.

The U.S. Defense Department’s Defense Advanced Research Projects Agency (DARPA) has a Programmable Matter project that funds a good deal of research in the field and specifies “particles … which can reversibly assemble into complex 3D objects.” But that approach turns out to have drawbacks, Rus says. “Most people are looking at separate modules, and they’re really worried about how these separate modules aggregate themselves and find other modules to connect with to create the shape that they’re supposed to create,” Rus says. But, she adds, “actively gathering modules to build up a shape bottom-up, from scratch, is just really hard given the current state of the art in our hardware.”

So Rus has been investigating alternative approaches, which don’t require separate modules to locate and connect to each other before beginning to assemble more complex shapes. Fortunately, also at CSAIL is Erik Demaine, who joined the MIT faculty at age 20 in 2001, becoming the youngest professor in MIT history. One of Demaine’s research areas is the mathematics of origami, and he and Rus hatched the idea of a flat sheet of material with tiny robotic muscles, or actuators, which could fold itself into useful objects. In principle, flat sheets with flat actuators should be much easier to fabricate than three-dimensional robots with enough intelligence that they can locate and attach to each other.

About a year ago, Demaine and several colleagues — including his dad, who’s a visiting scientist at CSAIL, master’s student Aviv Ovadya, and Nadia Benbernou, a PhD student in applied mathematics who’s a co-author on the new paper — proved that a large enough sheet creased in what’s called the “box pleat pattern” could be folded into a close approximation of any possible three-dimensional shape. The box pleat pattern divides the sheet into squares, each of which has a diagonal crease across it; but if two squares share an edge, their diagonal creases are mirror images. This paper marked the first time that the universality of a crease pattern had been shown, although Demaine and his collaborators have since proved that other crease patterns are universal as well.

Based on this result, Demaine, Rus, Harvard’s Robert Wood, and others developed algorithms that, given an arbitrary three-dimensional shape, could generate a sequence of folds that would produce it from a box-pleated sheet.

But as yet, no robotic system existed that could execute that sequence of folds automatically. In principle, a universal origami robot would have actuators on both sides of every crease, so that the sheet could fold in either direction at any point. But a system that complex is difficult to build, and before undertaking it, the researchers hoped to demonstrate the viability of their approach.

So they designed yet another set of algorithms that, given sequences of folds for several different shapes, would determine the minimum number of actuators necessary to produce all of them. Then they set about building a robot that could actually assume multiple origami shapes. Their prototype, made from glass-fiber and hydrocarbon materials, with an elastic plastic at the creases, is divided into 16 squares about a centimeter across, each of which is further divided into two triangles. The actuators consist of a shape-memory alloy — a metal that changes shape when electricity is applied to it. Each triangle also has a magnet in it, so that it can attach to its neighbors once the right folds have been performed.

The sheet is too small — or, depending on your perspective, the triangles are too big — to do anything very useful yet. But, in principle, it’s possible to build either a similar sheet with much smaller moving parts, or a larger sheet with similar-sized moving parts. With a finer-grained sheet, “you could imagine downloading the new iPhone,” Demaine says. “In the same way that you download the latest CD from your favorite artist totally electronically, you could imagine downloading shapes electronically, and programming hardware the same way you program software.” Larger sheets could enable “a tent that can adapt its shape according to the wind so that it doesn’t blow over,” Demaine says, or “a solar cell that can adjust its shape to the sun and the cloud patterns and whatnot.”

“It’s a very nice merger of the abstract mathematical theory and the practical world,” says Joseph O’Rourke, the chair of the computer science department at Smith College, who was one of the referees for the PNAS paper. “It may be appropriate to say it’s some type of breakthrough.” O’Rourke points out, however, that Demaine’s universality proof relied on the assumption that the triangles in the box-pleated material were themselves somewhat flexible, which may not be the case with, for instance, tiny sheets of material carved out of silicon.

Demaine agrees but says that he and his group are approaching the problem from two directions. On one hand, they’re trying to mathematically model the flexibility of the triangles, so that the folding algorithms can take that into account. On the other, they’re taking some tentative first steps toward a theory of origami with rigid materials. “We are sorely lacking in rigid-origami theory, as Joe points out and I'd be quick to agree,” Demaine says.