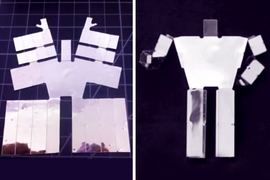 Printable robots — those that can be assembled from parts produced by 3-D printers — have long been a topic of research in the lab of Daniela Rus, the Andrew and Erna Viterbi Professor of Electrical Engineering and Computer Science at MIT.

At this year’s IEEE International Conference on Robotics and Automation, Rus’ group and its collaborators introduce a new wrinkle on the idea: bakable robots.

In two new papers, the researchers demonstrate the promise of printable robotic components that, when heated, automatically fold into prescribed three-dimensional configurations.

One paper describes a system that takes a digital specification of a 3-D shape — such as a computer-aided design, or CAD, file — and generates the 2-D patterns that would enable a piece of plastic to reproduce it through self-folding.

The other paper explains how to build electrical components from self-folding laser-cut materials. The researchers present designs for resistors, inductors, and capacitors, as well as sensors and actuators — the electromechanical “muscles” that enable robots’ movements.

“We have this big dream of the hardware compiler, where you can specify, ‘I want a robot that will play with my cat,’ or ‘I want a robot that will clean the floor,’ and from this high-level specification, you actually generate a working device,” Rus says. “So far, we have tackled some subproblems in the space, and one of the subproblems is this end-to-end system where you have a picture, and at the other end, you have an object that realizes that picture. And the same mathematical models and principles that we use in this pipeline we also use to create these folded electronics.”

Both papers build on previous research that Rus did in collaboration with Erik Demaine, another professor of computer science and engineering at MIT. This work explored how origami could be adapted to create reconfigurable robots.

The key difference in the new work, explains Shuhei Miyashita, a postdoc in Rus’ lab and one of her co-authors on both papers, is a technique for precisely controlling the angles at which a heated sheet folds. Miyashita sandwiches a sheet of polyvinyl chloride (PVC) between two films of a rigid polyester riddled with slits of different widths. When heated, the PVC contracts, and the slits close. Where edges of the polyester film press up against each other, they deform the PVC.

Imagine, for instance, a slit in the top polyester film and another parallel to it in the bottom film. But suppose, too, that the slit in the top film is narrower than that on the bottom. As the PVC contracts, the edges of the top slit will press against each other, but there will still be a gap between the edges of the bottom slit. The entire sheet will then bend downward until the bottom edges meet as well. The final angle is a function of the difference in the widths of the top and bottom slits.

But producing the pattern of slits is not as simple as just overlaying them on an origami crease pattern and adjusting the widths accordingly, Rus says. “You’re doing this really complicated global control that moves every edge in the system at the same time,” she says. “You want to design those edges in such a way that the result of composing all these motions, which actually interfere with each other, leads to the correct geometric structure.”

ByoungKwon An, another of Rus’ students, is lead author on the paper describing the system for interpreting 3-D images. He’s joined by Rus, Miyashita, Demaine, and five other researchers both at MIT and in the lab of professor Robert Wood at Harvard University.

In that paper, the researchers describe using a polyester coated with aluminum to create foldable electronic components. Miyashita designed those components by hand, since it was necessary to prescribe not just their geometric properties but also their electrical properties. The sensor Miyashita designed looks kind of like a small accordion. Each of the accordion folds contains a separate resistor, and when the folds are compressed, the total resistance changes proportionally, with a measurable effect on a current passing through the sensor. 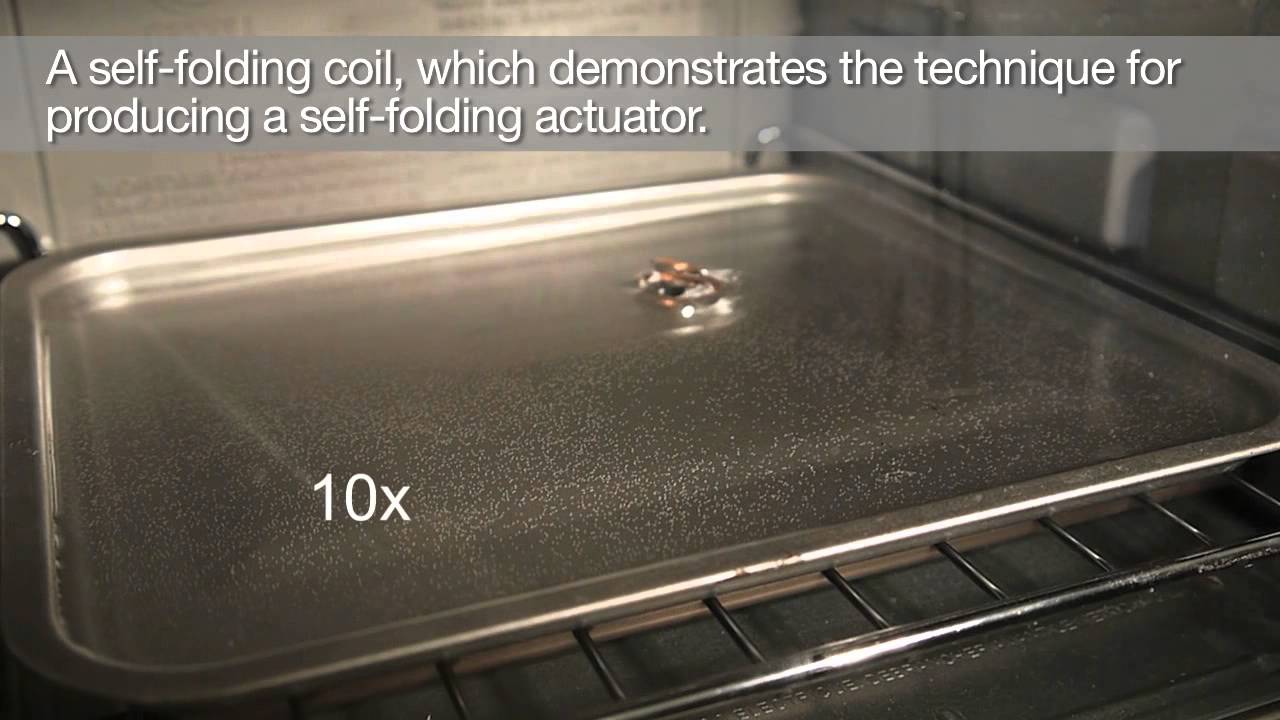 The actuator — which would enable a robot to move — is a foldable coil, which would need to be augmented with a pair of iron cylinders that could be magnetized by an electrical current. Aluminum isn’t a good enough conductor to yield an actuator that exerts much force, but a copper-coated polyester should do the trick.

In a piece for Wired, Olivia Solon writes about how Professor Daniela Rus’ research group has developed, “a system of 2D patterns cut into plastic that can self-fold under heat into 3D shapes.”

New Scientist writer Aviva Rutkin reports that MIT researchers have developed a new process in which flat cut-outs are able to self-assemble into robots when heated. "What we would like is to provide design tools that allow people who are not experts to create their own machines," explains Prof. Daniela Rus.

“When it comes out of the 3D printer, the robot is just a sheet made of a polymer called polyvinyl chloride, or PVC. The sheet is sandwiched between two rigid polyester films. Slits cut into the films affect how the PVC sheet will fold when it is heated,” writes UPI reporter Brooks Hays of new work with self-assembling robots.

Forbes reporter Jasper Hamill describes a new technique developed by Prof. Daniela Rus that allows robots to self-assemble when heated. “The components can be produced simply by heating up the plastic, which is cleverly designed so it folds itself into the right form,” writes Hamill.

“Eventually she can see a world where people can use an algorithm to analyze an image, create blueprints and print out fully functional robots. This could be a big deal in manufacturing, health care and, yes, toys,” writes NBC News writer Keith Wagstaff of Professor Daniela Rus’ work with self-assembling robots.