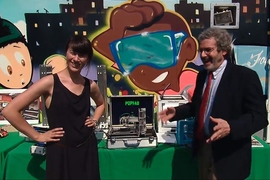 MIT’s Mobile Fab Lab — a trailer containing digital fabrication, design, and manufacturing tools, along with an electronics workbench — was on hand Wednesday for the first-ever “White House Maker Faire,” hosted by President Obama and the Office of Science and Technology Policy (OSTP) at the White House.

The colorful mobile factory, a blue biofuel-powered sports car, and an electronic giraffe were along the exhibits displayed on the South Lawn, in addition to more than 30 exhibits on display inside the White House — representing a total of more than 100 “makers” whose work ranged from whimsical to practical.

At the Maker Faire, President Barack Obama met with students, entrepreneurs, and citizens who are using new fabrication tools and techniques to launch businesses; learn skills in science, technology, engineering, and math (STEM); and reinvigorate American manufacturing. Before an audience that included business leaders, mayors, and heads of nonprofit organizations, the president announced new steps the administration and its partners will take to support Americans’ access to these tools and techniques, and proclaimed the day as a “National Day of Making.”

The Mobile Fab Lab — a graffiti-decorated trailer — was among MIT’s contributions to the daylong celebration of making, innovation, and creativity. The trailer is a mobile fabrication laboratory that contains a suite of digital fabrication design and manufacturing tools and a full electronics workbench, allowing anyone to make (almost) anything.

Obama stopped by the Mobile Fab Lab for a briefing on digital fabrication and the future of manufacturing with Neil Gershenfeld, director of MIT’s Center for Bits and Atoms (CBA); Nadya Peek, one of his graduate students, who is working on machines that make machines; and Makeda Stephenson, from Boston’s first fab lab. Visitors to the lab included John Holdren, assistant to the president for science and technology and director of the OSTP, and two physicists who serve in Congress: Reps. Rush Holt (D-N.J.) and Bill Foster (D-Ill.), who has introduced a House bill to charter a national network of fab labs based on CBA’s fab labs.

MIT was well represented during Wednesday’s event: Jose Gomez-Marquez, an instructor and research specialist at MIT's International Design Center and Little Devices Lab, presented on the MakerNurse project, which aims to connect creative nurses from across the country and provide prototyping tools to support nurse-led ideas for new medical devices. Sandra Richter, a visiting researcher at the MIT Media Lab, met with Obama as he tried out her solar-powered charging bench in the Rose Garden. Gershenfeld’s former student Manu Prakash SM ’05, PhD ’08 showed the president a $5 chemistry set for kids and an origami-based paper microscope that costs less than $1; alumni Jay Silver SM ’08 and Saul Griffith SM ’01, PhD ’04 were also on hand.

The Mobile Fab Lab is part of a global educational outreach project based at the Center for Bits and Atoms. The mobile facilities are technical platforms for STEM education, workforce development, and business-idea prototyping.

CBA, founded in 2001 with support from the National Science Foundation, is an interdisciplinary initiative exploring the boundary between computer science and physical science. CBA studies how to turn data into things, and things into data. It manages facilities, runs research programs, supervises students, works with sponsors, creates startups, and conducts public outreach and educational projects.

CBA’s involvement in the Maker Faire builds on a workshop, run last year with OSTP, on the emerging science of digital fabrication, where both materials and designs are digitized. CBA’s research and facilities on campus are complemented by its fab labs, which bring rapid-prototyping capabilities to underserved communities. While originally intended for outreach, fab labs are also used by entrepreneurs to develop businesses, and have increasingly been adopted by schools as platforms for project-based, hands-on STEM education: By designing and creating objects of personal interest, students learn about the machines, materials, design process, and engineering that goes into invention and innovation.

With the rapid growth of the “maker movement” — a rising culture emphasizing do-it-yourself hardware and technology — fab labs are growing in prominence as a component of entrepreneurship and of developing the nation’s future workforce and its capacity for advanced manufacturing.

The first fab lab was deployed by MIT faculty and students in rural India in 2002. Since then, similar facilities have been placed in Norway, South Africa, Ghana, Kenya, Iceland, Australia, Japan, New Zealand, Europe, the United States, and elsewhere — building a global community of people who want to collaborate and share knowledge. Today there are more than 380 fab labs in the world, with at least an equal number under development in more than 40 countries.

To keep up with the growth of this international network, in 2009 CBA spun off the Fab Foundation, to provide operational support for the program, and a Fab Academy for distributed education in the labs. CBA continues to collaborate with partners on establishing new fab lab sites.

At this week’s White House Maker Faire, Obama announced a number of commitments by agencies, corporations, and cities and states to the maker movement, and to support innovation and STEM education. One of those commitments came from Chevron Corp., which announced a $10 million grant to the Fab Foundation to build fab labs in areas of the United States where it operates.