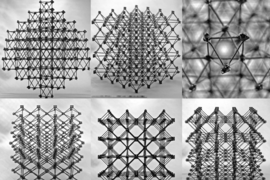 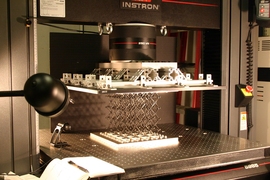 ↓ Download Image
Caption: In the lab, a sample of the cellular composite material is prepared for testing of its strength properties.
Credits: Photo courtesy of Kenneth Cheung

MIT researchers have developed a lightweight structure whose tiny blocks can be snapped together much like the bricks of a child’s construction toy. The new material, the researchers say, could revolutionize the assembly of airplanes, spacecraft, and even larger structures, such as dikes and levees.

The new approach to construction is described in a paper appearing this week in the journal Science, co-authored by postdoc Kenneth Cheung and Neil Gershenfeld, director of MIT’s Center for Bits and Atoms.

Gershenfeld likens the structure — which is made from tiny, identical, interlocking parts — to chainmail. The parts, based on a novel geometry that Cheung developed with Gershenfeld, form a structure that is 10 times stiffer for a given weight than existing ultralight materials. But this new structure can also be disassembled and reassembled easily — such as to repair damage, or to recycle the parts into a different configuration.

The individual parts can be mass-produced; Gershenfeld and Cheung are developing a robotic system to assemble them into wings, airplane fuselages, bridges or rockets — among many other possibilities.

The new design combines three fields of research, Gershenfeld says: fiber composites, cellular materials (those made with porous cells) and additive manufacturing (such as 3-D printing, where structures are built by depositing rather than removing material).

With conventional composites — now used in everything from golf clubs and tennis rackets to the components of Boeing’s new 787 airplane — each piece is manufactured as a continuous unit. Therefore, manufacturing large structures, such as airplane wings, requires large factories where fibers and resins can be wound and parts heat-cured as a whole, minimizing the number of separate pieces that must be joined in final assembly. That requirement meant, for example, Boeing’s suppliers have had to build enormous facilities to make parts for the 787.

Pound for pound, the new technique allows much less material to carry a given load. This could not only reduce the weight of vehicles, for example — which could significantly lower fuel use and operating costs — but also reduce the costs of construction and assembly, while allowing greater design flexibility. The system is useful for “anything you need to move, or put in the air or in space,” says Cheung, who will begin work this fall as an engineer at NASA’s Ames Research Center. 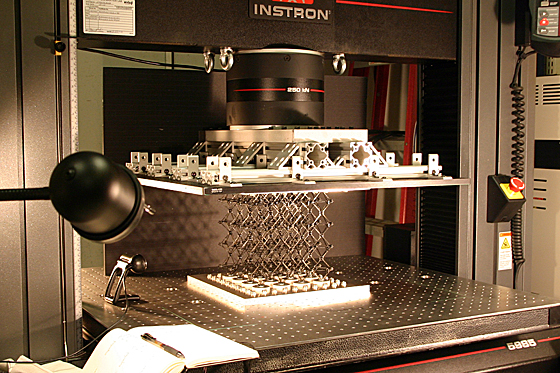 In the lab, a sample of the cellular composite material is prepared for testing of its strength properties. Photo courtesy of Kenneth Cheung

The concept, Gershenfeld says, arose in response to the question, “Can you 3-D print an airplane?” While he and Cheung realized that 3-D printing was an impractical approach at such a large scale, they wondered if it might be possible instead to use the discrete “digital” materials that they were studying.

“This satisfies the spirit of the question,” Gershenfeld says, “but it’s assembled rather than printed.” The team is now developing an assembler robot that can crawl, insectlike, over the surface of a growing structure, adding pieces one by one to the existing structure.

In traditional composite manufacturing, the joints between large components tend to be where cracks and structural failures start. While these new structures are made by linking many small composite fiber loops, Cheung and Gershenfeld show that they behave like an elastic solid, with a stiffness, or modulus, equal to that of much heavier traditional structures — because forces are conveyed through the structures inside the pieces and distributed across the lattice structure.

What’s more, when conventional composite materials are stressed to the breaking point, they tend to fail abruptly and at large scale. But the new modular system tends to fail only incrementally, meaning it is more reliable and can more easily be repaired, the researchers say. “It’s a massively redundant system,” Gershenfeld says.

Cheung produced flat, cross-shaped composite pieces that were clipped into a cubic lattice of octahedral cells, a structure called a “cuboct” — which is similar to the crystal structure of the mineral perovskite, a major component of Earth’s crust. While the individual components can be disassembled for repairs or recycling, there’s no risk of them falling apart on their own, the researchers explain. Like the buckle on a seat belt, they are designed to be strong in the directions of forces that might be applied in normal use, and require pressure in an entirely different direction in order to be released.

The possibility of linking multiple types of parts introduces a new degree of design freedom into composite manufacturing. The researchers show that by combining different part types, they can make morphing structures with identical geometry but that bend in different ways in response to loads: Instead of moving only at fixed joints, the entire arm of a robot or wing of an airplane could change shape.

Alain Fontaine, who directs the innovation program for aircraft manufacturer Airbus, says this new approach to building structures “is really disruptive. It opens interesting opportunities in the way to design and manufacture aerostructures.” These technologies, he says, “can open the door to other opportunities” and have significant potential to lower manufacturing costs.

In addition to Gershenfeld and Cheung, the project included MIT undergraduate Joseph Kim and alumna Sarah Hovsepian (now at NASA’s Ames Research Center). The work was supported by the Defense Advanced Research Projects Agency and the sponsors of the Center for Bits and Atoms, with Spirit Aerosystems collaborating on the composite development.