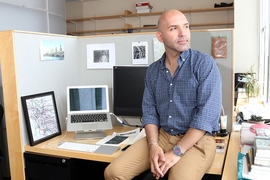 Caption:
John Arroyo conducting research about art, culture, and civic space at the historic confluence of the Los Angeles River and the Arroyo Seco in Northeast Los Angeles.

Yet despite the river’s hard-knock appearance, it has been a center of creative expression for artists. When Arroyo left Los Angeles in 2008 to pursue a master’s in city planning at MIT, he continued looking critically at the river as a new paradigm of urban planning.

“Although my community saw relatively little promise in the river’s ecological future, they saw great potential in its ability to elicit cultural engagement,” Arroyo wrote in the preface to his 2010 thesis, “Culture in Concrete: Art and the Re-imagination of the Los Angeles River as Civic Space.”

Today Arroyo is a doctoral student and Ford Foundation Predoctoral Fellow in MIT’s Department of Urban Studies and Planning (DUSP). A self-described “nontraditional” urban planner, his work before grad school as a journalist and as a longtime arts advocate has encouraged him to incorporate methods from ethnography, sociology, and critical cartography into his research.

“At a very basic level, it’s recognizing that there are different specific physical, social, and cultural needs that planners, designers, and policymakers must pay attention to,” Arroyo says. “It’s not a one-size-fits-all sort of situation.”

For planners to accommodate diversity, they need to understand the people they’re planning for. That’s where Arroyo’s research — which has involved Mexican immigrants from urban and rural environments, and even transient populations of Mexican immigrants who are so closely tied to their homes that their communities become campaign stops for Mexican politicians — comes in.

This means, he says, that planners should take greater care to understand the needs and wants of various groups before actually planning for them. Arroyo’s research has revealed how transnational Mexican migration has dramatically influenced the built environment on both sides of the border — something he calls “place bilingualism.”

Existing streams of thought often assume, he says, that Mexican immigrants all want the same things, and the same civic environments. “And my research is saying, ‘I don’t know if we can say that,’” Arroyo says. “Do people want public spaces that remind them of their place of origin? Which physical dimensions of their lives in the U.S. do they export back to Mexico? When and how do people develop a sense of agency, or become complacent, when faced with a radically different built environment, compared to what was previously familiar?

“Before we’re reactive, I’d like to be proactive so that we know what we don’t know,” Arroyo adds. “It requires a fundamental change, behaviorally, in the way planners work. People are living in the city; plans and policies should be dictated by them, especially when it comes to the built environment. That can be scary for a planner who’s used to having control.”

John Arroyo conducts an interview about the hybrid spatial effects of Mexican immigration and repatriation in Guanajuato, Mexico.
Courtesy of John Arroyo

A typical streetscape in East L.A., Arroyo’s native community and one of the most historic Mexican immigrant gateway communities in the United States.

A typical colonial streetscape in Guanajuato, a region with one of the most established transnational migration patterns between Mexico and the United States.

Much of the inspiration for Arroyo’s research comes from his personal experiences. By the time he entered high school, he realized that the name of his unincorporated East Los Angeles neighborhood provoked a reaction in people.

It was a neighborhood that some might call “tough” or “blighted”; Arroyo calls it “underresourced.” He lived with his family in a small two-bedroom house that accommodated up to 20 people during the agricultural season, when relatives migrated from central Mexico to work transient jobs picking strawberries and oranges. Gang violence often kept Arroyo indoors; when he did get out, he found a concrete environment with few parks and little greenery.

Yet despite its imperfections, Arroyo was infatuated by his neighborhood. He attended Loyola High, a top-ranked Jesuit school that attracted students from all over Los Angeles; for many classmates, Arroyo’s neighborhood was just a place they heard mentioned on the news. One message about his humble upbringing was drilled into his head over and over, he says: “All you need to do is get out. When you get the opportunity, just go and never look back.”

“I didn’t necessarily agree with that,” Arroyo says. He loved the vibrant Mexican community, and the artistic and culinary cultures. He decided to attend the University of Southern California as an undergraduate so that he could stay in Los Angeles and look more closely at “troubled” neighborhoods. “Was L.A. really as bad as everyone said?” he asks. “Or was it really much better, filled with lots of potential?”

Not just on paper

“A lot of planning schools have become policy schools. They’re disconnected from design,” Arroyo says. “MIT is so applied. You don’t have to lose sight of how both policy and design affect professional practice. Not only do you not have to — you should not.”

Arroyo has stayed on the front lines of urban arts culture and advocacy. He has worked with the Los Angeles Urban Rangers, a group of artists and advocates who lead tours showcasing some of the city’s lesser-known natural and urban features. He has also worked with an MIT group called the Community Innovators Lab (CoLab), which showcases research by DUSP students in an informal, applied manner via CoLab Radio. Many of the projects he’s worked on for CoLab — capturing soundscapes in European cities, or interviewing longtime residents of Los Angeles’ Skid Row — return him to his journalistic roots.

“Someone once asked: ‘Are you a journalist, or are you a planner?’” Arroyo says. “After I came to MIT, I wondered, ‘Why can’t I be both?’ Storytelling has such a major purpose in what we’re doing.”

It seems fitting that Arroyo’s latest project has returned him to Los Angeles and its eponymous river. Known as Play the LA River, it was started by Project 51, a group of artists and scholars whose goal is to inspire civic engagement with the river. Starting this September, the collective will hold events large and small to draw people to sites all along the river. In June, Project 51 was awarded a $185,500 grant by ArtPlace America, building upon funding from a number of other organizations, including the University of California Humanities Research Institute.

Are we purging the poorest?