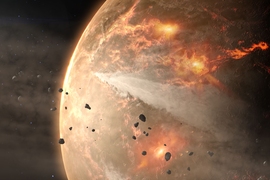 Today’s atmosphere likely bears little trace of its primordial self: Geochemical evidence suggests that Earth’s atmosphere may have been completely obliterated at least twice since its formation more than 4 billion years ago. However, it’s unclear what interplanetary forces could have driven such a dramatic loss.

Now researchers at MIT, Hebrew University, and Caltech have landed on a likely scenario: A relentless blitz of small space rocks, or planetesimals, may have bombarded Earth around the time the moon was formed, kicking up clouds of gas with enough force to permanently eject small portions of the atmosphere into space.

Tens of thousands of such small impacts, the researchers calculate, could efficiently jettison Earth’s entire primordial atmosphere. Such impacts may have also blasted other planets, and even peeled away the atmospheres of Venus and Mars.

In fact, the researchers found that small planetesimals may be much more effective than giant impactors in driving atmospheric loss. Based on their calculations, it would take a giant impact — almost as massive as the Earth slamming into itself — to disperse most of the atmosphere. But taken together, many small impacts would have the same effect, at a tiny fraction of the mass.

Hilke Schlichting, an assistant professor in MIT’s Department of Earth, Atmospheric and Planetary Sciences, says understanding the drivers of Earth’s ancient atmosphere may help scientists to identify the early planetary conditions that encouraged life to form.

“[This finding] sets a very different initial condition for what the early Earth’s atmosphere was most likely like,” Schlichting says. “It gives us a new starting point for trying to understand what was the composition of the atmosphere, and what were the conditions for developing life.”

Schlichting and her colleagues have published their results in the journal Icarus.

The group examined how much atmosphere was retained and lost following impacts with giant, Mars-sized and larger bodies and with smaller impactors measuring 25 kilometers or less — space rocks equivalent to those whizzing around the asteroid belt today.

The team performed numerical analyses, calculating the force generated by a given impacting mass at a certain velocity, and the resulting loss of atmospheric gases. A collision with an impactor as massive as Mars, the researchers found, would generate a shockwave through the Earth’s interior, setting off significant ground motion — similar to simultaneous giant earthquakes around the planet — whose force would ripple out into the atmosphere, a process that could potentially eject a significant fraction, if not all, of the planet’s atmosphere.

However, if such a giant collision occurred, it should also melt everything within the planet, turning its interior into a homogenous slurry. Given the diversity of noble gases like helium-3 deep inside the Earth today, the researchers concluded that it is unlikely that such a giant, core-melting impact occurred.

Instead, the team calculated the effects of much smaller impactors on Earth’s atmosphere. Such space rocks, upon impact, would generate an explosion of sorts, releasing a plume of debris and gas. The largest of these impactors would be forceful enough to eject all gas from the atmosphere immediately above the impact’s tangent plane — the line perpendicular to the impactor’s trajectory. Only a fraction of this atmosphere would be lost following smaller impacts.

To completely eject all of Earth’s atmosphere, the team estimated, the planet would need to have been bombarded by tens of thousands of small impactors — a scenario that likely did occur 4.5 billion years ago, during a time when the moon was formed. This period was one of galactic chaos, as hundreds of thousands of space rocks whirled around the solar system, frequently colliding to form the planets, the moon, and other bodies.

“For sure, we did have all these smaller impactors back then,” Schlichting says. “One small impact cannot get rid of most of the atmosphere, but collectively, they’re much more efficient than giant impacts, and could easily eject all the Earth’s atmosphere.”

However, Schlichting realized that the sum effect of small impacts may be too efficient at driving atmospheric loss. Other scientists have measured the atmospheric composition of Earth compared with Venus and Mars. These measurements have revealed that while each planetary atmosphere has similar patterns of noble gas abundance, the budget for Venus is similar to that of chondrites — stony meteorites that are primordial leftovers of the early solar system. Compared with Venus, Earth’s noble gas budget has been depleted 100-fold.

Schlichting realized that if both planets were exposed to the same blitz of small impactors, Venus’ atmosphere should have been similarly depleted. She and her colleagues went back over the small-impactor scenario, examining the effects of atmospheric loss in more detail, to try and account for the difference between the two planets’ atmospheres.

Based on further calculations, the team identified an interesting effect: Once half a planet’s atmosphere has been lost, it becomes much easier for small impactors to eject the rest of the gas. The researchers calculated that Venus’ atmosphere would only have to start out slightly more massive than Earth’s in order for small impactors to erode the first half of the Earth’s atmosphere, while keeping Venus’ intact. From that point, Schlichting describes the phenomenon as a “runaway process — once you manage to get rid of the first half, the second half is even easier.”

During the course of the group’s research, an inevitable question arose: What eventually replaced Earth’s atmosphere? Upon further calculations, Schlichting and her team found the same impactors that ejected gas also may have introduced new gases, or volatiles.

“When an impact happens, it melts the planetesimal, and its volatiles can go into the atmosphere,” Schlichting says. “They not only can deplete, but replenish part of the atmosphere.”

The group calculated the amount of volatiles that may be released by a rock of a given composition and mass, and found that a significant portion of the atmosphere may have been replenished by the impact of tens of thousands of space rocks.

“Our numbers are realistic, given what we know about the volatile content of the different rocks we have,” Schlichting notes.

Jay Melosh, a professor of earth, atmospheric, and planetary sciences at Purdue University, says Schlichting’s conclusion is a surprising one, as most scientists have assumed the Earth’s atmosphere was obliterated by a single, giant impact. Other theories, he says, invoke a strong flux of ultraviolet radiation from the sun, as well as an “unusually active solar wind.”

“How the Earth lost its primordial atmosphere has been a longstanding problem, and this paper goes a long way toward solving this enigma,” says Melosh, who did not contribute to the research. “Life got started on Earth about this time, and so answering the question about how the atmosphere was lost tells us about what might have kicked off the origin of life.”

Going forward, Schlichting hopes to examine more closely the conditions underlying Earth’s early formation, including the interplay between the release of volatiles from small impactors and from Earth’s ancient magma ocean.

“We want to connect these geophysical processes to determine what was the most likely composition of the atmosphere at time zero, when the Earth just formed, and hopefully identify conditions for the evolution of life,” Schlichting says.

MIT researchers have discovered that Earth’s early atmosphere may have been destroyed by thousands of small asteroids, writes Rachel Feltman of The Washington Post. Feltman explains that researchers found, “a real flurry of these small impacts…could have completely ejected the atmosphere.”