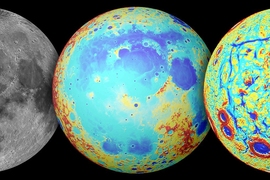 ↓ Download Image
Caption: The moon as observed in visible light (left), topography (center, where red is high and blue is low), and the GRAIL gravity gradients (right). The Procellarum region is a broad region of low topography covered in dark mare basalt. The gravity gradients reveal a giant rectangular pattern of structures surrounding the region.
Credits: NASA/Colorado School of Mines/MIT/JPL/Goddard Space Flight Center 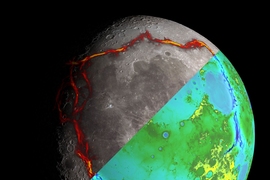 Caption:
The moon as observed in visible light (left), topography (center, where red is high and blue is low), and the GRAIL gravity gradients (right). The Procellarum region is a broad region of low topography covered in dark mare basalt. The gravity gradients reveal a giant rectangular pattern of structures surrounding the region.
Credits:
NASA/Colorado School of Mines/MIT/JPL/Goddard Space Flight Center

New data obtained by NASA’s GRAIL mission reveals that the Procellarum region on the near side of the moon — a giant basin often referred to as the “man in the moon” — likely arose not from a massive asteroid strike, but from a large plume of magma deep within the moon’s interior.

The Procellarum region is a roughly circular, volcanic terrain some 1,800 miles in diameter — nearly as wide as the United States. One hypothesis suggested that it was formed by a massive impact, in which case it would have been the largest impact basin on the moon. Subsequent asteroid collisions overprinted the region with smaller — although still large — basins.

Now researchers from MIT, the Colorado School of Mines, and other institutions have created a high-resolution map of the Procellarum, and found that its border is not circular, but polygonal, composed of sharp angles that could not have been created by a massive asteroid. Instead, researchers believe that the angular outline was produced by giant tension cracks in the moon’s crust as it cooled around an upwelling plume of hot material from the deep interior.

Maria Zuber, the E.A. Griswold Professor of Geophysics and also MIT’s vice president for research, says that as cracks occurred, they formed a “plumbing system” in the moon’s crust through which magma could meander to the surface. Magma eventually filled the region’s smaller basins, creating what we see today as dark spots on the near side of the moon — features that have inspired the popular notion of a “man in the moon.”

“A lot of things in science are really complicated, but I’ve always loved to answer simple questions,” says Zuber, who is principal investigator for the GRAIL (Gravity Recovery and Interior Laboratory) mission. “How many people have looked up at the moon and wondered what produced the pattern we see — let me tell you, I’ve wanted to solve that one!”

Zuber and her colleagues publish their results this week in the journal Nature.

Making less of an impact

The team mapped the Procellarum region using data obtained by GRAIL — twin probes that orbited the moon from January to December 2012. Researchers measured the distance between the probes as they chased each other around the moon. As the leading probe passed over a region of lower density, it briefly slowed, caught by that region’s gravitational pull. As the probes circled the moon, they moved in accordion fashion, the distance between them stretching and contracting in response to varying gravitational attraction due to the mass variations in the lunar interior.

From the variable distance between the probes, Zuber and her team determined the strength of gravity across the moon’s surface, creating a highly detailed map, which they then used to determine where the lunar crust thickens and thins.

From this mapping, the researchers observed that the rim of the Procellarum region is composed of edges that abut at 120-degree angles. As asteroid impacts tend to produce circular or elliptical craters, Zuber says the Procellarum’s angular shape could not have been caused by an impact.

Instead, the team explored an alternative scenario: Some time after the moon formed and cooled, a large plume of molten material rose from the lunar interior, around where the Procellarum region is today. The steep difference in temperature between the magma plume and the surrounding crust caused the surface to contract over time, creating a pattern of fractures that provided a conduit for molten material to rise to the surface.

To test the hypothesis, the researchers modeled the region’s gravitational signal if it were to contain volcanic intrusions — magma that seeped up to just beneath the moon’s surface and, over time, cooled and crystallized. The resulting simulation matched the gravity signal recorded by GRAIL, supporting the idea that the Procellarum was caused by a magma plume, and not an asteroid.

“How such a plume arose remains a mystery,” Zuber says. “It could be due to radioactive decay of heat-producing elements in the deep interior. Or, conceivably, a very early large impact triggered the plume. But in the latter case, all evidence for such an impact has been completely erased. People who thought that all this volcanism was related to a gigantic impact need to go back and think some more about that.”

Ultimately, proving that the moon may have harbored an ancient plume may require a new lunar mission, involving a long-lived geophysical network to monitor seismic and heat signals from the deep interior, according to Clive Neal, a professor of civil and environmental engineering and earth sciences at the University of Notre Dame.

“It comes to trying to understand the nature of the interior, and how extensive was this concentration of heat-producing elements that would’ve caused a plume to surface,” says Neal, who was not involved in the research. “GRAIL has been a fantastic mission, and this data will be continually used and reinterpreted as we get more data back from the moon. I don’t think we’ve seen the last of this data by a long shot.”

Macrina Cooper-White of The Huffington Post writes that MIT researchers have found evidence that the giant basin on the moon was created by ancient volcanic eruptions and not from an asteroid impact. An asteroid would have created a circular basin, but researchers found that the basin is actually more rectangular in shape, Cooper-White reports.

Jonathan Amos of BBC News reports that MIT researchers have identified a large rectangular feature on the moon. “The 2,500km-wide structure is believed to be the remains of old rift valleys that later became filled with lava,” writes Amos.

Washington Post reporter Rachel Feltman writes that researchers have found evidence that the moon’s basin was formed by magma flows. "For anyone who's ever looked up at the moon and wondered why it has this pattern on its surface — now we have an answer,” says MIT Vice President for Research Maria Zuber.