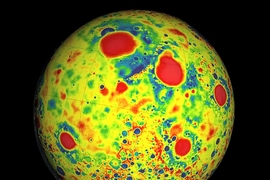 Caption:
This illustration shows the variations in the lunar gravity field as measured by the Gravity Recovery and Interior Laboratory (GRAIL). Red corresponds to mass excesses and blue corresponds to mass deficiencies.
Credits:
Image: NASA
Beneath its heavily pockmarked surface, the moon’s interior bears remnants of the very early solar system. Unlike Earth, where plate tectonics has essentially erased any trace of the planet’s earliest composition, the moon’s interior has remained relatively undisturbed over billions of years, preserving a record in its rocks of processes that occurred in the solar system’s earliest days.

Now scientists at MIT, NASA, the Jet Propulsion Laboratory and elsewhere have found evidence that, beneath its surface, the moon’s crust is almost completely pulverized. The finding suggests that, in its first billion years, the moon — and probably other planets like Earth — may have endured much more fracturing from massive impacts than previously thought.

The startling observations come from data collected by NASA’s Gravity Recovery and Interior Laboratory (GRAIL) mission. Since March, the mission’s twin spacecraft, named Ebb and Flow, have been orbiting the moon and measuring its gravitational field.

From GRAIL’s measurements, planetary scientists have now stitched together a high-resolution map of the moon’s gravity — a force created by surface structures such as mountains and craters, as well as deeper structures below the surface. The resulting map reveals an interior gravitational field consistent with an incredibly fractured lunar crust.

“It was known that planets were battered by impacts, but nobody had envisioned that the [moon’s] crust was so beaten up,” says MIT’s Maria Zuber, who leads the GRAIL mission and is the E.A. Griswold Professor of Geophysics in the Department of Earth, Atmospheric and Planetary Sciences. “This is a really big surprise, and is going to cause a lot of people to think about what this means for planetary evolution.”

Zuber and her colleagues detail their findings from GRAIL in three papers published this week in Science.

GRAIL’s lunar gravity map has also revealed numerous structures on the moon’s surface that were unresolved by previous gravity maps of any planet, including volcanic landforms, impact basin rings, and many simple, bowl-shaped craters. From GRAIL’s measurements, scientists have determined that the moon’s crust, ranging in thickness from 34 to 43 kilometers, is much thinner than planetary geologists had previously suspected. The crust beneath some major basins is nearly nonexistent, indicating that early impacts may have excavated the lunar mantle, providing a window into the interior.

To generate the gravity map, GRAIL’s two probes measure the changing distance between themselves as they orbit in tight formation around the moon. As one of the probes flies over a large mass, such as a mountain or dense, underground rock, the stronger local gravity will pull that probe ahead, widening the space between the two spacecraft. Scientists can translate this changing distance into a gravitational map, representing the gravity produced by both the surface structures and the interior.

To find the gravitational field for the moon’s interior alone, Zuber’s team used topographic measurements from another of their instruments, a laser altimeter aboard the Lunar Reconnaissance Orbiter, a separate spacecraft in orbit around the moon. The scientists calculated the gravitational field expected to be produced by the moon’s topography — its surface structures alone — then subtracted that field from the field measured by GRAIL.

“It’s essentially like removing a veil to reveal the gravity due to the inside of the planet,” Zuber says. “And when we saw those maps, we were just speechless.”

Compared to the surface, the map of the interior looked extraordinarily smooth. In fact, the team found that most of the moon’s local gravity is due to surface features, such as crater rims and mountains. Except for the large impact basins, the moon’s upper crust, largely lacks dense rock structures, and is instead likely made of porous, pulverized material.

The interior map did reveal long, linear structures of denser material, which Zuber and her team believe to be buried lunar dikes — formed from magma that seeped into large fractures in the crust, and then solidified into dense walls of rock. These dikes represent evidence for expansion of the moon in its earliest history. But overall, 98 percent of the lunar crust is fragmented — a clear remnant of very early, very massive impacts.

“This is interesting for the moon,” Zuber says. “But what it also means is that every other planet was being bombarded like this.” The resulting fractures, she says, affect the way a planetary body loses heat and also provide a pathway for the transport of interior fluids.

David Kring, a senior staff scientist at the Lunar and Planetary Institute in Houston, says knowing the extent of pulverization in the moon’s crust is an essential detail needed to determine the moon’s bulk composition. Such information would go a long way toward identifying the processes the formed the moon and other planets.

“The staggering quality of the data reported by Professor Zuber and her colleagues is amazing,” says Kring, who was not involved in the research. “The data are exciting because they foretell far more insights than are captured in these initial three papers.”

In addition to GRAIL’s discoveries, Zuber says another major accomplishment has been the performance of the spacecraft themselves. To achieve the mission’s science goals, the two probes, which can travel more than 200 kilometers apart, needed to be able to measure changes in the distance between them to within a few tenths of a micron per second. But GRAIL actually outperformed its measurement requirements by about a factor of five, resolving changes in spacecraft distance to several hundredths of a micron per second — one twenty-thousandth the velocity that a snail travels.

“On this mission, with two spacecraft, everything had to go perfectly twice,” Zuber says, adding proudly: “Imagine you’re a parent raising a twins, and your children sit down at the piano and play a duet perfectly. That’s how it feels.”