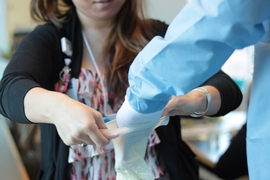 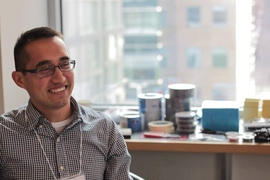 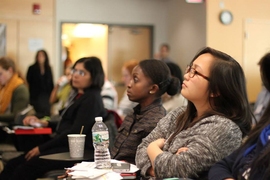 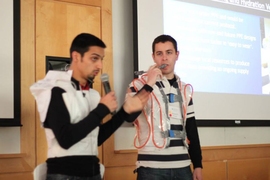 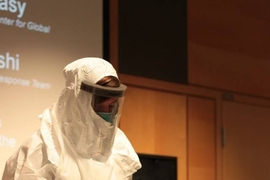 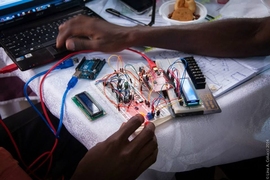 Bryan Ranger, a third-year doctoral student in the Harvard-MIT Health Sciences and Technology program, was the student lead for MIT’s participation in the weekend event Stop Ebola Hackathon (Dec. 13-14). The event was sponsored by the Massachusetts General Hospital (MGH) Center for Global Health, MIT Hacking Medicine, and other organizations. It drew more than 100 participants, who heard from front-line medical workers about their experiences dealing with the Ebola outbreak in West Africa, and then spent the weekend in teams attempting to devise ways of addressing the hardships and issues of working against a deadly disease under difficult conditions. MIT News asked Ranger to describe the organization and the outcome of the weekend hackathon.

Q. What is the group MIT Hacking Medicine, and what was the idea of this weekend’s event?

A. MIT Hacking Medicine is an organization on campus that consists of students as well as other members of the greater Boston healthcare community. Our mission is to bring different stakeholders together to come up with innovations and solutions in the healthcare space. To that end, we help coordinate hackathons to encourage unlikely players to work together on solving real medical challenges. MIT Hacking Medicine has held more than 20 hackathons, and in some cases, teams have even gone on to form successful companies to turn their ideas into a reality.

This weekend’s event, which was primarily organized by the MGH Center for Global Health, focused specifically on driving innovation for frontline healthcare workers and patients dealing with the Ebola outbreak in West Africa. The hackathon kicked off with several speakers, including a nurse who just recently volunteered with Medecins Sans Frontieres in Liberia. She, along with other speakers, shared their experiences and their challenges, which nicely led into a “pitching session,” where participants proposed possible solutions to the challenges they heard about. Participants then formed diverse teams (consisting of clinicians, business people, designers, and students) and spent the remainder of the weekend developing their ideas together. At the end of the hackathon, each team made a three-minute pitch about the innovative solutions they came up with.

Q. What kinds of ideas were people able to come up with in such a short time? Were there any that seemed promising?

A. Overall, some great ideas were presented, and it was fantastic to see how much the teams were able to accomplish in such a short time! At first, many teams focused on personal protective equipment (PPE), which is a very significant issue for those working on the front lines. These ideas ranged from big challenges like developing an entirely new design for the protective suits people working with Ebola wear to focusing on smaller challenges that could potentially be implemented faster. For example, one team concentrated on ways to prevent fogging of masks, while another worked on a wearable cooling system that could be worn under standard PPE. Small modifications like this wouldn’t require changing the whole 20-step process that professionals working with Ebola have learned and are used to [for donning the protective gear].

There were also other teams that focused on more technically complex solutions that could have farther-reaching impact in healthcare beyond the Ebola epidemic. This included one team’s efforts in developing a computerized facial-recognition system that could be used in the field to quickly link patients with their medical records.

At the end of the hackathon, two teams were given prizes for their pitches. One prize went to the team that developed an idea for a portable containment unit that could quickly be set up at field sites in rural areas as the disease spreads. The other went to a team that developed a concept for a low-cost and sterilizeable wristband device that would measure a patient’s temperature and alert a doctor if a fever was developing.

Q. How did you get involved in the organization?

A. I joined MIT Hacking Medicine this past summer after having a great time participating in their “Grand Hack” last spring. At the event, I worked with a very diverse team on an exciting global health project — it was a lot of fun!

I have a strong interest in global health, so what really solidified my involvement with MIT Hacking Medicine was my participation in a hackathon we held in Mbarara, Uganda, this past summer. I work in prosthetic-device research at the MIT Media Lab, and also co-instruct a course at the MIT D-Lab called “Developing World Prosthetics.” I took this opportunity to pitch a project at the event and subsequently worked with a local prosthetist to brainstorm solutions to some of the challenges he faced. This gave me a unique opportunity to actively engage some of my research work at MIT in a manner and in an environment that involves local stakeholders, which was really exciting.

Since then, I have mainly been involved with the organizational side of hackathons. I enjoy fostering these collaborative environments, and providing participants with experiences that are hopefully as memorable and as enjoyable as my own experience has been with hackathons.

No more crying over spilled milk