No more crying over spilled milk

“Make The Breast Pump Not Suck Hackathon” brings tech out of the bubble and into the bottle.
Cara Giaimo | MIT News correspondent
Publication Date:
Press Inquiries 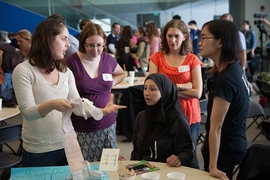 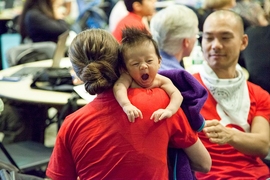 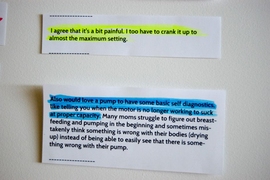 ↓ Download Image
Caption: User ideas for improving the breast pump lined the walls of the hackathon and teams used them as an inspiration board. 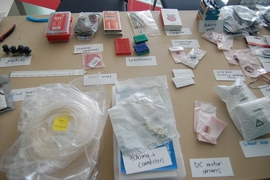 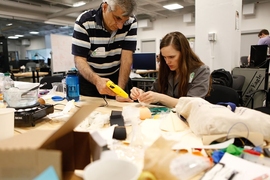 Caption:
User ideas for improving the breast pump lined the walls of the hackathon and teams used them as an inspiration board.
Credits:
Photo: Andrew Whitacre

A few weekends ago, as some techies lined up to buy the new iPhone 6, others flocked to the MIT Media Lab to play with a different piece of technology — one that hasn’t seen an upgrade in decades.

Over the course of that weekend, some 150 engineers, designers, developers, and health care professionals — many of them unaffiliated with MIT — gathered on campus for the “Make The Breast Pump Not Suck Hackathon.” The brainchild of a group of Media Lab students and researchers who are also parents, the hackathon aimed to revamp the breast pump, an aspect of modern parenthood that is nearly as maligned as it is necessary.

Breast milk is the original superfood, full of allergy-fighting antibodies and brain-building fatty acids. The American Academy of Pediatrics (AAP) advises that babies drink it exclusively, if possible, until they’re 6 months old.

Most American mothers return to work much earlier than that — which means that if they want to follow the AAP’s recommendation, they have to pump. An estimated 25 percent of new mothers pump daily, and by all accounts, the experience is no fun: “Instead of snuggling with the baby … we hand [you] this ugly blue machine, and it makes this mechanical sound, and it just sucks milk from your breasts like a milking machine,” says Robyn Churchill, a certified nurse midwife, mother of two, and member of the hackathon’s advisory board. “There’s just nothing about it that is like nursing.”

Organizers asked mothers nationwide how to improve the pumping experience, and were flooded with suggestions; hackathon participants then split into teams based on which problems they wanted to tackle. While many hackathons focus strictly on technological fixes, this one encouraged hackers to think innovatively about anything that might improve the pumping experience — everything from architectural changes, such as private pumping rooms in workplaces, to overhauls of maternity-leave policies.

Some groups — like “Team Batman,” which included engineers, designers, and health care professionals — took on the pump itself. “For new mothers, there’s very often a mindset to just acquiesce and evolve. … [Pumping] is just one more thing where they don’t complain,” says Team Batman leader Erin Freeburger, a mother and user experience designer at SimplyXML. But if asked, Freeburger says, most new mothers will have “the same simple requests.” Her original idea, a CamelBak-style backpack for pumping on the go, fulfilled several: It was discreet, quiet, portable, and hands-free.

To turn this concept into reality, her team faced some engineering hurdles: Despite its name, Team Batman “couldn't figure out how to fight gravity,” Freeburger says, so the backpack evolved into a utility belt, with tubes that bring the expressed milk down into a storage receptacle.

But any pump parts that come into contact with milk have to be cleaned quickly, and tubes are hard to clean — already a common complaint. As one mother pointed out in an anonymous survey, “When you have to pump every two to three hours … the 10 minutes it takes to clean pump parts are precious.”

Two engineers on Team Batman, Don Blair and Ioannis Smanis, figured out a solution: They melted a new base one inch from the zippered end of a plastic baggie, turning it into a one-inch-wide “ZipTube.” “So if you close it, it's a tube, but when you unlock it, you can lay it flat and put it in the dishwasher,” Freeburger explains.

After two days of brainstorming, designing, building, and tweaking, 10 teams presented to a panel of judges on Sunday night. First prize — $3,000 and a trip to California to talk with potential investors — went to Team Batman. Their original idea of a backpack had evolved into the Mighty Mom Utility Belt, a wearable pump outfitted with a quiet motor, easy-clean ZipTubes, and a sensor that makes the pump hands-free.

The members of Team Batman say they recognize that accepting this prize means making a promise. Many ideas born at hackathons never mature: Their creators have other jobs and commitments, and lose their enthusiasm along with their access to institutional support.

“Innovation and awareness are the two things that usually happen out of hackathons,” says Anya Burkart, a biological engineering graduate student at MIT who participated in the hackathon. “For this one, though, I really want real-world application. … We really do need change here.”

The “Make The Breast Pump Not Suck Hackathon” could be a first baby step.

WGBH reporter Gabrielle Emanuel speaks with Research Affiliate Catherine D’Ignazio about how she launched the Make the Breast Pump Not Suck Hackathon as a graduate student at MIT, and how the hackathon inspired new innovations in the breast pump industry. “In no other space of technology would the technology provide for such a terrible experience,” says D’Ignazio of the state of the breast pump.

Barbara Ortutay writes for the Associated Press about several startups aiming to make breast pumps more user-friendly. Ortutay notes that many of the startups, including Mighty Mom Hush-a-Pump, started at the Media Lab’s 2014 “Make the Breast Pump Not Suck” Hackathon.

Catherine Pearson writes for The Huffington Post about the Gala Pump, a compression breast pump designed by Kohana Inc. at MIT’s “make the breast pump not suck” hackathon: “Kohana has run a small clinical trial with 30 moms and says the majority of those women preferred The Gala to their vacuum pumps.”

Beyond STEM to STEAM